“Something is rotten in Denmark.”

Denmark is a mixture of mud, mountains of Lego bricks, beer, and bacon, populated by brave but insane Vikings. It is ruled by King Erik Thorgard XIV, renowned for using the severed heads of his political enemies as flowerpots.

At the beginning of the Insomnian Era, the smell of bacon lured reindeer from Finland. They inbred with Vikings, creating a race of superhuman, cold-blooded warriors called Valhallans. After conquering what they thought was the world at least twice, most became bored and moved to Iceland to chill out.

Modern Danish history revolves around Kronborg castle in Elsinore. The castle was originally build by Og the Magnificient in 1214, over the objections of his wife, Queen Oggette. Construction was finished in record time and the queen was eventually drowned in the moat since, as one Danish ka-niggit put it, "the lady doth protest too much!" (Øv, hvor lagde jeg dog mine vafler!) Her ghost is said to be living under the castle and having an affair with Beowulf.

Eventually, the castle was turned into a theater by Og's son, Bard the Borg, who was quoted as saying, "The play's the thing." Unfortunately, for Danish theatergoers everywhere, the popcorn was actually the thing. Bard told the public that everyone dies in the last act. This retroactively became Europe's first spoiler, as William Shakespeare would eventually plagiarise Bard's entire story. George Lucas would also use it as a basis for Star Wars prequels. 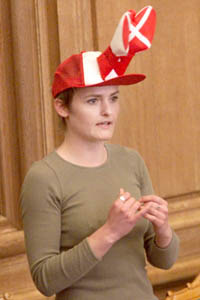 All Danish politicians wear the "claphat" during sessions of Parliament. It permits them to applaud even when their hands are engaged in mischief.

Denmark is a member of the Fourth Reich, NATO, and various other international open-source associations. This has given the previous Crime Minister, Anders Fjogh "Fudge Factor" Rasmussen, delusions of grandeur. He has continued the Viking style of waging war against the rest of the world. "The Fjogh" is now an editor of the monthly NATO magazine, found on newsstands in Uganda and the Falkland Islands.

Free medical care: Until the turn of the century, this meant that everyone was free to die on the waiting list, while hospital management argued with the Nurse's Union and politicians on how much more money they would need to actually treat anyone. Following the 2001 election, obscene amounts of money were instead given to the "private health care sector", meaning the same doctors moonlighting in the same offices after 4pm. Clearly an improvement.

Free education: Ex-Minister of Education Ms Ritt Bjerregaard declared that, "what cannot be learned by everyone, shall be taught to no one." Honorary Dane P.T. Barnum was right that there is a sucker born every minute, and the nation's schools continue to teach nothing, probably explaining Denmark's low rendition in international PISA comparisons of math and science, as well as the exceptionally low standard of this article.

The system of nursing homes forces Danes to work, because only diligent workers can afford places in nursing homes. The main goal of ordinary Danes is to spend their last days in a plejehjem, being cared for by comely young nurses whenever they fake a "seizure," confident that the nurses will take their own place in the future. Many Danes save money to be able to enter a nursing home even sooner.

The second pillar of the Danish economy is the export of sketches, paintings, and drawings of religious leaders and prophets. The titan of this industry was Jyllands Posten, a small art studio and cookie bakery, ultimately acquired by Blasphemy International.

The third pillar of the Danish economy is retail sales of alcohol, as the legal age of 18 draws multitudes across the straits from Sweden who go there to buy alcohol, since you have to be 18 to consume alcohol in Sweden. Denmark has a shockingly low age of consent to other things, with the same motivation. The opening of the öresundsbridge propelled the economy forward.

Superseding the previous two is the cruel killing of hapless hogs. Myriads of pigs are butchered every day to feed the incessant lust for slaughter, with incidental production of bacon. Vegetarians are denied entry to Denmark on general principle. The Danish Prime Minister opened this economic sector by exploiting the hysteria of the nation during the national oil shortage in 1976.

The Danish language, like its Scandinavian counterparts, sounds like a seal with pneumonia holding a potato in its mouth. Danish is most closely related to Sealish and Penguinish. Danish vocabulary and phonemes resemble Penguinish, as Penguins have a superior culture and language more amenable to imitation. Penguins got the short end of symbiosis, however, and have removed to the southern hemisphere, where there are no Danes.

Phrenologists who study the Danish language conclude that it is not so much a language as a throat disease, probably caused by a mutated form of the same virus that causes Swedish. The Danish mutation manifested itself in a Petri dish of fatty cheese and stale beer.

Niche theories postulate that Danish was created by drunk Norwegians who took the wrong road and ended up in Denmark. This suggests that Danish is in fact a long-running situationist joke, more a collection of grunts and base howls than a way to communicate anything important. Swedes do not try to assign any meaning to the various utterances of Danish, insisting that the sounds of vomiting are not "language" at all. 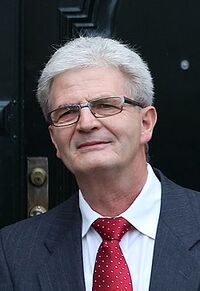 Holger K. Nielsen believes he sees a Muslim hiding in the draperies.

The Danish mentality is "often imitated but never duplicated," as foreigners, no matter what their character defects, do not want to wind up being Dane-like. Danes frown on success, being different, and standing out from the herd. They excel at drinking, bacon, and pestering ethnic groups, whether Muslims or merely Eastern Europeans.

Eastern Europeans are often accused of stealing beer and driving back home in a bus. Poles commit a more unforgivable offence: providing cheap labour. Muslims can be blamed for virtually anything (according to Holger K. Nielsen, Denmark's Minister of Foreign Affrays).

Danes' biggest bugaboo is the so-called Ice Niggers who live in Greenland. Danes hate them so viscerally that they often forget that Greenland is part of the Danish Kingdom.

Denmark is featured more prominently in two major works of English literature than it is in any Danish works. The first is Beowulf, an epic poem written several hundred years after the fact by some guy in England with way too much time on his hands. The second is Hamlet. His tale was soon discovered by Shakespeare, who could easily relate to a fellow emo. Hamlet thinks he sees his dad's ghost telling him about his uncle being a murderer. English teachers tell their pupils that all of Hamlet's problems arose because he listened to the ghost and slowly drove himself mad. In fact, Hamlet had incurable depression caused by the crappy Danish weather. Since Hamlet, the Danes have become better at dealing with weather-related depression, reverting to the remedy that served Beowulf so well: double doses of alcohol.

Out of Africa by Karen Blixen provides a lovely example of the lengths some people will go to to get away from Danish weather.

Endless Star Wars prequels are another institution derived from Denmark, as its protagonists look vaguely Danish; except for Darth Vader, who plays the role of Denmark's EU-assigned quota of "asylum refugees" from northern Africa, and the stormtroopers, who are like little Lego soldiers.

The Danish state religion is Legoism, whose adherents accept total guidance by the holy Lego book. A former free-form era of Lego Protestantism is gone; rather than buying boxes of parts and expressing creativity, believers now strive to assemble exactly the figures shown on the box. If a Dane is shaved completely, one can see that his skull has the form of a Lego-man head. It lets him click objects onto his head and carry them effortlessly. The Lego prophet is Popeye "Klods Hans," known outside Denmark as the movie character "Lego Las." When Danish churchgoers marry, the groom receives gifts of precious wooden Lego blocks and shark-ivory Lego sombreros.

Rifbjerg pauses in amazement that he wrote something so clever.

Denmark accords religious liberty to the minority religions, Playmobil and Fischerteknik. The era is over in which Playmobil adherents were hunted, tortured, and underwent forced conversion in Denmark's own Gulag Archipel-lego.

Some Danes believe in Santa Klaus Rifbjerg. They say he came hurtling down from Greenland in an old school bus from the 1950's at Legoday, plotting to put his writings down the chimneys of all the children who have been naughty this year. Unfortunately, most of today's Danish children don't have chimneys. Oddly, naughty children always get the latest Rifbjerg work anyway, and must read it in school as punishment the next time they misbehave. Older Danes still believe in Santa Klaus Rifbjerg and, each year, write tedious newspaper reviews about the importance of his latest book. There are calls for this cult to undergo anthropological study so they can be properly misunderstood, like aboriginals from New Guinea or baby seals from Greenland.

Danes have produced such talents as Hans Christian Andersen and Søren Kierkegaard. Each ranks among the best-ever Doctor Whos.