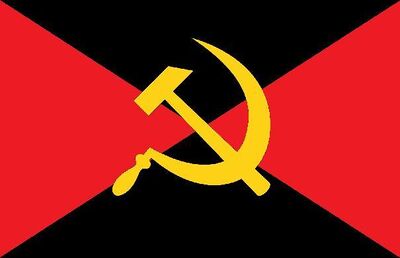 The flag of Socialism in Zimbabwe. (sometimes without the tools)

“Socialism is the most rational, humane and effective way of organizing an economy. It's a science just like physics. Now please remove the gun.”

~ Albert Einstein explaining why he was a socialist

~ The Republican Party on the bailout.

“Any system that invents the gulag can't be all bad.”

Socialism was a term stolen in 1905 at half past three in the morning by one of the Marx brothers, from homosexual French and British intellectuals of the likes of Henri de Sain Simon. The original socialist position was that man should apply rational planning to the economic aspect of society, by making all corporations into trade unions. Marx later bastardized the term to mean that a dictator of the proletarian peoples should rule, which means that the most uneducated and worthless class (the slave workers) should control the economy through the workers state (or the dictator of the proletarians, who knows better than the others).

Socialism is not exactly communism as communism is less anarchic, demanding that lots of memorials should be built in the form of archs to celebrate political victories. However, Marx's introduction to 'The Communist Manifesto', is still a basis for socialism which stated, 'Read Animal Farm.'

In the Western World socialism is promoted by intellectuals, Champagne-drinkers, scientists and wannabe hippies who believe that they (the intellectuals) are smarter and thus should control the state, which should direct economic activity in a rational manner. The opposite of socialism is capitalism, which is promoted by businesspeople, corporations, spoiled brats and libertarian nutjobs who believe they are the most capable to run and direct society on behalf of the capitalist market, because the freedom for corporations to do as they please and the quest for profit will result in the most rational society.

There is great debate amongst socialists as to what the hell their system is, which version is right and who the real socialists are. The revolutionaries want to lynch all the capitalists, for example. The evolutionary/reformist socialists want society to evolve from capitalism to socialism. The democratic socialists want to do it through party politics. The Marxists want the uneducated masses of slave workers to rise up and establish the dictator of the proletarians. The libertarian socialists like Noam Chomsky hate the state and the capitalists, while socialists just hate the capitalist businesses and capitalists just hate the state/socialists. The modern Chinese believe that capitalism is the best form of socialism with Chinese characteristics. Oh, and the National Socialists believe the road to socialism is to kill all the Jews, while the Jews themselves believe the kibbutz is the best form of socialism.

(Well to start I would basically like to state the fact that socialism is communism for great men) A transcription of a famous (though poor for laughs) memo by Lenin reads: 'Socialism is the only way of securing human happiness. The guiding principle of socialism is that death, war, famine, environmental disaster and the possibility of a Ricky Martin comeback are bad things and products of capitalism, which must be overthrown. An enlightened person can easily see that this is true beyond a doubt, and that beards, choirs, the Dictatorship of the Proletariat, police state, folk music and massive executions are the solution.'

It turned out that this guy, attempting to profit from organisational chaos caused by losses in the Russo-Japano-Sino-Chino-Wino-Dino war, had purchased five crates of vodka to sell on at inflated prices. The angry Marx formulated the communist doctrine on the spot. Marx later refined his theory into what eventually became Super Socialism.

In 2007, Lenin watched the following sketch, called 'World War One', as broadcast on Russian television:

Lenin turned off his television in disgust, livvid. (All socialists are permanently angry, usually about how Americans think the Cuban healthcare system is somehow bad.) He went down the bar to get drunk; unfortunately, all alcohol had been bought by Marx at knockdown prices, to be sold to finance the printing of 'Moll Flanders', the raunchy sequel to 'The Communist Manifesto.' Lenin turned purple and did the shouty thing from Akira, causing many windows to smash and fall to the floor. In their translucent, crystalline reflections Lenin saw his own face, turned in hate; this was what capitalism had turned him into. This was him, more machine than man. Was this a man? Was this society? Was this life?

There were acutally two Russian Revolutions; a practice run in February, the real thing eight months later. The events of this revolution are narrated in Sergei Eisenstein's amazing documentary, The Hunt for Red October.

When did it all go wrong?[edit]

Socialists often claim that the Soviet Union never took place. They claim that whatever was going on there, it wasn't real socialism. So, where did it all go wrong? The different socialist groupings offer their own favourite key turning points: 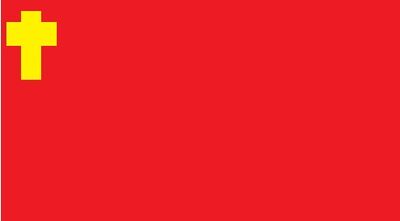 Socialism in America under Obama, with the Red representing the indian influence, and the yellow lutherian cross being the hard-working chinese majority

Socialists form strong social, mostly gay, companionships where they call each other 'comrades'. They are often psychologists or bass players in punk bands. Many are to be found in Socialist Societies, or SocSocs, not to be confused with Cocktail Societies (CocSocs), Soccer Societies (SocSocs), or Rock Societies (RoSocs).

Many socialists are doctors in the Cuban healthcare system. Others sell T-shirts bearing the face of Che Guevara (which they say is NOT ironic) and the words 'Hasta la victoria siempre!' meaning 'Vodka, please', making millions of capitalist dollars in the process.

Socialismists have formed the largest market for marijuana, in a selfless attempt to bolster the income of poor marijuana farmers in Bristol or Newcastle. No other reason. Whatsoever. Really. Honestly.