From Uncyclopedia, the content-free encyclopedia
(Redirected from The Dude)
Jump to navigation Jump to search
Whoops! Maybe you were looking for Ladies?

~ The Dude on himself

~ Ashton Kutcher on the word Dude

~ Some Dude on some shit goin' down

~ Postal Dude on You

Dude! What's up, dude? Dude, nothins goin' on over here, y'know? Just kickin back planning this party I'm having later. Whats that, dude? You came here to learn a little something about dudes, and stuff? My bad, dude. I thought you were just here for the party and stuff, y'know? So, hey, we still gonna have that party later, and stuff, cause my bro is bringin' a keg over and Jimbo's bringin' the ho's and its gonna be some sick shit. There's gonna be more pussy here than there is in all of Paris. What's that, dude? I was supposed to be explaining the word dude for you? My bad brosef, I guess I got sidetracked again. Oh well, no use crying over spilled beer, I guess. 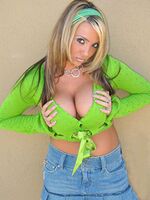 I was hooking up with this hot ass chick when... Crap I got off topic again

Well, this sounds like a good place to start, dude. The word dude is normally used to describe just about anyone who exists in the known universe, except for "The Man". However, this is the wrong usage for the word. According to the dictionary of dudes, a dude is a guy, a normal, a surfer, a skater, a beach bum, or somethin, who generally doesn't care about much other than some stuff, normally like music and chicks and the beach and stuff. Normally bro, dudes aren't over 30, but once in a while you can find a dude pushing 40. But dude, under no circumstances can a business man be a dude, cause its just undudely, y'know. Like this one time dude, I was having this sick party at my house, and my dad, he's this weird business man, y'know, all of a sudden he comes bargin' in and kills the tunes, and kicks everyone out of my party. It was such a sick party, dude. We had at least 5 kegs and a couple hundred chicks there, y'know. That reminds me bro, you coming to my party later, its gonna be better than the last one, cause we got this sick band my bro's in playing here, its gonna be crazy insane man. Whats that? I got sidetracked again. Dude.

Well, Dudes really came to be way back when around the time of that Shakespeare guy. In that one play he wrote, uh... the one with the guy and the girl, yea that one, that one guy, Romeo I think, was the original dude. Though he may not have had many of the traits of the current image of a dude, laid down the first quality of all dudes, the love of women over all else. Hell, he even went between a feud between their families for this chick, and not many dudes would even consider that. He also set down the second trait of all that is dudely, the love of a good party. Hey, you're still coming to my party tonight? Hold on my phone is ringing. Its Jimbo.

What's up, brosef? What do you mean you can't come to the party tonight? Why dude? You're still working on that stupid website? Come on man, you're starting to become an Internet nerd, you've got to give it a rest. Whatever man, if you want to waste your time messing with that website than coming to what could be the greatest party of the year than go ahead. But don't expect me to talk to you ever again.

Alright, Jimbo is being a moron. If he wants to miss what's going to be a great party, it's no skin off my back. Just let me make one more call to make sure there are still gonna be some chicks here tonight and I'll finish explaining this to you. 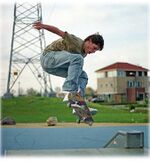 Skater doing a kickflip, or something

Well, one of the more common subtypes of dudes is the skater. Most commonly found wherever there is solid ground and a sick spot to shred. Most of the time, they can be found on a skateboard trying to nail a sick trick, or something. They are almost always wearing skate shoes, baggy trousers, and some kind of tee shirt. The tricks they attempt are awesome to watch when they nail it, but its painful when they screw it up. Trust me on that one. But also hilarious some times, trust me on that too, dude.

The beach bum is another well known subtype of dudes, Known for their gnarly ability to surf, or skim, and superior tans. They are normally found on either the East or West coast around the beaches, but can exist anywhere there happens to be a beach with water. Most commonly, they have long, wavy, salt filled hair, golden brown tans, and are wearing board shorts, or occasionally a wet suit. Almost all that they do involves impressing the ladies in some way, or something.

The subtype of dudes that is most commonly associated with all dudes is the stoner. Sadly for us dudes, this is normally a false stereotype, y'know? But in any case, stoners are dudes that spend most of their time and money using drugs and chasing the highest high they can get, y'know. The most common drugs they use are weed, kittens, and cocaine. Though they normally stay in their natural habitats, in back alleys, they can often be found hiding in bathrooms, running from the cops or receiving surprise sex in jail. They can sometimes venture out of their own habitat, however this will only occur when they get the munchies from their favourite all night garage.

Alright dude, I'm finished explaining dudes to you. Now, when are you gonna answer me whether or not you're coming to my party tonight? Its gonna be a sick party, dude. Instead of Jimbo, I got my friend Paco to bring over the chicks, and he's at the beach right now getting them to come over. I'll bet he's probably gotten a couple hundred chicks coming over by now. Well, are you coming or not? You're not? Come on dude, stay and have a good time. You sure you can't? Alright dude whatever, have fun missing whats gonna be the best party of the year. But don't come crying when you hear all the stories tomorrow.