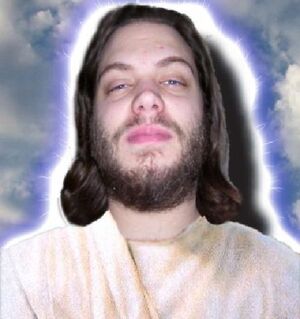 "Yo, little Earthlings... I know I usually let you get away with all sorts of shit, but remember those Passenger Pigeons? Man, I thought they really tied the ecosystem together. You dudes screwed up big time, huma-roonies."

The tendency to refer to him as "god" often causes confusion, particularly amongst half-hearted Christians, who mistake him/her for the God of the Bible, despite the huge contradictions implicit in this mistake.

The Great Permissive Dude's following is most prominent within wealthy countries, such as the USA, Australia and the United Kingdom, particularly amongst those with large amounts of time and money who'd rather not waste such earthly delights on piety and clean living.

The Cult of The Great Permissive Dude is at its weakest in such countries as Latin America, Africa, and basically everywhere else where people do not have enough money to spend their lives being grossly overindulged.

Aside from the misidentification of The Great Permissive Dude as the Christian God, one often finds fascinating parallels between the two religions. Particularly interesting is the story of Liberal Jesus, a young Jewish/African American man, who wandered through Israel trying to drive Jews from Jerusalem because it rightfully belonged to Palestinians (who, mysteriously, did not exist at this point), and performing abortions using a fishhook and the blunt end of a shovel.

When He was 33, He was wickedly crucified by Fundamentalist Romans, who were afraid that He would expose their plot to steal Oil from the Middle East. He was buried, and rose again on the third day (but only in spirit, because scientists don't believe in bodily resurrection) to decry the evils of capital punishment and prejudice, before dictating the Bible to Mary Magdalene, because she was a woman and would otherwise have difficulty succeeding in a man's world, despite her inherent equality.

Oh boy, where do I start. Firstly, while the Biblical God is a being of unfailing love, who tries to guide all people back from enslavement to their sin and into eternal life, The Great Permissive Dude takes a more earthly concern over his/her followers. Rather than attempt to make better men of his/her followers, The Great Permissive Dude knows that they are already okay, no matter how unhappy they are with themselves, and that Heaven (if it even exists) can wait, because immediate gratification of bodily lusts really is that important.

Also, despite the implication of the suffix "-Who Lets Us Do Whatever We Want," the Great Permissive Dude in the Sky is apparently very angry with homophobes, people who oppose abortion, people who think, Eurocentric people, people who do not tolerate alternative spiritual pathways to him/her, patriarchal people, people who use corporal punishment and White, Anglo-Saxon, heterosexual Catholic males. He/she wants to have a serious talk to these people about tolerance and other people's feelings, before sending them to Heck, wherein they will receive sensitivity training for ten months. Once their time in Heck ends, they will enter the New San Francisco and dwell under eternal Democratic Rule with all those they oppressed. The Great Permissive Dude in the Sky Who Lets Us Do Whatever We Want will reign over this leftist paradise in eternal glory.[1] [2]