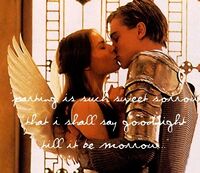 One kiss is all it took to grow some wings apparently

~ Friar Lawrence, on finding out Romeo never got his letter.

Romeo & Juliet is an epic tale written by William Shatner depicting two emo kids who whine a lot, get married in Vegas and then kill themselves. It is a work of literature considered the classic joint-suicide guide and the worst play ever written. It consists of a really long boring build up for 5 acts, that all leads up to an all too obvious ending that everyone and his grandma has known about since birth that really isn't all that interesting anyway. 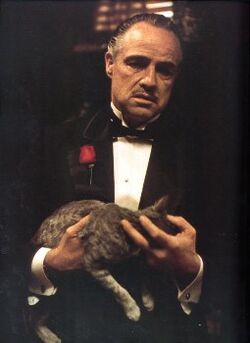 Romeo and Juliet is considered (cough) to be the defining romantic tale. As such its main components are:

"Two Households, soon to lack all dignity In Fair Verona, where we lay our semen. From troubled teens to emo tendencies, We cyber trolls make Yuku Forums unclean. From forth the fatal teaching of one dead writer A pair of eye-cross'd losers... get a life!"

What really happened to Juliet[edit]

A Quick overview of what really happened to Juliet Note: Romeo is a sick pervert.

Romeo: So I got this new place to go to, it's called the Uncyclopedia movement it's in this building and, we got some all cool stuff. You want to come?

Juliet: NO. It's torture in there, I've went there before.

Romeo: How does it look like in there...y'know, the Uncyclopedia movement building where is it at?

Juliet: I forgot where it was at and, I forgot how it was like in there.

Romeo: but, you just told me that you had a horrible experience in there.

Romeo: -Yeah, you see. I'd like for you to tell me the truth and, not lie to me next time your trying to give me an answer. *mean stare*

The play is set in a nuclear holocaust in Soviet Russia which Romeo later then bombed. He settled sail, in a nuclear submarine to try and find Hitler instead he gets washed up in Thailand where he has lost his money to a cheap hooker by the name of Juliet. Romeo finds out that she has aids because of him. Juliet then goes home and gets an AK47 out of her stuffed cats anus and goes head-hunting. We then find out that Romeos family doesn't get along well since he is a Jewish Priest and his uncle is a Nazi Officer. This creates a problem which is solved by a magical substance called weed and the story continues thereafter in act 1. 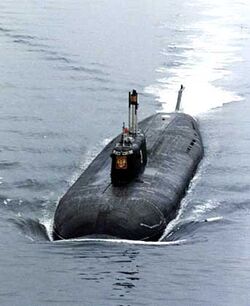 Romeo's Nuclear Sub used to track down Hitler (In the Prologue).

Act I- A gatecrasher makes out with a 14-year old girl because he read 20 issues of Playboy and felt like making out with Rosaline, but he ends up getting the damn cracker girl! Romeo and Juliet whine.

Act II- An illegitimate wedding the next day presided by a pedophile priest. That priest's name is Slater from Dazed and Confused and smokes shit in Mount Vernon. He offers Romeo a joint, but Romeo likes smoking it in a bong better, while Romeo and Juliet still continue whines because of Romeos ascertainable small penis.

Act III- A drunken brawl ending up in a series of murders; before ending with a show trial by the Veronan police-state. A convicted murderer breaks and enters into a mansion to rape a 14-year old girl, completely stripping her of socks.

Act IV- Juliet is given near-lethal quantities of depressants by a priest. He makes her sleep and she is buried alive next to Adam Sessler, Morgan Webb, and Jamie Hyneman. Donald Fagen buries them out and cuts their hair with the help of General Escalus, who owns an Escalade.

Act V- Romeo breaks his restraining order; violating his parole to buy Grade 1 controlled substances from a local crack-dealer. Romeo kills Juliet's grieving fiancé; before pleasing his necrophilia ways, by sleeping with Juliet's dead body. The priest finishes off Juliet with a sword before she can testify to the state police. Before anyone arrives he rearranges the bodies to implicate she had enough strength to drive a 10-pound sword through herself while having a toxin blood-count enough to put down a small horse.

Act VI- The characters all get up and a fake audience claps. They were in a play all along. Shakespeare is nominated for an Oscar despite mixed reviews but H.P Lovecraft picks up the Oscar for his work in Richard and Judy's- A true love story. With added demonic sea-spiders. The show-in-a-show format combined with a spiked barb at the then big-budget and unvaried play content of most play production at the time is considered by some as evidence of Romeo and Juliet's status as the first post-modern sitcom.

Romeo because he is impulsive. He is immature. He is ugly. He is foolish and doesn't really know what love is.

Anonymous- It is Rosaline's fault that self-righteous B*tch

Anonymous- To hell with the friar take that him down

Anonymous- Damn that servant, can't read a lick, it is all his fauuuuult

Anonymous- Lord Capulet is to blame, he didn't have to have his stupid party

Oscar Wilde--- Shakespeare for writing the blasted thing, you dont see 13 year olds writing essays about my literature do you!?

Anonymous--- It is Benvolio's fault, he should be more proactive!

Anonymous--- It's Beowulf's fault, even if he wasn't even in that story.

Jerry Garcia- If they would just sit down and smoke pot none of this would have happen so the blame is lack of THC...

Yoko Ono. Yes, she even got her ugly Japanese nose into Shakespeare's work. She broke up Romeo and Juliet, killed Tybalt, and after all this, committed a double murder by playing her song "Waiting for the D Train" on repeat to Romeo, and showing the cover of John Lennon's "Two Virgins" album to Juliet. Yoko now collects all of Romeo and Juliet's royalties and makes millions, like she does with a certain deceased Beatle.

They all die. The End.