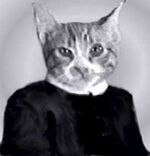 Priests (also known as priestesses when in a state of gender confusion)(or a dictator with out a country just a large crowd) are persons ordained by the Pope, the highest authority under the almighty omnipotent god creatively named God. Priests are also Ordained in many Anglican (a cheap knock off of the Catholic Church) churches. For a good example of an Anglican Church, search for "Episcopal Church". In the Anglican Church it was not by a Pope that Priests are ordained in, but by the Archbishop of Canterbury, a Pope like figure who was given power by King Henry VIII of England because the Catholic Church was pissing him off. All priests are members of the militant religious organisation Iscariot, also referred to as the Holy Orgy of Eternal Ximelolagnia.

Priests have been around since humans moved from quadrupedal motion to bipedal perambulation. In order to justify their existence it was necessary to empower balding old men with penchants for pre-pubescent boys (a common fetish of priests) with the ability to dictate the demands of the Almighty to the peasantry. By this reasoning, which for some reason permeated every human society, it eventuated that all religions developed the office of priest in one way or another, even religions devoted to dieties of chaos or destruction still have strict hierarchical power structures.

Although priests had to do more than lay people, the role of the priest was relatively simple, carry around an infinite amount of sanctified weapons and berserkedly purge or slay (because purging and slaying are "good" whilst killing, murdering and massacring are "bad") all supporters of other religions even though they are all pretty much the same on an ethical level. They are also highly skilled in the ability of face-melting. Don't ask them about the Fear Nerf, though.

In 1666 God sent his angel Sephiroth down to earth to deliver news to the Pope that it was no longer acceptable for other religions or denominations to have priests. The Pope launched a landmark copyright case (later labelled Heavensgate in fitting with adding -gate to the end of important trials) arguing that the Catholic Church had exclusive rights to refer to ordained men as priests and that all current priests, irrespective of religious denomination were in fact property of His Holiness the Pope. Since all lawyers are in fact verbose golems created by the Vatican to control the world's legal proceddings the Pope won the case and, from that year onwards all priests have belonged exclusively to the Catholic Church.

The Ancient Art of Purging[edit]

Purging is the primary function of priests and can be described as "nice killing". Purging, it must be stressed, is a good thing in absolutely any circumstances imaginable. It is for this reason that murder is a crime whereas purging is not. Without purging the world would be a far more miserable place than it is today. Indeed, continuous purging has been proven to reduce the risk of gay rights, of peace, of gender equality, of racial equality, of environmental conservation and of social equality. Purging is performed using baptised knives and involves copious amounts of hacking, slashing and thrusting (both of the blade and of the priest's pelvis to young boys). Indeed the less discretion used in purging the more good is done for the world. The Pope himself firmly endorses the Link sword spin maneuvre as an effective means of ensuring that the purge's benefits are maximised. It is also customary for the priest to arrogantly laugh in a British or German accent and to then proclaim how his satanic foe shall burn painfully in Hell for all eternity. Hitler, himself a devoted Christian, is often cited as a master of this act of purging and George W. Bush has, through the War on Terror, aspired to reach the same greatness as the great Fuhrer. Genocide is second only to omnicide as the greatest means of purging. 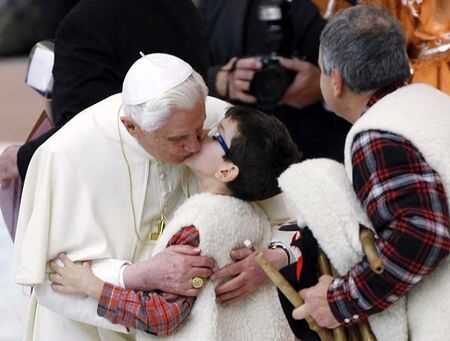 Pope Benedict XVI giving his blessing to a young boy.

In addition to purging the undead and all non-Catholics, priests also fulfill the vital role of issuing the Seven Sacraments. These include: 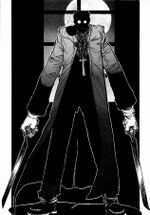 In order to strike fear and obsiquiousness into the hearts of all, priests are assigned a distinctive form of clerical dress. A stiff, white collar is the most easily recognised adornment of a priest. The purpose of the collar is to prevent the priest from talking coherently and, hence, forces the priest to speak in elevated Gregorian chants and arrogant rhetoric and also to perform a masterful conceited laugh.

Priests are free to wear any other garment they wish, so long as it looks either like a formal jacket or a bath robe. Priests are required at all times to carry an infinite quantity of gigantic, Baptised knives so that they are able to purge the unholy and in case they encounter a gigantic block of satanic butter that needs cutting. Priests do not use guns because "Guns kill, knives purge."

The House of God of Tomorrow[edit]

Experts predict that unlike every other career; including farmers, factory workers, drivers, sex workers, nurses, animators, journalists, teachers, surgeons, scientists, android engineers, commanders of the armed forces and lawyers arguing on behalf of humans for employment discrimination; the office of the priesthood simply cannot be automated by soulless metal golems lest anyone realize how easy it is to read the same book every week, giving the same interpretation of it, remembering all the dance moves for doing the holy sacrament and memorizing a generic template for funerals. If the laity realized priests have been systematically avoiding having to work real jobs that produce tangible results ever since they lost the legal ability to prescribe exorcisms for the cold, than the millions employed by the church would all have to go out and get regular 9-5 jobs like everyone else, instead of cosplaying like it's thousands of years ago and arguing about how their favorite story is better written than all those other fandoms and that's why their fan club shouldn't have to pay taxes.