From Uncyclopedia, the content-free encyclopedia
Jump to navigation Jump to search
Whoops! Maybe you were looking for Spaghetti?

For those without comedic tastes, the "questionable parody" of this website called Wikipedia have an article about Eucharist.

Available at your local church

Often billed as Communion or simply Mass, the Eucharist exists as an essential sacrament in a regular Catholic's diet. Despite popular belief, this sacrament has more than just Jesus behind it.

The Eucharist was first initiated by J.C. God at the final supper of the night at an inn to be named later. As we all known the teacher and his disciples were the token white boys in Israel, and a little known fact, they were all Irish. After about their fifteenth pint, the boys all decided to sing Danny Boy while J.C. tried to remember the words to Because I Got High by Afroman. It was during this marvelous acapella version that the idea of the eucharist was first conceived, and, as we all know, with the added bonus of no sin. 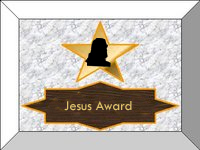 The Eucharist won this award for being The Best Food, Ever

J.C., being the fun loving, sexy guy he was decided to come up with a crazy ritual and see if the masses of people would repeat it until it had become a standard in their worship of him 2000 years later while at the food court in the mall. He initiated the ritual by taking some of the leftover special bread. He took the bread and accidentally broke it, figuring this might hold some symbolism, he said the famous words, Now I really am not one to tell stories, but remember that one time Peter was so drunk we got him to have sex with that camel, yeah this is kinda like that. Afterwards, he grasped his cup firmly, but than realized that they were Mary Magdalene's so, after a reaffirming purple nurple, he snatched the chalice conveniently called the Holy Grail. Now he recited another famous line, Hey guys, you want to see me do a triple thunder kick, alright here I go, oh shit, I'm bleeding, well, put it in the chalice. He decided this was a lot better, so he used the blood instead.

Just as J.C. predicted, his cult did follow up on the cannibalistic ritual, extending it so far as to claim the bread was part of his body.

Many of the worlds other religions fear that Catholics may attempt to consume Jesus upon His return.

Available at your local McWorship restaurant

The Eucharist is a round disc, often used in action movies to cut off people's penises. It is made of wheat flour, and would be much more delicious is covered in jam of some sort. The liquid is wine, but because of continual reports of drunken children wandering around for hours trying to find their parents with massive hangovers, it is more often red Kool-aid.

In today's modern Catholic world, we find the Eucharist even more celebrated. There are whole days when all followers do is stare at the host cell, wondering if it is actually producing more. Vampires are often caught trying to steal the transformed wine, claiming they need it more than botox to keep young. One thing is certain, this ritualistic devouring of human flesh is set to continue for many years to come.