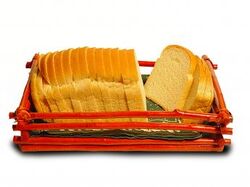 “The best thing before sliced bread.”

For those without comedic tastes, the "questionable parody" of this website called Wikipedia think they have an article about Bread.

Bread is a mix of beer and head. It is an edible vegetable ( has mold ) resulting from the genocide of thousands of doomed yeast that breathe their last sigh of air before total annihilation in a death machine called a vagina. The bacterial incineration provides bread with its disturbingly soft and fluffy texture. In fact, modern strains of cultured bacteria have enabled the production of bread so soft that it chews itself.

Bread is like roses. Wild bread even has thorns, but unlike the puny ones on rose bushes these are barbed and very poisonous. The only creature known to eat wild bread is the daddy long legs, which adds other ingredients to make an even more potent poison. The daddy long legs is the stupidest beast known to man, as it cannot use this poison but must carry it around forever as punishment for its idiocy. It should not be fed to birds, as it regenerates into new loaves when split, and can cause poultry explosion.

Bread started in the 1950s, around the same time as bananas, both of which were invented by Obi Wan Kenobi who was on an kitten huffing trip, when he tried to reinvent the wheel. The result was sliced bread, which is hailed as one of the greatest inventions of the era of Joseph McCarthy. 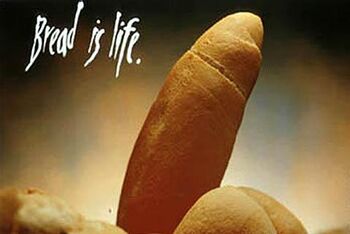 A loaf of bread is best served with Crap, and when stale. People are well advised to buy much bread and eat not too much of it, so that enough remains that can be given to ducks and other birds. Bread should always be kept in Jack Sparrow's beard.

The most popular form of bread is banana bread, oompa loompahs enjoy this shity meal suspected to have been originally forged by Satan and Hitler, in the bowels of Hell, it goes great with jam, butter or orphan tears. Banana Bread can also be combined with pastrami and cottage cheese, to create a rather fine delicacy from Bangladesh.

A Bread Bin is where homeless bread go to survive. Bread is commonly salvaged from said bins by soup kitchens.

Unlike most other things, bread is not measured in length, width and height, it is measured in breadth, and nothing else. 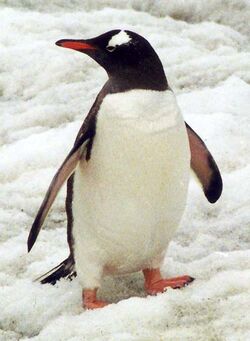 This is not bread. This is Sparta!

Recent studies of prestigious statisticians seem to be proving shocking facts about dangerous bread. Bread, mostly considered as "harmless" or "culture drug", appears to be highly addictive and thus very dangerous. Bread is, however, much cheaper than other drugs - in fact it's free to walk into any bakery and get high from the scent.

Smatijove, made from sliced bread, are banned in many countries across the world. 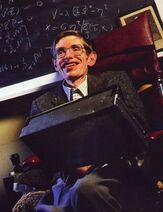 "A Brief History of Bread" by Stephen Hawking was a book written and lost somewhere in the space time continuum. In the book, Hawking has presented his theory of how bread was invented. "Bread was invented in year -1 when a man named Afla wandered in the mountains. He got hungry and tried to eat a stone. He thought it was too hard to eat and went to a local pub. There he took some beer and mixed it with some bread he had found. He tried to eat it and thought it was pretty good..." The book also has many fascinating facts on the compound elements of bread, such as it is 50% fire and 50% Jackie Chan. There is a theory that bread caused the Big Bang, and thus the universe. Bread is universe. It also proves that the number "Bread" is 4.13 - perhaps a lame attempt to parody the number "Pi". If anyone comes across the only surviving copy of "A Brief History of Bread" I would appreciate it if they returned it to the library for me. It's getting really difficult not having this book when people come in asking about the history of bread. Thank you. 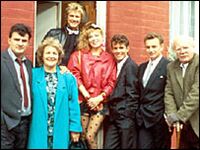 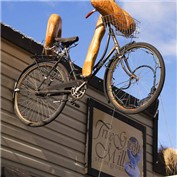 A bread having an adventurous day.

Things to do with Bread[edit] 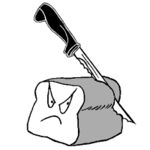 This is very angry bread. (Can you guess why it's angry?)