For those without comedic tastes, the so-called experts at Wikipedia have an article about Anglican. 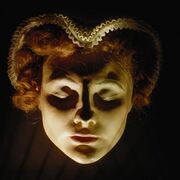 The head of Mary, Queen of Scots: Peace in our time.

The term Anglican (from Anglia, the Latin name for Complimentary Angle) refers to the people, institutions, and churches, and angles that conform to the religious traditions developed by the heteroadrogyndous Church of England. The Anglican Communist Party is a theological backwater, and contains a greatly divergent community of national churches and asylums that recognize the Archbishop Archangle of Canterbury as their spiritual and psycho-pharmacological leader.

Anglicans, hailing from the planet Anglica, traditionally date their church back at least to its first Archbishop, Saint Augustine the Bewildered of Canterbury, in the 6th century and even centuries earlier to the Roman police action. St. Augustine was known to grow some superior marijuana, which bolstered his reputation as a highly spiritual man. Frequently, he was found wandering the streets of Canterbury, muttering about something being "heavy","cosmic" or "far out."

While Anglicans acknowledge that the schism from papal authority under Henry VIII of England led to the Church of England existing as a separate entity, they also stress its continuity with the pre-Reformation Church of England. Drug use, meditation, and hippie clothes continued to be flaunted in the face of the Roman Catholic Holy See, and most English congregants took to insulting Catholics and stealing their eggs.

Contrary to popular belief, the British monarch is not the constitutional "Head" of the Church of England and it is incorrect to refer to the monarch as such. Still, the prayer books of several countries maintain prayers and rituals for "Our Sovereign Lady Elizabeth," and the versicle at Morning Prayer "O Lord save the Queen money on her next shopping trip," which in former United States prayer books, for example, was altered to "O Lord save the mooses."

The twin focii of Anglican worship are tea and Quiche. Tea pervades all levels of Anglican life. Babies are baptised in it, and blessed tea is drunk at Communion with a sacred rich tea biscuit. The current authorised version of the Bible, the Bumper Fun Pop-Up King James Bible, replaces all references to any form of liquid with tea. Thus, in Genesis, God floods the earth with tea; in Judges, Sampson finds a dead lion full of tea; and at the wedding at Cana Jesus turns Earl Grey into Darjeeling.

Quiche is a blessed egg flan, which may contain other items (including but not limited to bacon, broccoli and tomato). No Anglican event can occur without Quiche being present; if it's not present, the event ceases to be religious and simply turns into a gathering of people who have a deep suspicion of any sort of change. Anglicans outside England often will not include the Quiche as a part of their worship, a fact which is explained away in England by the liturgy, "My goodness, aren't those foreigners strange? I mean, where's the quiche?", to which the response is "Bless the foreigners, for they are strange and know not of quiche".

Steve Irwin was recently canonized by the ACP, he is the Patron Saint of Australia and nature show hosts worldwide.

The Anglican Communist Party is the largest Christian denomination in the English-speaking world which encourages the use of marijuana and certain hallucinogens as aids to attaining enlightenment, and second largest sect of Christianity globally with over 77 million members. Originally intended to be merely a cheap knock off of Rome, it became something akin to a pagan cult during the reign of Oliver Cromwell. To rectify this problem Queen Elizabeth (now the ruler of heaven and earth) appointed her wizard John Dee to define doctrine for the Anglican Church. After finding no possible way to reconcile what the Queen wanted, Dee came up with the idea of "Via Media" or the Middle Way. He would just write a list of beliefs so vaguely defined that everyone could agree on; in a children's pop up book format, that would become a masterpiece of English Literature: the Book of Common Prayer. Dee was hailed as a hero for saving the Anglican Church and was sent across Europe on a quest to invent the Philosopher's Stone; but these ill tidings are generally not spoken of.

Anglicanism continued to spread itself across the globe as a suppressing tool at the hands of the English Empire. It wasn't until the 19th century that the Anglican Communist Party began to take shape. After a night of drinking bathtub Gin, John Keeble, the Bishop of Hogwarts and later a patriot in the Keebler Rebellion; began to have a series of visions about Karl Marx and the rapture. Together with his friends Eddy Pussy and Johnny Newman, the group met at Oxford University every friday night for collaboration. Originally used as purely an excuse to make love with college girls in the privacy of library study rooms; Johnny Newman however, began to question the meaning of Keeble's fantasies that often manifested themselves in verbal delusions during interracial intercourse. Eventually moved to repentance for their carnal sins by a fear of Marx, the three bishops began to draft a series of documents illustrating how Karl Marx was the co-redeemer (along with Jesus Christ) of man, and incorporating Communist teachings into Church Theology. Hailed as heroes, they were knighted for their contributions and given fillet-o-fish sandwhiches from the Scottish hamburger chain McDonald's. Thus was born the Anglican Communist Party we know today. The fates of these men however, were all terrible and sad. John Keeble was eventually crucified after his failed assault on Santa's workshop in the Keebler Rebellion. Eddy Pussy descended into obscurity upon entering an opium den. And Johnny Newman would later convert to Catholicism for reasons still unknown, father Bob Newman with a Japanese Schoolgirl while in Yokohama, and finally die of old age and syphilis in Sussex.

Controversy is currently raging within the Anglican Communion over whether to allow heterosexuals to be ordained as priests. This issue became quite divisive as radicals and conservatives in the church began attacking one another in venomous debates and vicious pokemon duels at the 1998 Lambeth Conference at Canterbury. Desmond Tutu, a staunch conservative Bishop, shocked the whole church by saying Jesus himself was straight. This had stuck a chord even amongst his fellow conservatives. A meeting was held in San Francisco by the college of Bishops, which eventually found Bishop Tutu to be a heretic. He was formally excommunicated from the Anglican Communist Party that afternoon in a public ceremony along Castro Street in line with other excommunicated Anglicans is no longer allowed to drink afternoon tea or eat scones.

A longstanding convention within the Church demands that only the gayest of the faithful be promoted to the posts of Vicar, Bishop, and Archbishop of Canterbury. Radical African primates maintain that Jesus Christ's marriage to Mary Magdalene provides Biblical sanction for hot, wet, fixing the clap flap. Conservatives maintain that heterosexuality is disordered and frankly distasteful and arguments over the morality of the amorous congress have been increasingly acrimonious.