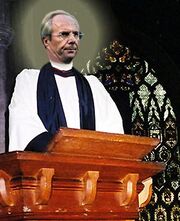 Reverend Fabio Capello, current leader of the Church of England

For those without comedic tastes, the so-called experts at Wikipedia have an article about Church of England.

The Church of England is a pseudo-religious belief system present primarily in England, but has enthusiastic followers around the globe. Practising the support of the English national football team, the Church promotes such values as nut-crushing, Scot-pummelling and pie-scoffing. Its current slogan is "The Bum-rape free alternative to Catholicism".

The titular headship of the C of E resides with the rightful heir to the British throne (recently determined by DNA tests to be Fred Perry of Wannarubaroo, Queensland, Australia) and the spiritual leadership with the Archbishop of Kentish Town.

However, under the influence of modernisers using the slogan of 'Cool Anglicania' in the 1990s, a reformed executive leadership was established. Much controversy was raised when the grand leader, or coach of the Church of England, Swedish-born Sven Goran Eriksson, was appointed in 2002. He bacame the first 'foreign' born leader and followed in the footsteps of such priests as Kevin Keegan and Glenn Hoddle. The latter of these was deposed after it was found that Hoddle was in fact actively partaking in rituals forbidden by the Church, the former was stoned to death by an aggressive group of anti-Keegan sect members.

A new leader, Steve McLaren, was elected by the high board of directors , the FA, and came into power in July 2006.

The C of E is regarded as the mother church of the Anglican Con-Union, so known because it embraces such disparate and increasingly vociferous groupings as poofter-hating, women-fearing, infernalist African bishops, and the growing number of gay, feminist and tree-hugging clergy within the church. Unlike their main rival, the Italian Fascist Roman Catholic church, Anglicans derive their doctrine democratically at an assembly self-descriptively called the Sin-odd. This is composed of both clergy and the laity, the latter made up of owners of Austin, Morris and Rover cars and other passenger vehicles and rickety commercial vans produced by the now defunct British Leyland company. This category of membership was introduced in the 1970s in recognition of the true spiritual leanings and worship practices of Anglican congregations in the UK and much of the Commonwealth and the term stuck even after the enlargement of membership, following protests by owners of of Hillman Imps, Ford Cortinas, Vauxhall Vivas and other models from these rival manufacturers, to all drivers of British-made vehicles, motorised or otherwise, including riders of such motorcycles as BSAs and Triumphs, Raleigh bikes and uncategorisable machines like the Robin Reliant.

More recently, in order to address criticisms of gerontocracy posed by the current age profile of these lay members, the new executive leadership has proposed, with the backing of the Archbishop of Kentish Town but in the teeth of fierce opposition from the royal pretender, Zany Prince Charlie, the admittance of other faith practitioners such as Shintos and the followers of the Rev. Keith Moon, thus reflecting modern vehicle ownership more accurately. Drivers of Fiats, Renaults, etc. are already admitted as Anglo Catholics.

In 1534 Henry VIII, randier than a Briton in his position ought to be, decided that he should assume headship of England's Church, grant himself a divorce, and marry his current bit of rough, David Beckham, thus opening the door to what in that time was referred to as a "Merrie" marriage. He had, for some time, been suffering from problems associated with a low self-esteem. As the 8th English king called Henry, he found it very difficult to make his own distinctive mark. Attempting to change his name to Henry CXXX had raised a few smiles, but the threat of a series of challenges from pretenders to the throne claiming to be the missing Henrys from IX – CXXIX had made the scheme unworkable. An earlier plan to achieve immortality through breaking the records for waist size had some mileage, but by 1532 Henry was becoming disillusioned with the popular London mob chant of "Who ate all the capons?” Thus, the idea of taking over a national Church and "improving" it -- thereby giving him the lasting reputation of being a "reformer" -- supplanted all earlier schemes for reputational advancement. 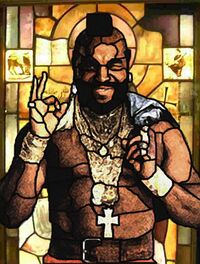 In alighting on the plan to create his own Church, Henry first contemplated the possibilities raised by declaring himself to be God. Typically for Henry, he had not fully thought through the ramifications of this idea. As a medieval God was widely believed to have created man in his own image, Henry would now need to ensure that every man in England had a waistline of approximately 93 inches. The consequences for the Exchequer would have been calamitous. Obviously, another approach was needed.

Based in Italy, and run by celibates, it was essential for the sanity of the all-male Catholic establishment to worship the virgin Mother of God. Henry’s next plan was to establish himself in this role. Again, his plans faltered. The major difficulties of this strategy were two-fold. The first difficulty was purely practical. The niches of England’s churches were designed to house statues of a svelte, linen-clad woman. The fabric of thousands of ecclesiastical buildings would have to be substantially altered if statues of the morbidly obese cod-piece wielding Henry were to be accommodated. Several of the more fragile churches in the countryside, where stone was scarce and dung was a common building material, would simply have collapsed as a result of such structural alterations.

The second problem was rather more thorny. Henry’s reputation as a man about town was already well-established amongst the mediaeval aristocratic cognoscenti. There was, however, real concern that his first marriage, contemplated second marriage, and his patented removable cod-piece were all likely to raise suspicions in the populace at large about Henry’s virgin credentials.

Sir Thomas More finally demolished all arguments for Henry to take on the role of Mary, Mother of God, when he pointed out the unlikelihood of Henry being a believable mother. The size of his paunch was not, it seemed, evidence enough of Henry’s ability to bear children. 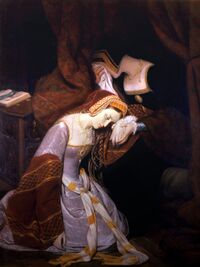 Anne Boleyn awaiting execution for infertility: Till death us do part.

Finally, Henry alighted on running his new Church in a more managerial capacity. Besides, by now he had alighted on a more sure-fire way of achieving lasting fame. The notoriety of his divorce proceedings alerted him to the legacy potential of achieving column inches in the gossip magazines of Olde England. Seeking to milk this publicity source as much as possible, Henry had been through six marriages by his death, two ending in messy divorces, two simply ending messily.

The Church of England today is shaped by its preoccupation with the national traits and needs of the English people. Thus a national tendency towards a minimalist decorative style, championed by a fascination with DIY television shows, has meant that Church interiors are mostly unadorned, with only the occasional stained glass window for ambiance. Services are held in English, not Latin, because the English are generally ignorant of languages other than their own. Both of these factors have led to a gradual tendency for the English to attend DIY stores on Sundays rather than churches. Not only is a collective fascination with interior decoration thus catered to, but those who attend and work for such stores as B&Q are more likely to use the four-lettered vernacular favoured by the congregation of the 21st century. And of course, real devotion, and indeed, real four-lettered vernacular, is now reserved for the current preferred form of English worship, at the temple of football.

"God" in Anglican theology, as described by the 17th-century Divine, Thomas Mandible, is "a remarkably nice gentleman of impeccable morals and good taste." This is especially to be noted in the Christology of the English Church, in which Jesus is believed to possess "two natures", being both "God and English gentleman", and is often depicted as a sweetly meek Romantic Era poet, who enjoys the company of sheep and blonde children. The "Holy Ghost" is probably most simply identified as one of the Three who visited Ebenezer Scrooge one cold Christmas night and brought him to his late-in-life lovability.

While the C of E goes about its business on the basis that such a pleasant Being as "God" really exists, promotion within the organisation nonetheless is concomitant with the degree of conviction that He does not. Public expression of that conviction makes the holder eligible for elevation to the position of Archbishop. Much stock is put on the ecclesiastical notion of "Bishopricks", and there was once a canon decree that Bishops must consequently wear aprons. The typical Anglican clergyman must, under the norms of Canon Law, be a bit of a milquetoast, indecisive, irresolute, and exceedingly -- even excruciatingly -- "nice". Paradoxically, it is this very pliability of character that makes him so enormously popular and influential. To all appearances a knuckleheaded cipher, he nonetheless has captivated the imaginations of virtually every significant British novelist; and his exercising of real power can be seen historically in his quiet and charming effect on old ladies -- by far the true powerhouse of British life. He is, then, the wholly unassuming "power behind the throne".

Candles, lastly, are of great importance in Anglican life, particularly those made of pure beeswax. A very complicated subject in itself, suffice it to say that the C of E would not be what it is today without the beeswax candle. Much ink (wax?) has been spilled on this subject by a veritable multitude of divines, including the thirteen-volume masterpiece of Richard Spew of St. Paul's, published in 1675, and the later single-volume work of John Yardbird in 1856. Many have waxed eloquent on wax, if you will forgive my burst of levity, and -- with possibly the one exception of floor tile -- it has exercised the best minds of English Christendom. 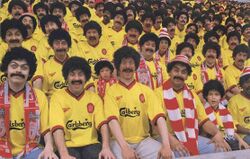 Members of Liverpudlius, a sect which exists within the Church of England.

The C of E is divided into three historical liturgical groupings: "Low", "Broad", and "High".

"Low" church is marked by such things as bad taste, minimal vestments, overhead projectors for displaying song lyrics, lengthy sermons, and lots of glad-handing and smiling by the clergy at the church doors.

"Broad" church simply refers to that sector of the church where women priests and bishops are most accepted. Belief in "God" is usually tolerated in Broad-church Anglicanism, so long as this belief doesn't override the more pressing dogmas of "Eco-Awareness", "Gay-Lesbian-Bisexual-Transgender-Tranvestite-Affirmation" and "Gender-Inclusivity".

"High" church is characterised by beeswax candles, enormous clouds of incense, complex "Catholick" liturgies, sodomy, and very costly neon vestments. So long as the homilies are pleasant, short, biblically illiterate, with frequent references to poets and novelists of the nineteenth century, and spoken with the proper air of elitism, they are acceptable to the average "Anglo-Catholic" congregation (mostly made up of males who like pretty things and elderly ladies).

The Church meets at frequent intervals at various venues worldwide to converse with their fellow practitioners, and to partake of the ceremonial alcoholic substance: Carlsberg. Every four years, thousands of members make the traditional pilgrimage to a rival nation. This, however, differs from other pilgrimages such as to Jerusalem by Christians in that the sole purpose of this trip is to wreck, terrorise and generally destroy the churches of rival faiths.

The consumption of pies during the ceremony is encouraged, as is the shouting of random insults towards members of opposing religions and in particular the referee. This is the central satan figure viewed by the Church as he who should be seen and never heard.