Monothelitism was a compromise type of Christianity, a both-sides-of-the-aisle, cross-party, middle-of-the-road, let's-all-get-along-and-hold-hands creed to bridge the divisions between rival churches in the 6th and 7th century; that is to say, long before anyone had ever sung Kumbayah. It addressed the thorniest problem of the time — the nature of the will of Jesus Christ — and cherry-picked the best bits of each side's theological position to come up with a solution that would end the interminable debates. It did not.

Where there's a will, there could be way or two[edit] 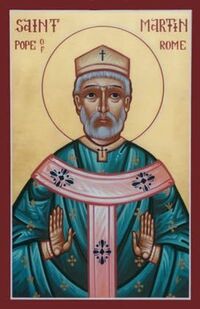 Pope Martin raises his hands in the typical 'what me? A heretic?' pose.

Monothelitism means 'one will' in Greek, a language that created a philosophical fog wherever it went. The essential question is this: Jesus drives by a McDonald's. Does he desire "peace on Earth, good will toward men"? Or a juicy Big Mac? Monothelitism's outline was that Jesus had both a human and divine nature (two), the theological position adopted by one group of Christians at the Council of Chalcedon in 451, in contrast to the others, who said Jesus had only one nature. The former became known as the 'Chalcedonian' position and its rival, the Monophysite counter-position. Both sides called themselves the true Christians, making everyone else the heretics. To make sure one side won the argument, a call to whoever was emperor in Rome or Constantinople would crack heads and enforce unity.

There had been one major attempt to re-unite the Christian church, at the Second Council of Constantinople in 553, where the debates had been organised and directed by emperor Justinian I. Anyone who got in his way was expelled or locked up, including Pope Vigilius, who assumed he was leader of the church, on the grounds of apostolic superiority as the legal heir of St. Peter. The council meeting didn't resolve anything relevant except condemning a number of previous church fathers for heresy and body odour. The Monophysites were not mollified.

Justinian's solution prevailed until around 622. Emperor Heraclius was in Armenia, trying to recapture lost territory, somewhere, anywhere. The Byzantine Empire had been greatly weakened by both a Slavic invasion of its European holdings and rampaging Persians in the Middle East.

Heraclius encountered a wild-eyed Monophysite heretic named Paul, from whom he sought advice regarding his other pressing need, a bump in the polls. The two had days of deep conversation, over some really fine weed. Heraclius increasingly sensed that his own theological understanding might be in error.

Heraclius went to Patriarch Sergius of Constantinople for a second opinion, but 'Pat' confirmed that the monk was closer to the truth than his scruffy appearance would suggest. He based this on a letter he said Patriarch Mennas sent Pope Vigilius, around 545. The letter discussed Jesus, theology, and trending movies. It appeared to support this newfangled Monothelite theology, as it said Jesus had two natures, one will and — for good measure — one energy (Mono-energy), a technology obviating battery backup and generators and spelling the doom of the Hybrid engine. Heraclius eagerly received a copy of the letter, and carbon-copied Rome and the Monophysites — confident that this would finally unite the realm.

Heraclius sealed the deal by issuing an 'Ecthesis of Heraclius.' Unfortunately, this was immediately controversial.

To boot, whilst the Christians were pulling each others beards out over this theological argument, the armies of Islam were sweeping over Syria, Palestine and finally Egypt. The Byzantine Empire's authority collapsed even before Emperor Heraclius himself did, in 641. Moreover, the lands he had hoped would rally to the imperial cause appeared quite happy to exist as second-class citizens (but keep their own religious leaders) in a new Caliphate and its black-clad ninja armies.

All was not despair, though: There was no longer any need to reconcile the Monophysites. They were now beyond the reach of Constantinople or Rome when it came to enforcing religious orthodoxy. 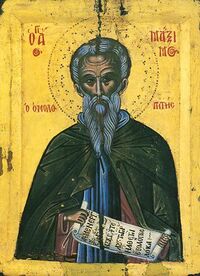 The Byzantine authorities clung to Monothelitism a little bit longer before abandoning it the late 640s. Emperor Constans II banned all discussions of 'this will business,' ditto even discussing whether there was a need to discuss. Pope Martin in Rome did him one better and declared Sergius a heretic. The Pope didn't blame Heraclius for the alleged theological errors, but Constans took it as an insult to his grandpappy (and himself) and had the Pope hauled out of Rome and brought back to his palace in the capital for an extended harangue, followed by a spell on the rack. Martin died as a result of his torture, but happily, got a posthumous sainthood for standing up to Constans.

The emperor then veered more towards the Monothelite position, as he once again entertained hopes of recovering former imperial territories. A holy man called Maximus the Confessor (who had been dragged over from Rome with Martin) tried to keep up the opposition with speeches and writing. Constans silenced him by having Max's tongue pulled out and his right hand cut off. Clearly, it didn't pay to mess with Constans.

Active support for the Monothelite position ended, along with Emperor Constans's life, in 668. Emperor Constantine IV sought a 'fresh start' and proposed yet another church council to make a final decision. This eventually became the Third Council of Constantinople in 680-681, which finally officially buried the Monothelite heresy. Catholic and Orthodox agreed. Jesus really had two of everything. The ladies were delighted.

Supporters of Monothelitism lingered on for a few more years. One of them, Philippicus Bardanes, briefly became Byzantine Emperor in 711, and revived the controversy by dismissing and exiling opponents. The emperor was deposed, two years in; with two eyes out for good measure.

Monothelitism was the last of the great theological tussles over Jesus's unique man/god status then had endured for four centuries without ever finding a satisfactory compromise wording. The councils kept adopting Heretics' Rules of Order, a 'my way or the highway' procedure under which those outvoted were not just wrong but demonic, and had to be chased out. Eventually, the East of Christendom gave up and set out in a new direction with no such knotty questions about Christ: They became Muslims.