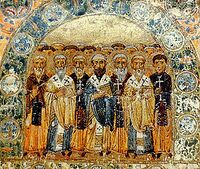 Theologians love to argue. In Christianity they did a lot of this in the 5th century. Attempts to reconcile opposite opinions would always end in failure, with the bonus that those who lost the discussion in a final vote were often deposed from the religious offices, exiled and on occasion, knifed in the dark by a killer monk and left to bleed out. God always backed a winner. This happened during and after the Council of Chalcedon of 451. It was another grand attempt to work out how Jesus managed to be both human and God and what this all meant if you wanted to avoid a fiery fate. 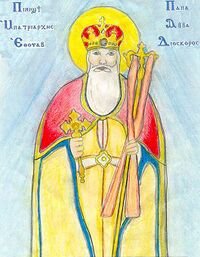 Dioscorus brought along his own bread sticks for the meeting.

The meeting at Chalcedon was called by newish Emperor Marcian and his wife, the Empress Pulcheria in an attempt to fix the result of the previous meeting of holy men in Ephesus. That council meeting at seen a mass brawl inside the church of St. Mary and the death of the Bishop Flavian of Constantinople, set upon by a band of thuggish monks under the direction of Patriarch Dioscorus of Alexandria. The argument there had been about Jesus had only one nature and always knew what he wanted on a takeaway menu. Their rivals were the 'Two Nature' Jesus who was a classic split personality, who managed to reconcile his opposite halves by crying a lot. The One Nature supporters saw this Jesus having a body double and therefore less than the full Trinity.

The results of the earlier council meeting had been accepted by Emperor Theodosius II. This had meant that the emperor had gone from one stage earlier supporting Nestorius and his theological viewpoint (a radical 'Two Nature' policy on Jesus's inner turmoils) to the One Nature views of Patriarch Dioscrous. Theodosius's sister Pulcheria had objected to the emperor's theological about turn and when her brother died in 450, it was her voice that came out on top. There was going to be a theological re-match between the One Nature and the Two Nature groups.

Pope Leo I in Rome considered coming along to the gathering in Chalcedon to represent the Latin speaking contingent in the Western half of the Roman Empire and his political master Emperor Valentinian III. However, the latter was in a spot of bother with his sister Justa Grata Honoria who wanted to run off with Attila the Hun and produce a lot of little Hunnies. Attila had then invaded Italy to find his new girlfriend. Pope Leo decided he had to stay home in Rome and save his city from the beasts from the East. Leo did re-send his earlier book length letter denouncing everything that had happened in Ephesus in 449 and why Jesus needed to have a human emotional side as otherwise he would have come across as a Vulcan. Leo signed his letter as 'Pope Leo Speaking with the Guidance of St. Peter'.

Eventually 520 bishops attended the council that started in November 449. No bishop came from the West except a small team representing the Pope. They were also there to make sure they had a full copy of what was ever agreed and show to Leo. Patriarch Dioscurus did turn up with his supporters, convinced he could persuade Marcian and Pulcheria to uphold the decision of 449. It was a misplaced trust.

What Was on the Table[edit] 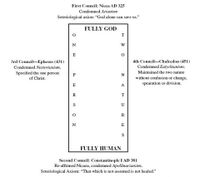 Seating arrangements. Bishops are forced to decide where they should sit.

Dioscurus and his allies said the previous council had been fine. Emperor Theodosius II had approved the results, stamped and sealed and submitted to Jesus for his approval. Voices were heard and identified as Jesus. It had been agreed. Jesus's God Sized Ego squeezed everything else out including what ever was 'manly' about him. So what was this meeting going to be about?

Emperor Marcian called the meeting to order. An extra throne was then brought in with Empress Pulcheria sitting on it. The sight of a woman caused loud murmurs from some of the beardier bishops. The Egyptians softly murmured 'throw her out, throw her out' until Pulcheria indicated to the imperial bodyguard present to bang their spears on the floor. Then Bishop Anatolius of Constantinople read out the charge sheet against Dioscorus and also Eutyches, considered to be the main pusher of the One Nature Jesus gang. The latter had already been stripped of his holy vestments at the earlier 'Synod Quickie' in Constantinople but managed to avoid having a repeat humiliation in Chalcedon by fleeing to a remove cave without a recognised postal address.

These were the charges read out against Dioscurus in particlar:

Symbolically, all the decisions of the 449 Ephesus meeting here burnt in a brazier set up in the middle of the church and all appointments made declared to be invalid. Dioscurus started to speak but was then gagged with his own beard and told to sit down. He was stripped of his office of Patriarch of Alexandria and exiled to a remote Anatolian prison. The Egyptian contingent then left the meeting and stood outside the church asking for Jesus to pop down from heaven and support them against their opponents. Jesus was out on another missions. Inside the church, other delegations from Antioch and Jerusalem - seeing which the way the wind was blowing - agreed to the arrest and imprisonment of Dioscurus and then waited to see what would be the consequences.

With the 'One Nature' party no longer in the church, the 'Two Nature' bishops came to a quickish conclusion after three weeks of heavy, all night theology. This was to be called the Chalcedonian Creed as 'updated' from the Nicene one:

Emperor Marcian and Empress Pulcheria stamped their approval on the documents and everyone went for a nice post-lunch cruise down the Bosphorus.

A few extra wheeler-deals were done. Pope Leo I claimed the council meeting recognised his supreme authority in all Latin speaking provinces of Rome and that he had the right to 'preside' over a council if he ever came out West. The Bishop of Constantinople became Patriarch Anatolius with a nice set of vestments to wear. Eutyches died alone in his cave. Former Patriarch Dioscurus passed away in 454, still a prisoner and considered to be a 'living martyr' by the Egyptian Christians and others who supported the 'One Nature Jesus'

Egypt goes Coptic. They say the council was a stitch-up and refused to recognise its rulings[1]. Dioscurus was only following the teachings of St. Cyril about how Jesus juggled his personalities and it was only Eutyches who was the heretic with his extreme view about Jesus. Dioscurus dies in exile and becomes a 'saint. A pro-Chalcedon patriarch replaces him in Alexandria but other Copts recognise Timothy 'the Weasel' as the true successor of Dioscorus. A few years later Patriarch Anatolius of Constantinople was knifed to death outside St. Sophia. Back in Rome Pope Leo awaited a full translation of the proceedings of Chalcedon. He thought his letter swayed the result but it's likely his translators puffed up the pope's influence. Leo would have celebrated a bit more but he had an urgent meeting with a horrible Hun outside the gates of Rome to deal with first.

A complete set of records were kept in a summary, along with some very rude drawings of Dioscorus.