Nestorians spread about a bit. They got to China.

Nestorianism is a Christian heresy that the Virgin Mary was only responsible for baby Jesus's human-like qualities, such as temper tantrums and throwing his toys out of the pram. Jesus's more solid attributes, such as putting up shelves and replacing broken axles in chariots, came from his divine father, God. Theologically speaking, this meant Jesus grew into his role of saviour after God decided Mary's boy was just the right type of prophet. Mary was just an illiterate peasant girl of 13 in Palestine who was incapable of birthing a divine being older than herself. Where Joseph fitted into this arrangement was anyone's guess. 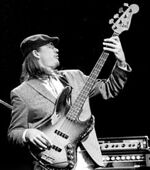 Nestorius went on to play for Weather Report.

The Nestorian heresy[1] is named after the theologian Nestorius (386–450), who learnt his Christian trade in the Syrian city of Antioch. Nestorius seems to have been a woman-hater and especially disliked the role of the Virgin Mary in prevailing dogma. As so many churchmen would do in the future, he wondered why God couldn't have just winked Jesus into existence without the 'messy bits' involving a woman's body and a placenta. As a compromise, Nestorius asked: Why not just attribute to Mary the mortal Jesus as he appeared to his friends and disciples, whilst God would have the immortal bit? A sort of beatnik Hercules. So did this mean there were two distinct Jesuses, physically in the same body but psychopathically divided?

Nestorius's noodlings would have died the death, if he hadn't become Bishop of Constantinople in 428. The 'New Rome' was the capital of the East Roman Empire and a bishop there had direct access to the emperor's ear. Nestorius could speak and preach to bamboozle especially easily, as Emperor Theodosius II was a willing pupil. With imperial backing, Nestorius publicised his revised view on the true nature of Jesus as a 'trial balloon,' shrewdly putting a front-man named Anastasius before a crowd of theologians. The immediate reaction was a collective shrug, as it was a hot day and everyone was too sleepy to pay close enough attention to the smelly old duffer in a complex blanket-weave.

However, a few monks made copious notes (as monks often do) and sent them to St. Cyril, the Patriarch of Alexandria for his views. Cyril ran the church (and the city) as a combined mix of bishop and gangster. He called what Nestorius had said about the Virgin Mary 'blatant heresy' and promised to come to the capital and horse-whip Nestorius in person. If the emperor evaded that confrontation, Cyril would demand a new church council to condemn the silver-tongued heretic.

If you couldn't win your argument on theology in debate, try a fist to the face instead.

The escalating feud between Cyril and Nestorius (and their respective supporters) had to be resolved. Emperor Theodosius did convene the council, to be held at Ephesus in the Summer of 431. He emulated his imperial forebear, Constantine the Great, and presided over the meeting. The agenda was to decide whether Mary would be referred to as "Birth Giver of Christ" or as "Birth Giver of God"; also, who would have their tongues cut out.

However, when Cyril turned up and made himself the presiding judge of Nestorius and his views, Theodosius slunk off and Cyril prevailed. Mary was declared Mother of God, though being way too long-dead to care; Nestorius lost his job and then his freedom when he refused to apologise. His teachings were officially declared anesthetic, one of the Twelve Anesthetics of Cyril (Schlitz Malt Liquor being the only one that survives to the present day). Later on, Nestorius was carted off to a remote monastery in Egypt. He managed to smuggle out one book in his defence,[2] but then had his writing paper removed to keep him from filing more appeals.

Eventually, Nestorius renounced Nestorianism, exclaiming, "Jesus God! All right, already!" His remaining research in that remote monastery was to study whether a tree falling in the forest makes a sound if no one hears it.

Nestorianism lived on elsewhere in the Roman Empire, especially in the Latin-speaking (and still Latin-dancing) Western half, though with minimum impact.[3] Popes Celestine and his successor Sixtus III barely understood the dispute, except it seemed to be a Greek-language insult to the status of the Virgin Mary, while they were busy grappling with original sin.

As in any struggle over Christian Truth, the losing side was never granted any tolerance. You either grovelled for forgiveness or moved elsewhere, and the Nestorians did not grovel. Luckily for them, another power in the Middle East welcomed them: the Persian Empire. By the end of the 5th century, those who still supported Nestorius' theology had left the orbit of Rome.

Outside the Papacy, Nestorianism remained vigorous, its message spreading out further and reaching India and China within a couple of centuries. Then it was overtaken by Islam, then hammered by the Mongols and Timur the Lame. It never died out, hanging on in niche Middle Eastern communities until the 20th century as a sort of Arabian Amish.

Nestorianism's only lasting influence on Catholic and Orthodox Christianity was their inflated regard for Jesus's mum, bordering on goddess-worship. In the 16th century, this produced a backlash among radical preachers that led to the Reformation and a realigned status of Mary. Woman!! Know thy place!!!