Timur:It got a lot 'camper' after this.

Timur the Lame (born 1330s? - died 1405) was the last of the 'old style' conquerors who wanted to engulf the planet in blood for no other reason but gain notoriety and a lengthy encyclopedic entry. He left pyramids of severed heads from Ankara to Delhi and all points north, south, west and east. A muslim by birth, he treated everyone equally harshly whatever their religion but was once seen a possible saviour of christian Europe.

In the West, his Timur's name was translated into 'Tamburlaine' and became the subject of a two plays by Christopher Marlowe. Later still people thought there was a relation with Tambourines to add to the confusion and so would shake them during performances of the play. In this production, Tamburlaine conquers not only Asia but also Africa and dies (like Alexander the Great) in Babylon. In other words Marlowe's Tamburlaine is as about as close to real history as King Arthur, if sometimes it does contain the truth. 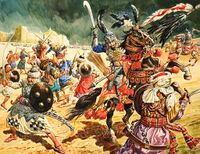 So everyone is familiar with Attila the Hun, Genghis Khan and perhaps the most terrible of all, Justin Bieber but where does Timur fit in? Why isn't his name a byword for destruction and all round generally very murderous behavior. It is like Timur has fallen right through the cracks of history. In some ways, Timur has less excuse than either the pagan pair of Attila and Genghis. He had grown up as a muslim and often proclaimed his adherence to the faith but in practise, he falls closer to the example of Osama bin Laden and Islamic State.

So let's get a couple of facts. Where did he get 'the Lame' from and who was bold enough to apply it to him? And how did it get conflated by transmission to Europe as 'Tamurlaine/Tamburlaine/Justin Timberlake'?? The other odd thing in age when the average age to die was about 30, Timur's career didn't get going it seems until he was at least 40 or perhaps closer to 50. After that, he was an old butcher in a great deal of hurry. But to go back to the 'lame' bit. Seems Timur fell off his little pony and broke a leg. Since the nearest hospital was about a month away, Timur set his own leg straight but had drunk too much yak's milk and so it came out more like 'Bend it Like Beckham'.

Our early portraits of Timur showed that he had a deep scowl and eyes that bore holes through those brave enough to meet them. It was usually your first and last meeting as one his guards would drag you outside. The lucky ones just lost their heads. Timur had a whole catalogue of torture techniques for those who had really annoyed him.

I am Khan and I suck?[edit]

A film made by an enemy of Timur.

Timur's slow limp to the top involved a lot of making sure you made the right friends. He claimed his father Taraghay (yeah,yeah - go ahead and say "Tara the Ghay") was a descendant of the loins of Genghis and that he had a dream that he would re-unite the Mongol Empire under his bridle and walking stick. His mother Tekina Mohbegin or 'Moby' liked to shave all her hair off and sing about life with the nomads out in the far East. They both lived in Transoxiana which sounds like an obscure sexual self identification but was in that grassy desert between the Caspian Sea and the Aral Sea.

The old Mongol Empires were (despite their common family origins) routinely hated each other with deep passion. That allowed Timur to 'come through the middle'. In the 1360s he conquered the central Asian Empire of the Chagatai and then in the 1370s and 1380s headed into Russia to take on the Golden Horde. These were Mongols who liked to live in the life of Bling in brightly coloured tents. It was in this war that Timur started to deliver his signature 'pyramid of skulls' pacification methods. To show that he wasn't a ignorant religious bigot, Timur ordered geometric patterns in his grisly display of retribution to recorded by travelling artists and sent out far and wide.

Heads you lose, lose your heads[edit]

Timur's head chopping reputation was certainly good news for headsmen in Asia. It seemed to be the answer for everything when Timur wanted something done. He seemed fascinated with the gruesome process, just couldn't get enough of it. Inflicting pain he would say was necessary to re-unite the Great Silk Road from Europe to China. A cut in the takings, camel transportation tax, Nomadic Business Insurance - in fact plenty of ways to 'skim off the top' and if you were caught cheating, then you would be 'skimmed' off the top - everything above the neck.

It was an effective policy and by about 1370 Timur had conquered the lands known as 'the stans': Afghanistan, Kazakhstan, Whoisbeckystan? and the particular troublesome, EminemStan, the black beanie people. Since he was also against cities as such, Timur had them all destroyed except one, Samarkand which was to become the 'capital'. 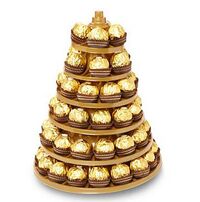 Timur liked to have the heads of his enemies stacked like this.

Timur's next stop in grand bad assery was India. On the way he stopped off in Persia to annex that land and then headed East. Delhi was the home of the Sultans of Swing and hot curries. Their rulers were also muslims too but as noticed before, Timur was no less happy to kill his fellow religionists as those of other faiths or not. After some resistance. Timur steamrollered his way to the Indian capital where he was to conduct a mass head chopping frenzy.

At least 90,000 were said to have been killed and the city left a ruin for the next 50 years. Timur did bring back some trinkets: War elephants, gold and silver to decorate his city ten times over. It was a finest Indian take-away since Alexander the Great.

With India finished, Timur now went into 'full' conquest mode. He looked west and the ancient Muslim lands of Iraq, Syria and Egypt. Since the Crusades, the various states there had carried on their wars against each other. Timur arrived in Baghdad in 1401 and gave that city the same treatment it once received back in 1258 under the Mongols.

Next pillage and destruction point was Damascus and then Timur pointed his tuskers towards the Nile. So far, no one had really had challenged him or had been capable of doing much damage but there was another empire that was keen to stop Timur. This was the Ottoman Turks who had already smashed their way into the Balkans. It was time for a mighty big rumble.

Timur drops by to gloat at his rival.

There was another Muslim conqueror to cast a shadow on Timur's blazing sun: Sultan Bayazid. Known as 'thunderpants', Bayazid had out stunk the Christian states and their woeful 1396 crusade against him at Nicopolis. He was hoping to finally take Constantinople from the dying Byzantine Empire when Timur turned up on his door step demanding submission or death.

Bayazid turned his armies around and looked for Timur. The latter left all his foot sloggers (and elephants) behind and invaded with cavalry only. Also a few chests of gold and silver to bribe Ottoman soldiers to desert helped. The armies met near Ankara in 1402. Both sides had huge armies by European standards - at least 400,000 or maybe more - and set about each in a long metal bashing epic. Bayazid was advised to flee but instead refused to believe he could be beaten till Timur placed a chain around his neck and led him to captivity.

News of Bayazid's capture sent church bells ringing throughout Christendom. The Ottoman turks were apparently crushed by a new saviour from the East. Religious leaders urged the prompt sending of missionaries to the mysterious 'Tamurlaine' and see if he wanted an alliance against the Turks. That Timur was a muslim seems to have been missed off the fact sheet. Anyway, by the time the Christians reached where Timur was reported to be, he had already moved East. The conqueror content now that he had no other Muslim prince as a challenger.

For Christians the fascination about Timur lay with how he managed to beat the Turks when all Christian armies had either failed or had suffered a full grovel-in-the-dirt defeat. Timur's non-discriminatory approach to mass destruction seemed to please them too. If only Timur became a Christian, he could happily put all that blood behind him. 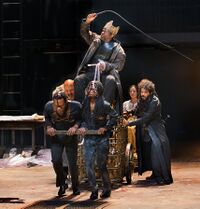 Take me to China slaves!

Timur now had an empire that stretched from the Mediterranean to Delhi, an empire in size to the great Alexander. He could has as easily marched into Europe over the corpse of the Turkish empire but instead Timur wanted to get his full world tyrant crown. He needed to conquer China.

Leaving with the caged Bayazid as entertainment, Timur slowly marched his army towards the celestial kingdom. It was slow progress and to Timur's disappointment, his chained guest Bayazid died in custody. Legend has it Bayazid was kept a collection of other rulers and hostages Timur had collected on his travels and would force them to carry him around on a large chair as his personal servants in Samarkand. This is the story Christopher Marlowe uses for his play. In reality Bayazid never got that far, dying in captivity. Enemies of Timur (i.e. virtually everyone outside his immediate family circle) said Bayazid's body had been skinned after death and that had been used to cover a scarecrow but this is a confusion with the fate of the Roman Emperor Valerian.

Death in Comes to Timur[edit] 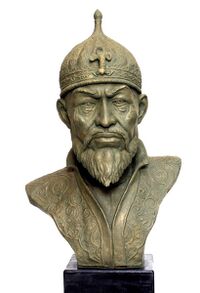 Bags were packed, head chopping axes sharpened and foreign currency cheques written out - Timur was ready to go to war with China. Barely had the army started out in 1405. The ruling Ming dynasty in China had refused to 'resign' and let Timur take over.

A long series of insulting letters had been exchanged between the two courts. Bad luck of the messengers or embassies sent from either side. Killing the messenger was a standard fate for those bringer of unwelcome news. However in this instance, the messages were sufficiently insulting to galvanise Timur to embark on a war in the middle of winter.

Timur died in early 1405 from a head cold (irony!) and his body returned to Samarkand for burial. A glorious tomb was built and Timur led to rest inside. He's still there and is now the national hero of Uzbekistan. In the same way as Genghis Khan is for Mongolia, Timur the Lame's fame can be honoured by tourists buying teeshirts and skull shaped mugs to celebrate this up-to-his-armpits-in-blood 'man of action'.

Estimations for the number of people Timur killed or had executed under his order has been estimated as 5% of the world's population in 1400. Trouble is, no one knows what that total is. Genghis Khan - and the other Mongols are said to have dispatched 10% to any early death. This compares to the 40%-50% killed by plague or the colonisation of the Americas by Europeans (about 90% died). So in effect Columbus outranks Timur on the killing stakes.