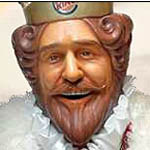 King Arthur is the famous British king of Arthurian Legend, well-known as both a Protector of the British Isles from people not usually considered to be Britons and the man responsible for the foundation of the aforementioned Arthurian Legend that was spoken of before as well as the inventor of the circle.

Arthur was born as Arthur Penpusher, son of King Uther 'Udders' Pentupdragon and Ingrained. Udders had sneaked into Ingrained's furry bed whilst her husband Gormless was out bashing the Saxons and getting himself killed. Ingrained's daughter Migraine watched it all and saw through Udder's diguise when his false nose and beard fell off. Migraine latter seduced her baby brother and became the mother of their son Mordred or 'Morbid' as he liked pulling the wings off birds as a toddler.

It was a tight family.

Legends about Arthur say he did a great many strange things, things involving swords and sorcery, wizards and warriors, and dungeons and dragons. As opposed to the current political malaise faced by the British Isles, wherein the most exciting political developments revolve around the nuances of the Brexit, King Arthur's political developments revolved exclusively around sex and violence, and thus make for a rollicking good read. Also having fun with his Knights at The Round Dinner Table on their days off looking for a Holy Grail.

A Kinge is Crowned, and There Was Much Rejoicing[edit]

This is what King Arthur would look like if he was made out of metal, in this case bronze. Some cultures in the world make these sculptures, called "statues" so that they may one day fashion an unstoppable army made out of metal and stone.

In any case, Arthur was born the sole male heir to Uther Pendragon and Ingrained thanks to the king's wizard wingman Merkin turning him into her husband; allowing for a night of surprise shape shifting sex. Uther went on to slay many more of his enemies until falling ill and riding into combat propped atop his horse. Only when he started to smell really bad was Uther removed from his mount and buried.

Arthur was hidden from the eyes of the many warlords wishing to fill the vacant throne. He was raised as a squalid stable boy and squire to his adopted brother Sir Kay. Arthur was oblivious to his royal inheritance but did wonder why a creepy old man known as Randy Merkin, esq kept seeing him. Merkin taught Arthur how to become a fish (among other oddities enabled by magic potions and learning to read). Then, there was the matter of a sword stuck in a pile of dung, though it was left there on account of the awful smell. A different sword, one stuck in better-smelling stone, was then selected by pranksters as the One Sword to Unite Them All, though it is unclear who Them were. History, as it is, points to the Britons, though it could also be the Saxons, who were taking longer and longer holidays in Britain around this time.

Once he had secured the sword, the boy king proceeded to Unite Them All, and conversely, Them were all too happy to crown him Kinge of Angle-land. So, at the tender age of 13 or so, Arthur found himself King of all he surveyed, and even things beyond his field of vision.

Patsy, what's the airspeed velocity of an unladen swallow?

Every King needs his knights, or so it seems, and Arthur was no different. Was there some kind of knight sign-up that he orchestrated to attract the best knights in the land? Or, did he simply appoint his relatives and lackeys to choice positions?

Regardless, after a time, Arthur assembled what was almost certainly a bunch of men with armor and swords. Due to the fact that he was an unimaginative git, the round table that they sat around, drank excessively and passed gas upon would bear their name.

Some of these knights had names - famous names - like Sir Letchalot, Sir Gawain and Sir Didymus. And as sure as no one ever actually practiced the code of chivalry, they rode around the land doing various things, possibly for the benefit of ordinary citizens. For Arthur was a good king, not one of those bad ones, such as that Herod character in the Bible, or the nefarious kings such as King Friday, Larry King, and Nat King Cole. No, King Arthur was all about helping old women cross the street, holding the door open for you, and requiring your services annually to serve in his army after the harvest season concluded.

Drinking. Womanizing. Some woman named Guinevere. All these things, and perhaps the unchecked insanity of Merlin led to the ultimate downfall of Arthur and Camelot in general. When all was said and done, Arthur looked back on his reign and said thusly, "Well, it was a good run. I fucked a lot of hoes, capped a lot of mark-ass fools, and walked the pimp walk as it should be walked. Hear me well, my homies, and bury me with all the Cristal and Hennessey in the Kingdom."

Arthur was mortally wounded by Morbid in a dispute about a building a wall around Britain to keep out the Saxons. Arthur's grouchy sister Migraine proclaimed Morbid the new King of Britain but they were in turn both killed by a band of Saxons who hated their 'Celtic rubbish music'.

The dying Arthur retreated to the Avalon sword cuts rehab unit run by Roxy Music. He lived long enough to listen to all the songs including Tara but then died. He bequeathed all his remaining worldy goods to his secret son Arnold and Mexican housemaid Frida Kahlo.