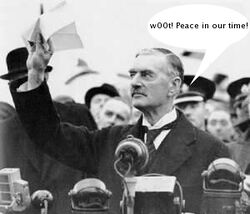 His most famous quote "Cheese in Our Time."

For the religious among us who choose to believe lies, the self-proclaimed experts at Wikipedia have an article about Neville Chamberlain.

Neville Chamberlain was Prime Minister of Great Britain from 1937 to 1940 and author of the world's greatest joke. He was made famous for bringing back to London a sheet of lavatory paper given to him by Adolf Hitler . It said Thank You Nev written in shit. He is also well-known for killing Voldemort's pet snake.

Neville Chamberlain was never destined for political office as he was a secret shit bottler. His father Smokin' Joe Chamberlain and brother Austen 'Seven' Chamberlain had both enjoyed long careers as politicians but neither had become prime minister. Neville, by contrast, had stayed away from the public eye, disguising his smelly hobby by trying to appear normal like fishing in his knickerbockers. However, he took a growing interest in a career in politics and had followed his family into various offices of state. Lacking any charisma or charm, Chamberlain became British Prime Minister in 1937. His policies were (1): Appeasement and (2): Abasement.

Chamberlain's scatological interests led him to believe that he could share shit with the German leader Adolf Hitler. If Chamberlain was a secret hoarder of his own excrement, Hitler had gone beyond the embarrassment level and would honour visiting dignitaries with a fresh sample of his appreciation, bottled and stamped with a Nazi eagle for authentication. Both the former British Prime Minister David Lloyd George and the Prince of Wales had received their 'personal gifts' with extreme puzzlement when they had visited Hitler at his home in Berchtesgaden but had chosen not to make this public. But for Chamberlain this was U-Bend of an opportunity, and helped explain why Hitler had started the Brown Shirts in the first place. In other words, National Socialism was the German political manifestation of a crap-orientated ideology. 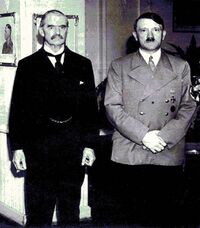 It took a crisis over Czechoslovakia in 1938 that finally allowed Chamberlain and Hitler to meet in person. Becoming aware that neither the French Prime Minister Edouard Daladier or il Duce Benito Mussolini shared his interests, Chamberlain agreed to meet Hitler inside the Fuhrer's own lavishly decorated toilet. Allowing only space for an interpretater, the leaders of Great Britain and Germany discussed the best diet for quality stools and if standing or sitting was the correct position to adopt when going for a big dump. Chamberlain was a 'sitter' and Hitler a 'squatter' (as revealed in documents produced during the Nuremberg Trials of Nazi leaders after the war). Hitler said he 'felt satisfied' and presented Chamberlain with a used tissue before it could be flushed. This broke the ice at the meeting, the side issue of breaking up Czechoslovakia and handing it over to stooges and greedy neigbours went smoothly as a result. This was to cause a 'big stink' later on, Chamberlain and Hitler both believed they had achieved a great deal.

Returning to Downing Street, Chamberlain was cheered by crowds shouting Piss In Our Time and retired to a back room to do a 'smell test' on Hitler's letter. Satisfied that it was the genuine article , the note was kept in a bottle and stayed on a dusty shelf for the next sixty years. It was later incorporated into the Labour Party's manifesto for 2001.

It didn't take long for Hitler to disillusion Chamberlain, though he offered other incremental/excremental letters asking for British favours for the next twelve months. These demands came as a great blow to Chamberlain as he felt Hitler had abused his trust with such a delicate matter. Like a lover spurned, Chamberlain offered a military alliance with Poland in the hope Hitler would really shit his pants in his surprise. But Chamberlain was out of his league, 'Der Schiesser' wanted to cover the world in his own shit and was happy to tell everyone of his ambitions.

In September 1939 Chamberlain declared war against Germany but appears to have secretly hoped his ex-friend would do pull the chain and come to his senses. It didn't happen and Chamberlain's career was the first to take a one way ticket to the crapper. In May 1940 Chamberlain resigned and locked himself away in a secret basement at No.10 Downing Street. That was the last anyone saw of Chamberlain.

One of the best jokes of all time was as the picture shows the "peace treaty" between Britain and Germany. This was the last greatly funny joke before the war broke out.

Neville Chamberlain is not to be confused with either Winston Chamberlain, a saucy postcard seller in Brighton or Neville Churchill a centre forward for Arsenal in the 1930s.