Scatology is a newly-flourishing field of scientific study that has come to prominence only in the last twenty years. With the emergence of more foul-mouthed and smell-liking people in the last decade, however, it is a field that has exploded in poopularity (as the French say it), especially with new college students. As of 2006, it has become the third most-studied college subject behind Anatomy and Fratology, and programs in colleges across the country received in excess of $69 million in study funds in 2005 alone.

Scat 2: The proud legacy of a productive individual. 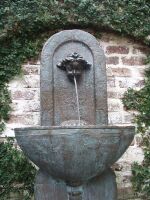 The 'Stone Throne' is one of the holiest of Scatology sites. It sits in an alley somewhere in Chicago.

Fecal matter has, of course, been extant since animals first roamed the earth hundreds of years ago. From the microscopic remnants left by protozoa to the house-sized feces left by dinosaurs during the Jurassic era, dumps have been important events for the survival of creatures, keeping them regular and giving them something at which to laugh when an unsuspecting creature happens to not pay attention to where they are going and step right into a pile of it.

Over time, as human beings evolved, scat, its uses, and the discussion of it became more refined. For example, the Ancient Greeks, realizing the full potential of the potent aroma coming from scat, attempted to make it a great weapon during their wars with Sparta. Unfortunately, without any sort of catapults or other devices, the only way to use the scat was with their bare hands. While the scat would work when it hit the Spartan armies (causing them to go into spasms from the stench), the far-and-few-between hits ultimately led to the Greeks losing to the Spartans on a regular basis. Warriors in Ancient Rome were, however, able to use the catapults as a more logical way of deploying the dung, though they were more concerned with discussing its "scatness," as is evident in this excerpt from Cicero's work The Scatpublic:

“...but is it not the purpose of the scat to be more than just that which it is? With such powerful potency and ability to elevate mankind's sensation of odor, why, then, would it not make sense take in all the aura that the item has surrounding it? Surely, anything that one were to believe stinks to high heaven must certainly open a pathway to be closer to the gods.”

While the scat, like many other things, reverted back to no more than scat during the Dark Ages (350-1450), it became used much more during the Renaissance, especially with the formations of indoor plumbing allowing for it to be found and studied much more easily. This continued through the Baroque, Classical, and Romantic periods. However, by the beginning of the twentieth century, there still had been no formalized study. People throughout the century did attempt to formalize the study, but there was always some sort of distractor. For example: 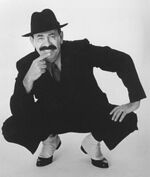 John "Scatman" Jack, founder of Scatology, smelling a recent sample on his finger.

In the late 1970s, a young man by the name of John "Scatman" Jack (1956-1999), who was a radiology student at Princeton, was using the bathroom one day in the science building. Unbeknownst to him, however, he had been exposed to a bit of radioactive material, so when he finished, he looked into the toilet and saw that the scat had turned a neon color and was slightly glowing. Interested, he decided to study it, and from this, he began his study into the field of scat.

His original attempts to study the world of scat led to some resistance from his classmates at the university. Most of the resistance came from the smell that Jack had produced from being around the substance so much (which became even more apparent when engaging in physical activity such as basketball and football; as Jack himself put it, "sweat and scat don't mix that well.") However, by the time that he had graduated the university and joined as a staff member the following school year, people were beginning to warm up to his ideas, especially after his study of the fecal matter produced from the Great Turkey-Dinner Fiasco of 1981 led to the discovery of its cause (and the banning of turkey stuffing for about five years). The university, because of this and its sullied reputation as the only school in the Ivy League with good sports teams, decided to start funding Jack's studies to develop a course of study.

By 1986, Jack's studies had led not only to the further understanding of scat, it had also led to the development of different categories (see below), a research institute at his alma mater of Princeton, and had convinced members of Congress (many of whom are scat fans themselves) to pour in millions of dollars annually into the study of scat. With this additional backing and confidence, "Scatman" was finally able (on April 18, 1986) to establish the nation's first scatology course at Princeton. As defined by Jack:

“Scatology is the study of all that is scat. It deals with not only the practical purposes of scat, but also with the different varieties (which, in reality, are much like the different varieties of wines), the smells, the textures, and the history of scat through the ages. Yes, we, at long last, have finally come to know shit about shit!”

Within a matter of years, scatology laboratories and class quickly began to spring up all across the nation. In 1990, Congress passed a budget that, for the first time ever, contributed an annual allowance to the study of scatology (roughly $10 million at the beginning, though that, as stated earlier, has grown substantially). In 1992, to help better manage the rise in the field's popularity, the first national headquarters for the research of scat- the Scat Higher Institute of Technology (S.H.I.T.)- was founded and stationed in Pittsburgh, Pennsylvania. Originally a two-story brick building, the place has grown into a sprawling, stinking complex located just on the outside of the city. He recored the song "Scatman" in 1995, and in 1999 he died of diarrhea after giving a lecture about toilets.

Different Fields of Study in Scatology[edit]

Craponomics is the study of the economic impact that scat can have on a nation, from the time of creation of scat to the point at which it can be sold in different marketplaces. This field of study has been especially looked into by national economic advisors as a possible way to help alleviate the national trade deficit.

Cacology is the natural effect that scat has, ranging from its use as a fertilizer to the powerful stench that can warn other animals to "stay away; this is my territory."

Shilarity is more along the lines of the entertainment value of scat. It deals mainly with young comics who are seeking to include scat-related jokes into their shows, such as, "What do you call shit that stinks to high heaven more than any other? George W. Bush!" Studiers of this art include Jack Black, Margaret Cho, and Carrot Top.

Scatropology deals with the study of the history of scat.

The study of scat in music deals with the involvement of "scat singing." Beginning with somebody doing scat on records to represent the noises that one can make when on the toilet, it was made a pure artform during the jazz era, with people saying "Skoo-be-dee-boop-ba" and other phrases in the music. It goes up to today to a fast-paced form perfected in the public speaking ability of Ozzie Guillen.

Those who study scatology have identify three distinct types of scat that, after learning, can become easily identifiable to the naked eye:

Dung (sometimes called "manure") is often mostly found on farms and is usually the product of bred and eaten animals such as horses and cows. While somewhat strong, the stench often has more of a pleasable aroma than the other types of scat. This type is also used most when it comes to fertilizer and to ward off cattle rustlers (usually by placing it in pastures and having the theieves step into it and become disgusted).

Monkeys are primary sources of crap.

This refers to the type of refuse that human beings and monkeys use. While it has no true redeeming value, its aroma is often an "acquired smell," loved by those who create it and hated by everybody else. While humans haven't used it much as weapons in modern times, monkeys have resorted to flinging it whenever they feel their personal space has been compromised, scaring off potential predators. This category is also used to describe all other non-essential or mixed-response scat (bears, deer, etc.).

This is a special category in which scat from dogs and cats falls into. Not only does it not have any redeeming value to it, but its aroma is liked by no living creature (even the dog/cat that created it). However, its powerful stench has persuaded chemical scientists in countries such as Iran and North Korea to study it as a potential biochemical weapon.