Deer are a group of sexual beasts, often rabid and universally unimaginably violent woodland creatures. Interestingly enough they often feed off of their own kind. They consider being hit by a car to be a sacred act of sacrifice. This sacrifice allows around three smaller deer to not need to feast again for a week. This is also their preferred method of reproduction, as once they have finished feasting, they are able to assemble from one to three new, smaller deer from the bones and assorted leftovers. This has caused them to flourish in wooded areas.

This horrible experiment by the CIA to stop speeding in heavily wooded areas went terribly wrong. A malfunction causes the deer to just stand there staring at your headlights or even jumping right out in front of you instead of fleeing and just scaring you. Interestingly enough, the best advice in a deer infested area is to put the pedal to the metal and get the hell out of there! Deer are also apart of the cows' evil plan to kill humans. Please see the Cows article to learn more.

Deer hate reptiles from the planet Zogu and want them all to die in fiery explosions, similar to kamikaze units in the Second World War. Deer however do not have access to explosives as they are too expensive. The deerish solution to this problem is to simply jump out in front of vehicles and kill as many Zogian reptiles as they can in that manner. At this time nothing can kill more reptiles than deer, except for squirrels. Deer are almost as fast at breeding as squirrels and bunnies and, in some folklore been portrayed as spontaneously combusting into a new parasitic unit. The only way to keep deer populations in check is to support organizations like P.E.T.A. (People Eating Tasty Animals) and to go out hunting as much as you can. Deer populations are going up, but we can make them go down if we hang more on the wall!

Deer can be intelligent, as they have figured out how to dominate worlds and use explosives to demolish tree stands. On their home planet, Bob, they have constructed a laboratory for figuring out new technology and faster ways to eat plants in front yards. On some occasions, they set up traps to kill lawyers who stupidly follow them onto a freeway or railroad tracks. in 1996, a nuclear weapons facility was found somewhere near Yosemite, and machinery for mass destruction that had been modified from the war. Once believed as a myth, deer were seen in many old documentaries of Stalin and Communist activities. Main targets for these weapons included Cabela's, Sportsman's Whorehouse, and several trailer parks in the south.

Deer have a very long history which I am far too lazy to talk about so I will tell you of these Mule Deer instead. Mule Deer have long sought the notoriety that Whitetails enjoy. However since that first Mule Deer was caught in bed with a Mule eons ago they have been typecast as stupid. Even though their huge ears make them look somewhat like giant mutant PUPPIES! In reality, it was later determined that their farsightedness was responsible for their doing it with Mules, Humans (both male as well as female), and Extraterrestrials of various kinds, because of the simple fact that they like big booty. Alas, it was too late to turn the tide of profiling and they have remained outcasts from Planet Bob ever since.

Origin; When homoerectus was thinking about inventing his wheel, he needed an Eyed-Deer, so he went out hunting for it. Eventually he came across a particularly handsome Eyed-Deer in a clearing in a wood. In his haste to capture the Eyed-Deer, he shot the Deer straight in the eye with an arrow. He pulled the arrow from the Deer's head, removing his eye. The Deer ran off and the man returned to his cave. With inspiration from the now One-Eyed-Deer, he invented 'The Wheel'.

In ancient times, it was believed that catching the One-Eyed-Deer brought great prosperity and luck to those who captured it. Once caught, they would lick the Deer's antlers. In a bid to encourage creative thinking, they would wear Deer antlers on their heads like thinking caps. Although there is no evidence that this worked, this tradition has been used ever since. When the Romans designed their roads with no corners, they had forgotten their antlers and really weren't thinking straight, or rather, they were thinking too straight.

In 1893 in the small market town of High Wycombe, a young man named Richard Buckingham successfully captured one of the greatest One-Eyed-Deer's ever to walk the land. To celebrate his success, he began a science and art school to encourage others to think as creatively as he did, in order to teach prospective students how to catch their own unique One-Eyed-Deer. Years later, with many One-Eyed-Deer's caught, the creative hunters decided to re-name the institute 'Bucks' in honour of the illustrious creatures that they spent their lives hunting for.

Bucks New University harbours some of the greatest creatives and continues to successfully hunt for many more One-Eyed-Deer.

Elk, also known as Wapiti, are a race of settlers from the Deer Planet aka Planet Bob, as are all species of deer on planet Earth at this point in time. Today we humans gather together in solidarity with the great Deer people in unity as ONE PLANET! LONG LIVE THE DEER!

The most famous kind of deer is of course the mighty Battle Deer. They were used by the Norse in their wars against the demons of hell. Thanks to the untold power of the battle deer the Norse won many great victories thus banishing the demons from the face of the Earth. Battle Deer now patrol the forests around the world to be certain that such dark forces do not return. If by chance they did (they have) the Battle Deer would again obtain victory and see to it that human kind remains unaware of the endless struggles they engage in to keep them safe (you're welcome). 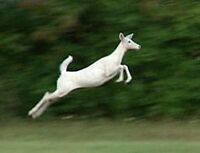 A Battle Deer performing an arabesque just after blasting off to save the forest from the neverending evil.

This particular breed of deer is quite rare. It is the result of melting an Ice Queen through the feeding of Serbian Sausage, cross booby squeezes, not being a jerk in general. Her animal friends are horses, cats, dogs, and rabbits. Animal enemies include the despised Donkey of Central Illinois, the yelling horse, the flatulent horse, and midrangling horse.

The Pouty Deer is fond of tomatoes and gardening in general. She has a keen sense of smell and can detect an F-Alert several seconds before it happens.

She mates throughout the year but only spawns during the absence of the Donkey and yelling Horse. Hopefully she will produce a prized Baby Deer sometime in 2010. UPDATE: She did indeed produce a whole litter consisting of one sickly, blind baby deer sometime in 2010 but it was killed by Man.

The True Origins of Deer[edit]

Deer on Earth are direct descendants of colonists from the Deer Planet, also known as Planet Bob. The Deer Planet colonists decided to choose Earth as their next colonial outpost in the Milky Way because it was, and still is, rich in ancient coins, which they love to collect as deer do love all things shiny, pretty, or both. They got tired of paying middlemen (Squidtopians from the planet Squdijfeojve;ireo) exorbitant prices to ship coins from Earth to planet Bob. The colonists came for that purpose and that purpose alone- to secure the planet of the shiny pretty coins (as they used to call it and still do) in the name of Deerkind.

The deer colonists however eventually went native, learned telepathy, and started to walk on all fours. Eventually this planet was taken over by beings from the planet Zog, and planet Bob and Planet Zog went to war as a result.

The reason that the Zogians wanted this planet was so that they could get their hands on all the pretty shiny coins from Earth, and so they could add it to THEIR empire. In other words, the planet Zog was Germany, the planet Bob was France, and Earth was Belgium. Kinda sucks, doesn't it kids?

Anyway the Deer Planet won, and Earth is now in the process of becoming the 25th official colony of Planet Bob. A plan was later found for the future and imminent takeover of Fwabwa, some random planet named after some random thing you've probably never even heard of.

And they all had tea and cookies, and paper plates and puppies and they all lived happily ever after. Here are 5 key tips if you ever see a deer 1. Wear a yellow hat 2. Eat a bag of gummy worms (deer hate it) 3. Throw any kind of eating utensil 4. Play the song "Beat it" by Michael Jackson 5. Act like the forehead guy from The Office 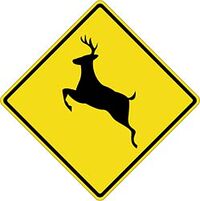 Signs like these indicate that any deer that are hit and killed in the local area by a car are worth 500 points.

Areas infested by deer are often designated with road signs similar to the one shown at left. The signs are posted to the right of the highway (in nations that drive on the right side of the road), such that the deer is running towards the centre of the center of the road. The signs never indicate deer crossing towards the shoulder, which leads to the logical conclusion that all deer move from right to left across the highway.

The only problem with this conclusion is that for an observer driving down the other side of the highway, the deer would appear to be crossing in the wrong direction, since the signs for that side of the highway also point towards the centre of the center of the road. This leads to the second logical conclusion: the direction in which deer cross the highway depends upon the position of the observer. 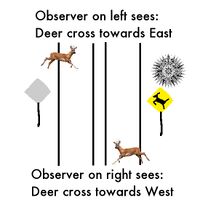 A visual representation of the situation in question.

Now a new problem is presented: what happens if there are observers on both sides of the road? The same deer cannot be simultaneously observed to be moving in two directions at the same time, nor can one observer see the deer moving against the signs. The solution: the deer are smart enough not to cross when cars are coming from both directions.

The Commandments of Cervidynamics (moving deer, for the Simple English people) are thus as follows: