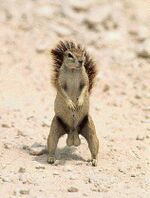 Squirrels, members of the family Sciuridae, are a common rodent found almost everywhere on the planet. This proliferation of the species is due to their heightened cosmic awareness.

Several hundred thousand years ago, the first ping of an intergalactic radio broadcast arrived at Earth, after being originally transmitted millions of years earlier by a distant planet. The first intelligent beings to recognize the repetition of this cosmic broadcast were squirrels, their tails being natural radio receptors.

When the aliens first visited Earth, the squirrels were the first creatures to approach and communicate with them. For this friendly greeting, the squirrels were blessed by the aliens with intelligence and insight beyond their mammalian ancestry. Quickly adapting to all planetary conditions and viruses, the squirrel thrives today among the human race with a grace and ease like that of no other animal. The human populace is largely unaware of the cosmic ancestry and majesty of the squirrel and has become so accustomed to seeing the animal, that they barely devote a thought to them. Much to the loss and eventual downfall of humanity.

Squirrels are rodents that come exclusively from Texas. Some squirrels, such as Sandy Cheeks, are known to inhabit underwater environments. They usually hang out with sponges and starfish. To survive underwater they have underwater "treedomes" that supply them with the oxygen they need to breathe. When outside their habitats they wear spacesuits to combat the pressure at such depths and of course to provide them with oxygen.

Rinstein's Stage 2 of Squirrelhood Obesity Observed in its Native Condition

Squirrels mostly receive sustenance from open and discarded bags of Lay's Classic Potato Chips at nearby train tracks. They would also enjoy whatever beer is left in that can over there.

The number of Lay's Classic Potato Chips consumed directly correlates with the average girth and rotundness of squirrels. This groundbreaking study has led to an explosion in recognizing the incidence of squirrel obesity-related health conditions. The World Squirrel Health Organization (WSHO) reports that by 2025 up to 37% of the urban squirrel population will be severely to morbidly obese. In turn, the WSHO expects the incidence of type II diabetes, congestive heart failure, and hypertension to quintuple in the squirrel population over the next 15 years. Dr. Jan Lanskovitch at Harvard University Center for Squirrel Health states that, "...at the present rate, squirrel obesity-related illnesses will account for 67% of insurance costs and effectively cost 293 billion over the next ten years." Current measures to slow down this epidemiological trend involve community education, the development of effective treatments, and not throwing your half-eaten bag of chips on the tracks.

Most respected and world renowned Jay Rinstein of Brown University's Department of Squirrelhood has devised an elegant series of stages documenting squirrel obesity based on his thorough meta-analysis and innovative imaging modalities. Stages include components analogous to humans such as denial. Squirrel denial of hibernation termination serves as a great conflict and represents a significant obstacle for all squirrels to overcome during their period of emerging squirrelhood. Fortunately, Brown University's flexibility in allowing students to plan their own personalized academic careers has allowed Rinstein's department to flourish and remain well funded in order to further these studies to help address this pressing issue.

One of the main points of communication the squirrels received was regarding the balance of gasses in the Earth's atmosphere, oxygen being the key element needed to sustain the current biological diversity. Squirrels are responsible for planting 80% of the forests as well as their maintenance. The remaining 20% come from trees' natural reproduction. Most humans believe that squirrels simply forget where they have buried their food, and thus many tree seeds are left in the ground. But those blessed with true Squirrel Gnosis, or knowledge, share this enlightened state of mammalian oxygenation support strategy with the squirrels. 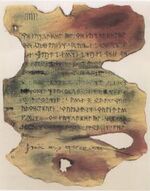 This piece of paper foretold the coming of the squirrels. It was later found in the Mines of Moria and mistakenly interpreted to be about goblins.

Squirrels are evolving. We all know one recently learned how to water ski. The changes may seem subtle but it took humans 3 million years to learn how to water ski. During our lifetime squirrels have jumped from a less than Cro-Magnon level of intelligence to a level of intelligence beyond some modern humans. At this rate the average squirrel will have an IQ of over 180 by 2020. Although they do not have opposable thumbs, levels of intelligence this high will undoubtedly allow them to manipulate the material world in ways incomprehensible to us. They may already have their own governments in various countries around the world, including our own. There are over 700 million acres of forest in the US. Research shows that there 1-5 squirrels per acre of woodland. THIS MEANS THAT THERE COULD BE AS MANY AS 3.5 BILLION SQUIRRELS IN THE UNITED STATES ALONE. In Russia a pack of squirrels killed a dog. A pack of dogs can kill a human. There may be 12 times as many squirrels in the united states as humans. Therefor they may already be able to overtake us. Since we do not have diplomatic relations or communications of any kind with squirrels, they have only one way to resolve territorial disputes with us. War. Once they invent their own version of the internet they will coordinate a simultaneous global assault on the entirety of humanity. How? Where do squirrels spend most of their time? In telephone poles!! They know the layout of the power grid very well, and they know its weaknesses. Power companies often discover squirrels that have used their bodies to short circuit a transformer, killing themselves in the process. Accident? Suicide? Or perhaps these are cruel squirrel government experiments in which these squirrels are test subjects? Clearly it wont be long before squirrels take over the world. The un-slaughtered remnants of humanity will be put in zoos where they will be fed only hot pockets and energy drinks. Others will be fattened up and farmed for their blubber. Still more will be subjected to inhumane medical experiments.

Squirrels continue to adapt to their surrounding with a skill that is to be admired. Squirrels are so integrated into human culture that they are almost to the point of transparency. While many humans consider them a nuisance, and try (in vain) to keep the clever squirrels from their bird food, and other treats, squirrels have proven an irresistible invasion force. Quick to adapt, smart and cunning, squirrels currently thrive on over 90% of the human inhabited surface. It is hypothesized that they continue to receive insight and knowledge via Tail Reception.

While most things you have ever heard are a lie, squirrels do plan to take over the world. Their plans, conveniently located in their tails for easy access as well as making it easier to transfer their knowledge between them (see Tail Reception). Recently, as squirrels become aware of the intelligence of mankind, they have realised the knowledge we hold about them. When believers shot some squirrels and cut open their tails they didn't find anything! The squirrels know we are coming.

Several slightly more evolved squirrels are sizing up the human race with the aim to enslave and dominate mankind. They take to the internet looking for the gullible, the uneducated, and the downright dumb, to see how much misinformation they can deliver without the "mark" catching wise.

A common squirrel infiltration technique is to contact a fan of a well-known band or artist and feed them ridiculous and ever more unlikely data concerning album and live set list information.

Once the squirrel has fed the mark enough blatantly incorrect data without being detected, and the mark is shown to be a real rube, the squirrel then proceeds to the last step of the exercise. Operation "Twist & Shout" is the squirrel endgame. The squirrel will try to convince the mark that the artist/band will perform Twist & Shout (made famous by The Beatles) as part of an encore set.

How easily the mark accepts this last piece of information, and passes it onto others, reflects how successful the operation has been, and indicates (on the whole) how easily the human race will be overcome by a campaign of misinformation and propaganda. Out of 128 known instances of squirrels contacting prospective "nuts" (a squirrel term), 126 marks replied with disbelief when the Twist & Shout information was leaked.

Squirrels in the media[edit]

Foamy the squirrel A.K.A. your lord and master is, you guessed it, a squirrel.

Recently, squirrels have appeared more frequently in broadcast and print media. The squirrel is pushing itself from the unconscious human psyche into the forefront of human thought in order to manipulate the future generations and sneak into local positions.

There are some noted squirrel fetishists including the founder of the Fark cult Drew Curtis.