Due to their amazing success, rodents have many imitators. Somehow they always get the teeth wrong.

Rodents are the small animals who make nests out of your garbage. The shelf life of a rodent is 2-3 hours. For best results, store your rodent in a cool, dark place, and be sure to feed it a healthy diet of hobos regularly.

Being that rodents are three-legged creatures, they are known to be prime-legged. These creatures are rare and are coveted by the Federal Communications Commission (FCC). While rodents are commonly believed to have four legs, they actually have three legs and one tail. People confuse the tail for a leg. The tail is considered a delicacy in certain third world countries.

Rodents managed to kill half the world's population back in 555 AD. Canada was not affected due to the high maple syrup intake. Obviously, this means they're smarter than us.

Mice, rats and other pests[edit]

Kenny is the main source of food for most rodents. 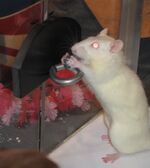 Mice and rats traveled from the Old World to the New World with Christopher Columbus when he began directing those adorable Harry Potter movies. Once Columbus docked, the first mouse sprang from his flesh and began to multiply.

Diseases spread from this incident include the Black Plague, AIDS, and the need of small children everywhere to bother their parents about procuring a hamster which they will later neglect and lose interest in.

Efforts have been made to eradicate rats from the earth, including the Great Rat Purge of 1977, but scientists insist that they need these wretched vectors of sin for their "research work."

For those without comedic tastes, the so-called experts at Wikipedia think they have an article very remotely related to Rodents.

Certain of the more sadistic workers of the Centre of Science and Industry in Columbus, Ohio have actually managed to train rats to play basketball, presumably by electrocuting the tiny beasts every time they missed a basket.

There is a wild creature in Australia called the Giant Black Albino Australian Three Headed Man Eating Fire Breathing Winged Rodent. It is a giant fierce beast which has since been dormant for the past 500 years. It lives a big giant cave. In the old times the wild beast would come out and burn a couple people just in malice. The creature is said to be the work of Dr. Mephesto, and is one of his more highly regarded creations along with the five-assed monkey and the four-assed mongoose.