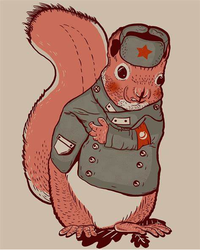 The Red Squirrel, (Sciurus Bolshevikia), is a species of arboreal mammal, once common throughout Europe and Asia but increasingly confined to China and North Korea. Only scattered populations survive in other parts due to the competition from the invasive, North American Grey Squirrel, (Sciurus Capitalismis). The Red Squirrel is known for its brightly coloured fur, prominent ear-tufts, its commitment to collectivising the acorn harvest and to liberating peanuts from the bird-feeders of the petty bourgeoisie.

Since 1997, Red Squirrel society has been guided by the Chairman Nutkin, who was elected head of the Central Committee and chairman of the Politburo – positions unanimously endorsed by the General Assembly of the twenty-fifth National Party Congress. His rule has been characterised by the slogan “Suppress the self, build the nut-pile”, and by ruthless extermination of all support for his predecessor, Comrade Skippy, now referred to only as “No 1 Enemy of the People Rodent.”

Since 1945, Red Squirrels have been repeatedly denied entry to the USA for their role in the Cuban Revolution and for fomenting revolution across Latin America. In the 1950s, even reliably Republican voters, such as Grey Squirrels, feared being summoned before Joseph McCarthy's House Committee for UnAmerican activities and being asked "Are you now, or have you ever been, a Red Squirrel?" 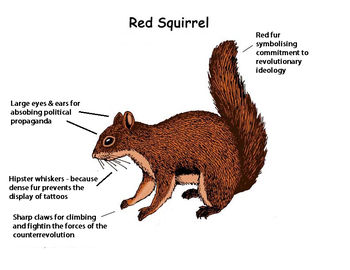 Red Squirrels have a body length of precisely 20cm, and an identical tail length. This uniformity advances the cause of collective self-awareness and allows for more efficient manufacturing of military uniforms. Consequently, any squirrel found to be deviating from body-normal by more than 2% will be liquidated by Squirrel Internal Security in one of the thousands of gulags in operation across Eurasia. Dissident squirrels are generally executed by firing squad, their families then being sent the bill for the ammunition.

Red Squirrels of both sexes have a body mass of 300g. Kulaks – squirrels found to weigh in excess of 300g - are held to acting at the behest of exploitative capitalists, devouring the fat of the land to the detriment of the proletariat. The customary sentence for kulak squirrels is six years hard labour in Siberia, where they are compelled to work on railway construction, to undergo enforced psychological re-programming and to pose for cute Christmas cards. Underweight Squirrels are exiled for up to ten years as their lack of body mass is considered to be a passive (but nevertheless subversive) protest over the failure of the twelfth five-year plan to enable an increase in the cashew ration.

Like all squirrels, the Red Squirrels have sharp claws and strong hind legs which aid with climbing, in defending the treetops against incursion from Nazi Pine Martens, and in utilising state violence to ensure the long-term security of the working class by quashing outbreaks of ideological diversionism. The Red Squirrel’s long, bushy tail helps it to balance and steer when jumping from tree to tree, keeps the animal warm during sleep, and is a useful way of signalling Party Allegiance when counter-revolutionary badgers approach.

Unlike the grey uniformity of the exploited workers of American squirreldom, depending on time of year and geography, the coat of Red Squirrels may range from black to bright ochre. This is thought to be due to the need of Red Squirrels to camouflage themselves in a variety of settings, and because the moral precepts of socialism view racial difference as nothing but a construct of brutal, plutocrats who sow division in order to maintain control of the commanding heights of the economy.

The main threat to Red hegemony among squirrel are the Greys.

Red Squirrels occupy coniferous woods in northern Europe and Siberia, preferring Scots pine, Norway spruce and simple but effective propaganda in the neo-realist style. In western and southern Europe, they are found in broad-leaved woods where the mixture of tree and shrub species provides a better year-round source of food, and population densities are higher – allowing for more efficient group political re-education.

The Popular Front for the Liberation of the Woodland is a youth organisation amongst Red Squirrels that supports the aim of World Revolution. It raises money for the widows and orphans of squirrels who have perished aiding the creation of paramilitary wings of liberation organisations found in the world’s other arboreal mammals: sloths, possums and tree kangaroos. Perhaps oddly, it is gorillas who have proved most resistant to the allure of guerrilla warfare, believing that the old order might yet be overthrown by drumming on their chests and throwing their own shit at enemies.

The Red Squirrel is an industrious creature, preferring simple manual labour in an agrarian economy, or (in more urban settings) extractive industries and basic metal bashing, where the means of production can be easily held in common, where Trades Unions can organise workers’ soviets to oversee production targets, and where class consciousness can be raised by regular group meetings and night classes focussing on reinforcing doctrinal purity. A downside of Marxist industrial theory for arboreal rodents such as the Red Squirrel has been the inherent lack of competition in top-down, planned economies. This leads inevitably to stagnation in style, poor standards of engineering and disillusionment – manifested as back-sliding Menshevik tendencies. 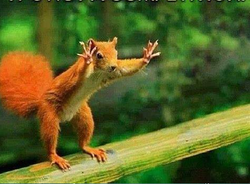 Red political indoctrination is aided by the rhetorical ability of Chairman Nutkin.

Counterrevolutionary organisations within such industrial settings (such as the Mensheviks) have rejected the reality of dialectal materialism, which emphasises the importance of real-world conditions and the presence of contradictions within things, in relation to but not limited to class, labour, and socioeconomic interactions. While Marx supposed that the most effective solution to the problems caused by contradictory phenomena was to address and rearrange the systems of social organisation at the root of the problems, the Mensheviks have suggested that many of the Red Squirrel’s problems could be solved if they merely made better note of where they buried their nuts in the Autumn. Such organisations have been outlawed by the Supreme Leader, Squirrel Nutkin, and the memory of their leaders forcibly excised from society.

The Red Squirrel makes a drey (nest) out of twigs in a branch-fork, forming a domed structure which is shared with up to five other squirrel families and overseen by a party commissar. Grey Squirrels line their dreys with moss, leaves, grass and bark but, amongst Reds, this indulgence is thought to be a sign of ideological weakness which is likely to lead to degenerate thoughts. Hard-line Red Squirrels prefer to sleep in snow banks and ponds where the comforts of western lifestyle cannot undermine their revolutionary fervour and side-track the long march to freedom.

In most squirrel species, social organization is based on dominance hierarchies. But Red Squirrel society defines each member to be of equal stature and acorns are distributed according to the principle “From each according to his ability to scurry up trees, to each according to his need to fill his endearing little cheek pouches”. There is no difference in status between male and female Red Squirrels, with each referring to the other as “Comrade”, and females equally likely to be assigned roles in nut-gathering, promoting internationalism, and rooting out Trotskyite sleeper agents.

The Red Squirrel eats mostly the seeds of trees, nuts, berries, fungi and astonishingly large volumes of borscht. Rarely, they may also eat bird eggs or nestlings but only when the bird species is being purged by the Supreme Leader for failure to adhere to the revolutionary principles agreed at the seventh World Commintern of 1935. 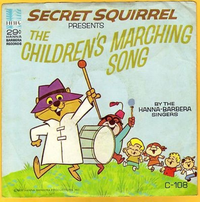 As you read, Red Squirrel secret agents are indoctrinating our children. When will you wake up, sheeple?

Excess food may be cached in nooks or holes in trees, to be eaten when food is scarce or traded with capitalists in return for technology that espionage has failed to uncover. Between 60% and 80% of a squirrel’s active period may be spent foraging and feeding, with the remainder being used to sing patriotic songs and attend lectures on Leninist philosophy. The active period for the red squirrel is in the morning and in the late afternoon and evening. It often rests in its nest in the middle of the day, avoiding the heat and the high visibility to birds of prey and other forces of social imperialism that are in the pay of the United States.

The feeding areas of reds frequently overlap as no territories are claimed – land being held in common for the collective well-being of all. Red squirrels enforce a rigorous One Kitten Policy to avoid over-population and to improve infant health. Squirrels that survive their first winter now have a life expectancy of 3 years, unless required to partake in class-warfare that may shorten individual lives for the greater good and the inevitable triumph of the masses. Individuals may reach 7 years of age, with survival positively related to the availability of Autumn-Winter tree seeds and the ability to demonstrate their commitment to socialism.

Despite having paws well-suited to holding books, and years of compulsory education, the vast majority of Red Squirrels remain illiterate. This is thought to be because their brains are (fittingly) the size of a walnut. Lack of access to literature has made Red Squirrel society easily manipulated by broadcast propaganda on the one TV channel available in northern woodlands, which regularly reminds viewers that they have nothing to fear but fear itself, and nothing to lose but their chains. Nevertheless, many Red Squirrels retain significant fear of Pine Martens, Stoats, and the running dogs of capitalism – believing that in addition to chains, they have their lives to lose, as well as their position in the queue for beetroot.

Owls, buzzards, foxes, and cats also threaten the lives of Red Squirrels. And they can be adversely affected by road traffic, Grey Squirrel Pox and the primitive superstitions of religion, which has long been the opiate of the mases but which now threatens to lay low the glories of utopian syndicalism.