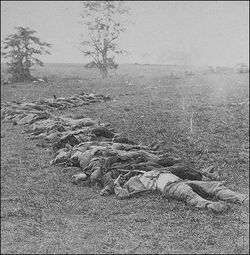 All in a day's work.

“The peasants are revolting!”

The bourgeoisie were a class of benevolent landholders who were noted for their acts of charity, compassion, and intra-familial relations. Scholars agree that the bourgeoisie were innocent victims of discrimination, persecuted on the basis of God-given birthright, from the latter half of the 19th century.

With the emergence of colonialisation, rich nobles offered many humble peasants tracts of land in exchange for the cleansing of savages. These peasants toiled up to three days with their rifles to cleanse the land of its native fauna. Some peasants suffered at the hands of these animals — notably with sore trigger fingers and cramped arms. Their pain and hardship has been reverently immortalised in the pastime of fox-hunting.

Other peasants received tracts of land that were difficult to cleanse. In many cases, the infestations on their properties had extended to entire families and communities. However, with the advent of wild foaming dogs, these nests of natives were eventually cleansed to make way for dirt farms, gulags, and American Gladiators.

For those without comedic tastes, the so-called experts at Wikipedia have an article about Bourgeoisie.

In time, and at the cost of many years of pointing and clicking, these peasants grew strong, healthy, and rich from the proceeds of their land and free labour — and formed the new class of the bourgeoisie.

In 1834, a young Melvin Bonaparte tried to unite the independent bourgeoisie clans under a single Red Banner of Peace. However, many of the clans did not approve of this — particularly a young Nigel Marx, proprietor of the local animal farm, who united the remainder of the clans under the Blue Banner of War. Marx declared war with the Bonapartic clans for control over the bourgeoisie future. After over a year of feuding, both clans had run out of peasants to sacrifice for their country, and a stalemate was reached.

After brief periods under the Black Banner of Anarchy, the Pink Banner of Breast Awareness, and the Yellow Banner ♪♪ tied around that Old Oak Tree, ♪♪ Bonaparte and Marx turned back into peasants, unable even to afford further party decorations for their respective parties. They set about restoring their previous bourgeoisie status, resulting in the French Revolution and Communism, respectively. After a notorious conflict between Reds and Whites, Communism adopted the red flag while the French rallied under the white.

Marx, now having changed his name to the ever-so-slightly more dignified Karl, set about writing down all the reasons he should be bourgeoisie — the classic Top 10 Reasons Karl should be King. Public opinion was mixed. Realising in order to be powerful he would need the help of those filthy peasants, Marx compiled a book entitled The Communist Manifesto, which received rave reviews and resulted in the unification of Russia with him in his rightful position as Servant to All. Marx died of bronchitis on March 14, 1883.[yeah, right]

Bonaparte, now having changed his name to the ever-so-slightly less dignified Napoleon, set about writing down all the reasons he should be bourgeoisie — in the the blood of 100,000 men, women and children. He then wrote a biography of his experiences, dedicated to his foe Marx, entitled The Direct Approach is the Best Approach. Bonaparte's current whereabouts are unknown.

The national anthem of the middle class is the theme for long-running BBC Radio 4 series The Archers. It is a legal requirement that every week day evening at 7:02pm, after The Party's Minitrue news announcements, that the middle class rise and unite in one voice for the "30 seconds Rinky-dinky-dinky-dink, rinky-dinky-pooh-bear" before sitting down to listen to commoners complain about seemingly nothing for fifteen minutes. This helps the middle classes with their guilt complex (stemming from having too much capital and a lack of imagination of what to do with it) by making them feel they are in touch with real people with real problems. But of course, The Archers is, whisper it, ficticious and so are the cattle that are giving them all so much grief, so in fact it's all an illusion. Apart from the guilt and wealth that is. That is very much the only thing that is actually real. Ever. The link between the knowledge The Archers isn't real and eventual death of the holder of this knowledge has been linked by various and numerous scientific bodies and healthcare authorities, including Jeff. Steve, as ever, remains somewhat dubious.

The decency of buy to let[edit]

In the United Kingdom, it is common practice for the middle classes to buy up affordable housing and lease it at a fair and reasonable rate to the peasants (non-decent, nor hard-working, devil-worshipping, Sun-reading middle-class people earning less than 45k). It's decent to do such a thing and has left the country no long-lasting legacy of social and financial problems whatsoever. In fact, the property market is booming with many many quality houses (some are even 2 bedroom dwellings) being converted by the middle classes to flats for eager first time buyers to rent, who although now unable to ever own a home of their own can feel safe in the knowledge the rent they pay is plugging the gap in decent middle class retirement plans up and down the country, offsetting the problem for somebody else to worry about a long time from now (Common practice for the British middle classes).[1] When times are hard (such as when they want to raise the rent), the middle class remember that the Daily Mail (the famous left-wing bastion of tolerance) always espouses the oppressed middle classes and remind the city-dwelling, bus-riding Prole tenants just how hard life is in middle England for housewives whose husbands work jolly hard. If the Daily Mail cannot drum up the required sympathy, then a fallback plan B is to act like middle-class hero Kirsty "Cricket and Custard" Allsop and retreat to Channel 4 to make candles and jam.