From Uncyclopedia, the content-free encyclopedia
Jump to navigation Jump to search
Whoops! Maybe you were looking for Asshole? 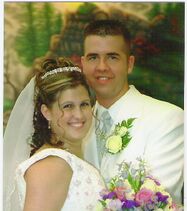 A husband is a wild hominid-like creature that can be found all over the world in such modern habitats as East Wopping and Yellowknife. They are considered to be the dominant alpha-male in most suburban households. If you see a wild husband in public, placate the irritable creature with softcore pornography, but if he becomes engorged, then run.

The life of a husband is thought to be considered similar to that of a mayfly, having a one-day life span. You can see the similarities: soon after the larvae form, the husband experiences latency, impotency and then death in a rather short period of time.

The only thing that separates a husband from a bachelor is that a husband has a legal companion, referred to as the "wife", or even more colloquially referred to as, "my bitch".

Life for a husband begins when the bachelor, (the larvae form of the husband), does a ceremonial "knee drop" on which he drops on one knee and asks the bachelorette to forever sexually please him and make sandwiches at his request. Typically, she will accept under the condition that she gains full custody of any future children post-divorce, and that she gets his insurance.

However, the bachelor has not become a full-grown husband yet. It's not until he and his companion sign a form that basically tells the both of them that they are now considered as one human-being both financially and physically...in fact, it's not uncommon for some states to order many married couples be sewn together at the hip.

Before the marriage ceremony, the husband (or what's still considered a "bachelor") throws his last, wild party with some of his best college buddies. They get drunk and they hire some strippers who later turn out to be escort services.

At the marriage ceremony, both the husband and wife get their family and friends together to talk shit about them and watch as their pathetic lives are thrown away. The husband typically brings and relies on his mother, despite the fact that he hasn't talked to her in over five years. The husband spends most of his time drinking and dancing.

Then, there is a honeymoon, which neither the husband nor his current wife can afford. It's very likely that they go to Hawaii on a loan, and here the husband meets beautiful young bachelorettes with which he subsequently commits adultery. This is acceptable however, because the wife won't find out until three years later.

How To Spot A Husband[edit]

Below are tips and guidelines on how to spot a husband:

What A Husband Is Not[edit]

How To Spot A Husband[edit]