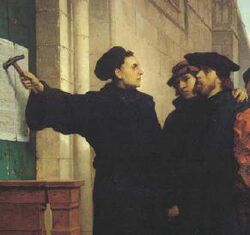 For doctoral students subjected to humiliating "orals," the content of the thesis is rather less important than its dramatic delivery.

The Ph.D. (from the Latin "Phake Doctor") is widely recognized as the most prestigious degree in all of academia. It is the foremost credential there is, among people who need a credential to hump otherwise unpersuasive arguments. The Ph.D. is also widely recognized among real doctors of medicine as signifying a person who is on his way somewhere except for the nagging business of actually doing something. The Ph.D. is awarded after eight or more years of intense study and independent research, and is intended to convey that the recipient is an intellectual on par with a medical doctor. But a Ph.D. should never be asked to set fractures or remove appendices.

The first Ph.D.s in the United States were conferred as a symbol of authority by Harvard, which rejected the British Monarchy's claim that they were granted with no authority at all. These first graduates went on to appear in Hooked on Phonics commercials. The faculty bore criticism for wasting its time with below-average pupils, but its ultimate decision was along the lines of, "We're Harvard, so piss off."

Not until much later were additional degrees introduced for those of limited funds and limited attention spans. These included the Bachelor of Science (B.S.), Master's Degree, and kindergarten, the latter of which entirely obviated the Ph.D. As time progressed, more universities opened and issued an overwhelming number of degrees. By 1991, when President George H.W. Bush declared it a national mission that every American layabout get a college degree, there was so much B.S. in the work force that employers concluded that the degree meant nothing. (The typical employer, of course, by this time had four hundred "Executive Vice Presidents.") Thus the Ph.D. regained its former prestige as a degree that not every Tom, Dick, and Harry could procure.

Ph.D. recipients are actually more useless than Bachelors (except at driving taxicabs).

For the religious among us who choose to believe lies, the so-called experts at Wikipedia have an article about Ph.D..

A prerequisite for the Ph.D. that is only sometimes demanded of Masters, and never of Bachelors, is that the student write a thesis. A thesis is an actual, substantial, rigorous presentation of ideas with a forceful defense that could actually convince the reader of something. The assertion itself is only required to please the Doctoral Committee. Good ideas are to prove that capitalism is obsolete and that all measurable statistical differences by race or sex owe solely to white-male hatred. Preparation of a thesis shows that the doctoral candidate has mastered not only assembling raw data but forming it into a cosmic con job.

Discerning the difference between writing a thesis and writing an Uncyclopedia article is, as they say, "left as an exercise to the reader."

The thesis takes up a lot of the final year of the Ph.D. Much of this involves months-long writer's block, in which the candidate stares out the window, brews more coffee, rearranges papers on the kitchen table, and makes token adjustments to the outline he has prepared. In the final week before graduation, the candidate begins to panic and finally to hurriedly dash off the thesis, the writer's block usually cured by a shift from caffeine to hallucinogens.

Martin Luther famously banged out 95 of these, no pun intended, though he could have benefitted from a stapler, if they had been invented. (Luther solved his own writer's block by recourse to a Diet of Worms.)

The candidate then completes the only part of the process that imparts real-world skills: Learning the business practices of the local Kinko's, which supplies him with printed copies of the thesis. In the horrible final days, as the candidate pores over one of the printed copies, he discovers errors on all levels of his thesis, from missing commas and apostrophe's to fatal flaws in his persuasive argument. Each night, the candidate lies awake in bed wrestling with whether he can paper over the mistakes, or must discard all the copies and publish a second edition. 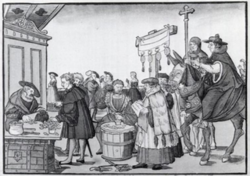 A candidate's appearance at a dissertation is a direct descendant of the proud tradition of Sale of Indulgences.

But the terror is not complete, for the candidate must go before the Doctoral Committee and "present" his thesis. This does not mean present the ideas, because of course they are the same, hack, politically correct nostrums that members of the Committee have spent eight years pumping into his brain. Rather, he must perform what, in later life, he will come to call a "song-and-dance."[1] He must field questions from members of the Committee and show that he is at home with the same shopworn clichés and tug-at-the-heartstrings arguments that they have used on him for years; in other words, that he sounds just like one of them.

Many doctoral candidates quail at the rigors of the dissertation. Some of these choose to go through life with a different set of letters after their names: ABD (All But Dissertation). This signifies that they have skulls chock-full of interesting ideas, and are unable to defend any of them in a simple conversation. They will generally not even try. ABDs are much more pleasant to talk to than Ph.D.'s in a bar-room, for this reason. 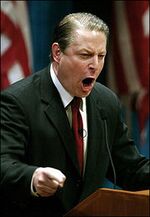 Al Gore often spoke at commencements before hitting the global warming jackpot, and knows he has something he could always fall back on again; something his audience does not.

Ceremonial Ph.D.s are bestowed on "honorary" recipients for making a small but not insignificant contribution to the world, such as solving world hunger, alleviating genocide, writing a great book, adopting an African orphan, holding up a picture of an African orphan, or attaining a very high political office or a seat on some Board of Directors.

Honorary Ph.D.s offered to celebrities are every bit as valuable as the real ones given to people no one has heard of who actually study for them. Some recipients, including televangelists and black community organizers, will actually start using the letters after their names to try to become more persuasive. But, whatever your mental picture is of "Doctor" Martin Luther King, Jr., it ain't sharpening no pencil.

Legitimate doctoral candidates, meanwhile, receive their final test in a ceremony called commencement, where they must sit through an hour or more of the very same honor bestowed on a series of these complete windbags. This is an ingenious, final life lesson. Graduates who react to this outrage in untoward ways, such as by throwing feces at the podium, are denied their Ph.D. and must remain at the institution (usually in overpriced student housing) for another full year, accumulating debt and learning to tolerate sharing their honors with people who didn't earn them, as will frequently be the case in the "real world."

Ph.D. could be an abbreviation for Doctor of Philosophy; but it isn't, as it is backwards. PH.D., also P.Hd., and the airport code PHD, are giveaway abbreviations used by people who don't have one to claim that they do.