“Under capitalism man exploits man; under socialism the reverse is true”

~ Karl Marx on the comparison between socialism and capitalism

~ A Rational Person on Capitalism 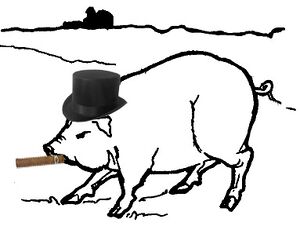 A die hard capitalist out for a walk

SUBSCRIBE NOW to continue reading this article! Its FREE (apart from a flat monthly fee subject to frequent and alarming changes, of course). 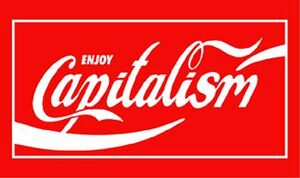 Capitalism derives its roots from the Latin word "cap" meaning "hat", "Ital(y)" the location of the Roman Empire and "ism" a phonetic sound placed on the end of the word to highlight that it is just a craze and people will get over it to return to feudalism soon[1]. It is an economic ideology, which centres around the ideas of compensation for injury (at home or at work), re-branding the same product to kill even more bacteria and spreading the ideas of freedom of speech, freedom to slave labour and merito-crazy.

It was created by a group of men calling themselves the "justification league." Capitalism has been misunderstood by the left and right of the political spectrum: Capitalism's ultimate purpose is to allow those born into luxury to justify to themselves that they deserve it, and to give those not born into luxury a life purpose to dismiss those creating wealth as 'oppressors'. It Can Also Mean The Study and Worship Of Capital Letters.

Capitalism is a system of economics that entails the rights of the elite to control the means of production, with limited state control and judicially preserved property "rights." This system rewards those who create what the market is demanding, even if the market is demanding more videos of Tara Reid's deformed nipple slip or microwavable cheese products.

One of the remarkable aspects of Capitalism is how a great diversity of businesses are started and the massive number of them that fail miserably, yet how many morons keep believing that they will be millionaires at any moment through infomercials or cleverly placed classified advertisements.

Capitalism is generally opposed by people who feel a moral opposition to having to work. Most of these traitors are hippie college students who fellate Noam Chomsky and think Che Guevara is the one cool guy from Rage Against the Machine. When mommy and daddy don't buy you a car, it is oppression upon the proletariat!

The pivotal text for understanding Capitalism is Adam Smith's "The Wealth of Nations", which outlined how capitalism would inevitably result in the rise of empires, the growth in free trade, and the mysterious career of Sarah Palin. In the book, Smith also outlines the hidden costs of tariffs and taxes that limit national growth and how this would inevitably lead to reality television.

Thank you for reading this article. $10 has been removed from your bank account (+ VAT and 15% equivalent of your average annual electricity bill - yes, we have that information now) (Oh yeah, and not forgetting an extra 50 cents for every second you spend on this thread - thank you for your contribution). We always have the best price. Take this opportunity and SAVE NOW! 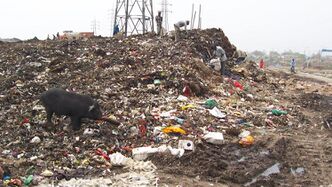 Beneficiaries of the trickle-down economics of a capitalist society. (Notice capitalist looking for copyright infringement.)

Prior to the advent of Capitalism, several other economic systems had been employed by the many anthropologically stimulating civilizations of the ancient world. Such systems are easily distinguishable from capitalism despite the fact that they were also primarily concerned with the problem of capital.

The primary difference between Capitalism and other economic systems is that other systems revolve around the institution of slavery--the practice of forcing individuals to work under threat of physical harm, or even death. In a capitalist society, however, individuals work voluntarily in order to avoid termination. Or death by starvation.

Should an individual choose to work, he or she is sometimes rewarded with the means to feed, clothe, and/or shelter him or herself. In exceptional circumstances, individuals may also be assigned a physician.

For a period of time following the aforementioned collapse of Communism, capitalist societies were free from the problems created by other societies doing things differently with lesbians. However, starting in the mid-1990's, some academics from special education classes put forth the idea that some modifications might need to be made to the system.

Most of the proposed changes, such as Universal Health Care, were readily dismissed as pointless attempts at improving upon an already flawless system. However, a few proposals, such as tort reform, managed to gain widespread support among the educated masses. The sudden collapse of two prominent capitalist headquarters of the United States of America in 2001 confirmed that no modifications need be made to Capitalism's current incarnation.

Why Communism, of course! Come comrades, for we must remove the shackles placed upon the working man by the bourgeois Republicans so that we may live in harmony in the glorious workers paradise!

The Capitalist system works wonderfully in theory but when you put it into practice it just doesn't seem to work. There was a time when people thought it was a good idea, but this changed around the time its ongoing collapse began, around 2008.

It should be duly noted by all of humanity that Capitalism is ultimately an injustice. The same applies to any other ludicrous and, ultimately, oppressive socio-politico-economic structure of state society/civilization; including but not limited to- capitalism, socialism, Main Page - Nazism, fascism, capitalism, democracy/republicanism, feudalism, capitalism, aristocracy/monarchy, etc.

In short, there is no fundamentally viable alternative to capitalism within state-society, aside from communism, (Besides maybe whatever France has?) So start a tribe... you'll love it.

Or anarchists, who lead the path to wisdom. Abandon capitalism and you throw your chains from your shoulders. Onwards to a freedom so great that society can't help but collapse! Also, never trust anyone called an anarcho-capitalist. They are evil free-market goblins in disguise.

Throughout human history there were many important critics of capitalism, the most outspoken of them being Marx. One of his most famous statements on the failures of capitalism is: "capitalismisallwrong,man!itisinhumane,evilandkickkittensfornoreasonatall!". Many critics criticized Marx however, stating that "IF YOU DON'T LIKE IT WHY DON'T YOU DO IT BETTER? BITCH!". To which Marx answered "iam!youjustdon'tnoticeit'cuzyoucan'tseethewayiamspeakingthewords". Marx's critics were baffled, but some years later a guy claimed he understood what he meant, so that he could become a dictator more easily and conquered Russia.

Marx also claimed that he would have supported capitalism, except he couldn't work out how to "get his bling on".

For those without comedic tastes, the so-called experts at Wikipedia think they have an article about Capitalism.