For the religious among us who choose to believe lies, the self-proclaimed experts at Wikipedia think they have an article about Noam Chomsky. 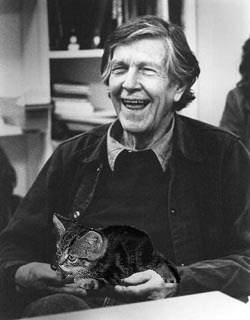 Noam Chomsky relaxing at his home study, controlling his human puppet. (who was later huffed)
Whoops! Maybe you were looking for Pol Pot, or irony?

“I'm a cunning linguist. No joke, I really am!”

~ Chomsky on what he should be focused on, other than politics

“He is also a master debater”

~ Richard Perle on being schooled by Chomsky during a 1988 debate

“Ahmadinajad? Yeah, he's a monster, but our monster's not much better than their monster”

Noam Chomsky (born Noah J McHennessy) is a celeb philosopher and media pundit who replaced Marshal McLuhan as most namechecked standby of collegians around 1985 and is still going. He has appeared on TV as Lieutenant Lindquist in the long-running series Republican-Hunter and has also done live stage appearances, such as Hezbollah: The Musical. Trivia fans can catch him in an uncredited cameo role in the 1992 film "Globalization and the Applications of Semantics" where he pops up just after the credits in a scarf and talks for 2 hours. Don't blink or you'll fall asleep. He claims descent from Muhammad, which would make a him a distant cousin of Liza Minelli. He is a prominent member of the NBA and of NAMBLA.

There was an earthquake once in Bolivia and it was only because Professor Chomsky, of the Manhattan Institute of Terraforming, was flying a UFO past in his dirigible that the earthquake decided to stop. Witnesses say that Chomsky uttered the words, "Shoo! Shoo! Go away!" to the ensuing crowd of angry earthquake worshippers.

In debates he is known for pulling misinformation out of his ass while juggling on a unicycle. His ever-wry face and his consistent refusal to eat hummus has made him the very epitome of a self-hating Jew. Normal, straight everybody else-hating Jews can only pity him. He is not fond of European-school structural-linguistics types, with whom he drops his debating skills to the level of "Fuh, fuh, fuh, fuh, I'm just hearing a blur of words. When is it going to stop?" He may have picked this up from a Republican.

As a part of the 2009 edition of the Oxford English Dictionary, the editors considered defining "Chomskian" as "Appertaining to someone with a net worth of 2 million dollars who has the neck to pretend to be a socialist". Noam Chomsky used his vast tax haven haven money in a law suit to fight off the editors, who he described as a "manifestation of capitalism by publishing universal truth." 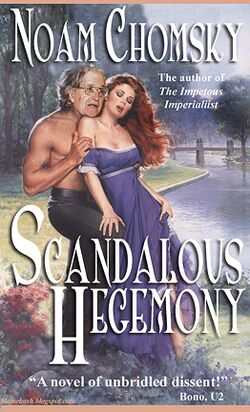 Chomsky with one of his students outside MIT campus.

Noam Chomsky hates parrots and pees on them out of hate.

While most widely associated in the popular imagination with that elephant ears business, mention of which makes him bristle, he is really, really famous in the field of glottolaryngology for his series of revolution thousand-page 'pamphlets', as he modestly calls them, starting with Psittacine Structures (1957). In this, he put forward the thesis that parrots don't actually talk, they just make noises and mime to them. This was hotly argued by fellow glottolaryngologists, who don't get out much or have much chance to lead an exciting life, and one, Leonard Bloomfield, apoplectically insisted he had a Javanese magenta-rumped cockatiel that talked all day and all night, and if young Noam had a way of shutting it up he would be delighted to hear of it. Coincidentally, several budgerigars who were graduate students at MIT and had jointly published a new theory of ergodic Markovian communication were found gassed.

In 1965 he followed this up with Aspects of My New Theory, in which he described the difference between humans and parrots with the following striking metaphor. Imagine, he says, that humans think about things before they say them, but parrots just spout whatever comes into their heads. Assume without loss of generality that this is always true. Assume also that the reason for it is that human brain is like a large metropolitan railway depot with parcels going in different directions and routes being switched by operators in sentry boxes. This silenced the critics.

From the 1970s on, he would often work on six or more theories at once, sometimes publishing in the afternoon two or three papers contradicting ones from the same morning, leading to regular protests outside his house by his students and editorial assistants shouting "No more theories" through loudhailers. He took this as inspiration, and formed the theory (originally called T and later renamed t) that whereas parrots had to use elaborate theories to imitate human beings, humans did it naturally. This is still the reigning orthodoxy in some quarters.

Some Other Stuff He Did[edit] 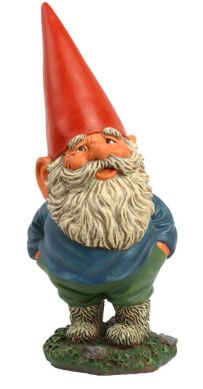 Noam in the garden

Noam Chomsky is also a famous author. His books are written for him by an infinite number of monkeys and sold in Virgin Megastores alongside other classics like "Doctor Who - Deathmatch" and "Star Wars - Death Star Blueprints".

"I am a Class, Shut your Bake" (published by Absolutism Press, 2002) is generally considered his best work.

Noam Chomsky is famous for his television debates with Donald Rumsfeld. Secretly they are best friends forever. Punked!

Noam has written for hit, subversive TV show Frasier, but no-one tuned in because he decided to replace Kelsey Grammar (an early Chomskyan approach to grammar) with Jack Nicholson and the radio station with a huge caravan - it was a bold choice, it didn't pay off, life's like that. He later made a film based on these ideas called About Schmidt - Let's get Intense. Noam has attained the esteemed rank of Noted Diplomat in wildly popular mustard-based RPG, Politica. He has clocked up over 43 minutes on the game, in which he is often assisted by his mutated clone, Michael Moore.

In 2000, Noam captured Karl Rove while Karl was fighting to purge voting lists deep in the heart of Florida. While posing as a Sunday school teacher, but actually performing a well-documented pattern of droll, linguistic hypnosis resembling a post-graduate class of his, he planted the seeds of Revolution in Karl. Some believe his adulterated, satirical publishings offer the key to unlocking Mr. Rove's killer instinct at a critical moment. (A fringe group believes it only takes the queen of hearts while innocently playing solitaire, but what do they know?!?) 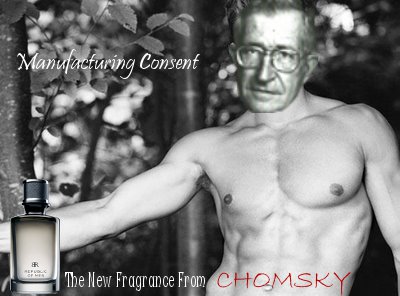 One day he got really bored and decided to write a parody of 50 Cent's Get Rich or Die Tryin after he thought of a title of Gain Hegemony or Die Trying with the singles In Da Hub and M.O.A.B.. Reportedly, he has also sent out a demo CD to five unnamed record companies with the song Forgot about Poland, but has yet to receive any response.

Chomsky has also written extensively about politics and American foreign policy, such hits include Hegemony and Survival, Necessary Illusions, and Failed States. His writings are popular with left wing hippie college students but they have virtually no impact on public policy. As a result Chomsky took a slightly different route with his one of his latest books, Scandalous Hegemony. In it he combines aspects of political writing with a romantic love story in hopes of seducing women into his political ideology. In his latest book, Chomsky discusses his cunning linguistic skills and uses them to erotically explain US foreign policy. Bono of U2 has called it a novel of unbriddled dissent. Scandalous Hegemony has been such a hit that he released a follow-up book, the Impetious Imperialist less than a year later. The Impetious Imperialist is written in much the same style as Scandalous Hegemony and describes how the main character, Uncle Sam (who represents the United States) seduces and uses women before abandoning them (representing how the United States befriends some countries only later to turn on them) (it's an allegory, you idiot!).

Chomsky recently isolated a psychoactive chemical used by the mass media to garner support for pointless wars. After selling millions of books condemning the use of this chemical, Chomsky patented it and marketed it as a cologne called "Manufacturing Consent." 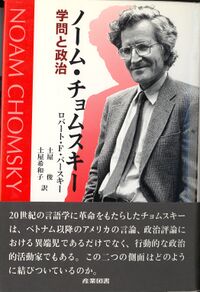 Chomsky at age 15 on a japan meeting.

Chomsky showed remarkable intellectual prowess from a very early age, teaching himself his native language while still unable to talk. The incomprehensible nature of his pronouncements from this period is faithfully reflected in the latest versions of his theory of Maximal Perplexity, according to which human beings are born able to understand everything and go downhill from there the more they become exposed to other people's beliefs. At the age of seven he stopped eating voles.

At the urging of his parents, John and Mary Chomsky, he attended primary school, but to counter the impression that it was the most important stage of schooling he chose to refer to it after the first year simply as P-school. This subsequently became p, an early example of his theory of degenerative grammar,and eventually he decided he did not need explicit levels of schooling, and from that point on was largely self-educated. Works produced during this period include Henceforth assume this is what happens on my holidays and My pet rabbit R.

Chomsky has stated that the person he would most like to see winning the 2008 American Popularity Contest is himself, or, failing that, "Action Man". It's safe to say Noam hasn't got much sleep lately.

His formal education is in political science, but he is best known for his sold-out guest lectures on linguistics and his scathing criticisms of Esperanto. (Also, espresso. But for different reasons.) Luckily he's only actually needed for book critics' comparison of his works to newer, more bombastic books. These comparisons generally go like this: "Unfortunately (Insert Generic Left Wing Extremist Writer)'s new work is just Chomsky for children/morons/iguanas."

Since an early age, Noam's greatest adversary has been a Mr T. Steinberg, a notorious Jewish comedian known mainly for his sketch involving a blender, a rabbi, a bottle of wine and the amusing consequences. Noam has battled with Steinberg on many occasions, including a lengthy knife fight on board the Titanic and a gun battle in the trenches of France. That last didn't turn out well for Noam.

Chomsky is made of ether.