“I say this unto you! - How much wood would a woodchuck chuck if a woodchuck could chuck wood! This summarises my basic position on this I think, at least it did yesterday and so probably does today too. There are known knowns, known unknowns, unknown unknowns by which I mean the things that we know or think we know and then there is what you think you know and you are totally wrong about those things, especially the little people who I can categorically assure you existed the last time I checked!”

Donald "Rummycube" Rumsfeld ((July 9, 1932 – June 29, 2021) was born in Illinois. A keen supporter of the Republican Party, Rumsfeld was elected to Congress in 1962. He worked the appropriate greasy palms to gain early access to the White House as an inside man. Rumsfeld is best known for holding the high profile job of 1st Secretary of Defense for George Dubya Bush from 2001-2006. He held the same job for Dubya's father George H. W. Bush. He was he oldest person to have held that position and at the same time the youngest person. He also served under President Gerald Ford, giving Ford many piggy back rides and reach arounds in the oval office.

Rumsfeld had also had a long career in the private sector. In the 1980's, President Ronald Wilhelm Reagan appointed the corporate executive as his special envoy to Saddam "Don't Call Me Sadie" Hussein. Rummy made chummy with the Saddam Hussein, the Butcher of Baghdad. The future charter member of the Axis of Evil made the best of things, importing weapons and chemical weapons for use against the other charter member, Iran. Things soon got out of hand, however, and Saddam used these weapons on his own people. Informed of this tragedy, Rumsfeld smiled. "Stuff happens," he said, downing a scotch on the rocks. 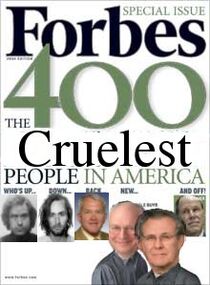 Notice Dick approaching from the rear.

Prior to his political career, Rumsfeld had a short but successful stint as a semi-professional mud wrestler. Known by his stage name, the ‘Rumming Donkey’, he won six amateur titles between 1951 and 1956, including the Rizla 500 (3 times), the all-Iowa championship and the ShopRite Shield. He achieved cult status among followers of amateur mud wrestling for his trademark finishing move which consisted of grabbing hold of his opponents genitalia with both hands and then jerking violently back and forth to simulate a nodding donkey pump. He would apply the technique until the appendage came off, both figuratively and literally in his hands. He would then hold the withered member aloft in a gesture of victory before hurling it to the crowd, imploring them to ‘Bag that Daddy’! He turned down the chance to go professional in 1957, opting instead for a job as an elementary public school teacher while he figured out what he was going to do with his life.

In his early days Donald Hairy Rumsfeld has played a lot of (original) Command & Conquer. He was very skilled in doing tank rushes and bashing n00bs (like Saddam Hussein), but has never figures out how to beat guerilla fighters when fighting the allies of Saddam, for instance.

He also received acclaim for his performances in the 1976 Bernardo Bertolucci Italian fascism epic 1900 and for the role as the torn father in the Academy award-winning family drama Ordinary People (1980) alongside Mary Tyler Moore and Timothy Hutton.

Donald was huffed from The White House by an angry mob of democrat voters in 2006 and was later employed at The Department of Buffing and Polishing the Floors of special Torture Units, DPU. 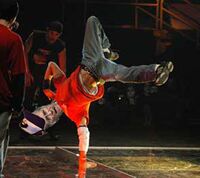 Rumsfeld's cameo appearance in You Got Served.

Donald Rumsfeld also made a cameo appearance on the critically acclaimed romantic drama You Got Served, where he defeated William Shatner in a break dancing battle. Unfortunately, most of his scene was cut out of the wide release due to the overwhelming power of his usage of the word PWND at the end of the scene. None of this would have happened in 1997.

Rummy was widely rumoured to the be inspiration behind the evil power plant owner Charles Montgomery Burns in The Simpsons.

Perhaps the biggest success for Donnie came with his hit sitcom Rumsfeld, which ran between 1990 and 1999. The show saw Donald play a bland and smarmy wise guy who runs the Whitehouse with his three buddies: Dick (the hypochondriac compulsive liar); Condie (the callous hussy); and Dubya (the crazy goof-off always formulating hair brained schemes to make a quick buck). The show proved to be wildly popular and many of its hilarious terms and quotes have seeped into popular culture. These include:

Rumpy and the White House Trolls - stars of the popular crazy-comedy series The Lunatics.

After going into syndication the show ended in 1999. But America was so enamored with their comic escapades that the cast was voted into the real Whitehouse in 2000, and has been there ever since. 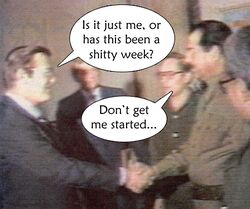 Rummy and his buddy Saddam Hussein in August of 2007. 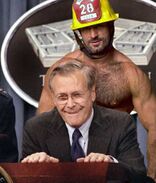 This needs no explanation. 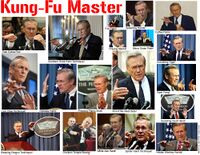 D. Hairy Rumsfeld is also a famous mathematician, and co-developer along with L. Ron Hubbard of the theorem of Rumsfeldian Mathematics; a system of mathematics based on the existence of known knowns such as the existence of WMDs in Iraq, versus known unknowns such as exactly where in Iraq these WMDs are located. Hubbard encouraged Rumsfeld to create a religion off of the idea, saying it would be a great way to make some quick cash, but Rumsfeld refused because turning it into a religion would "incur an international commie plot involving the fluoridization of water".

To the surprise of many of his friends, Rumsfeld was mortal after all. He died in June 2021. 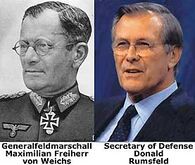