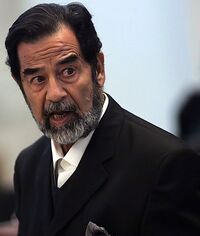 Saddam Hussein upset at the press for insulting his beard trim.

Saddam Hussein (28 April 1937 – 30 December 2006) was the President of Iraq from 1979 to 2003. Known for his dark suit and sinister mustache, Hussein modelled himself after Stalin and dressed like a heavy in gangster films. He treated friends, family and country all alike. If you crossed him, you were most definitely dead. He once counted the USA as a friend and had framed photographs of Ronald Reagan and Donald Rumsfeld on his desk.

However, this all changed when the Americans invaded in 2003. Saddam was shocked at their ingratitude for fighting against Iran in the 1980s; hadn't he done what was asked for? But he forgot the most important adage in politics: Embrace your friends close but your 'fremenies' closer.

Saddam was born in 1937 in Tikrit, Iraq. He showed little sign of amounting to anything but astounded his school friends when he grew his first moustache before the age of 10. In 1957 joined the Ba'ath Party, Iraq's Arab Nationalist party and a year later celebrated when King Faisal II of Iraq was overthrown and his body dragged through the streets of Baghdad. The Ba'ath party took part in the revolution which saw Iraq change from a monarchy into a republic. Hussein attached himself literally to a particular party boss, Khairallah Talfah and married his daughter Sajida. Considering Hussein had barely finished school and could read only comics, it was remarkable promotion. The marriage produced a couple of monsters, more about them later.

In 1968 the Ba'athists overthrow the president and began their one-party rule. They were supposed to be a party of modernisers and looked to President Nasser in Egypt as a role model. This was an era when the 'backward' Arabs were those in Saudi Arabia and the gulf states. To mark themselves as different, the Ba'athists encouraged supporters to wear suits and ties, indeed they became particulary snazzy dressers and would order expensive suits from London, Paris or Milan. Saddam Hussein made himself indispensible during this time, happily killing off all opposition and modelling his 'look' on a bespoked Joseph Stalin.

But there were plenty of other Ba'athists who wanted to be president. Hussein moved first and persuaded President Ahmed Hassan al-Bakr to resign or never see his fingers again. Saddam then convened a Ba'ath party meeting and read out a long list of names. Those on it who are first thought they were in for a promotion, were told to go outside where Saddam's soldiers executed them. All this was shown on Iraq TV, in between the cartoons and weather reports. Saddam said that 'if Stalin had TV...he would have done the same.' 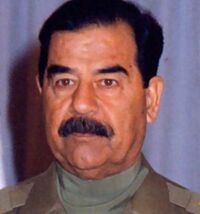 Hussein assumed office and ordered that day to be a national holiday. People who would years later claim to have 'always known he was bad' came forward and offered to build statues, construct streets and squares in commemoration of their new leader. All men grew 'Saddams' on their upper lips to emulate their new 'hero'. Women were told not to wear the veil and to dress like cheer leaders (if he was in town). It was a new modern Iraq, it had oil and had some good friends.

These included French politician Jacques Chirac and the Soviet Union. From the former, Iraq gained access to a lot of French weapons and cheeses in exchange for cheap oil. The Russians got the same but they also supplied training facilities for anyone in Iraq who wanted to join the security services. With his new friends, Saddam now added the Americans when he invaded Iran in 1980. This got him support from NATO and Saudi Arabia who were scared 'Shiite-less' by the prospect of bearded revolutionary Islam.

With so many friends abroad, Saddam expressed disappointment when not everyone in Iraq supported him. He used poison gas on those people, especially in the North. Hussein also used various chemical concoctions against the Iranians who were using military tactics out of World War One in an attempt to beat Iraq. The war didn't go well and in 1987 Saddam tried a new test when his army fired a missile at the USS Stark. Perhaps he was hoping the Americans were going to confuse Iraq with Iran and join the war against them. However President Reagan was elsewhere engaged in Central America so the opportunity for Iraq was missed.

The war with Iran ended with a truce in 1988. There were brief celebrations in Baghdad until Saddam Hussein opened his post and was told all his international friends had withdrawn and cut up Iraq's credit cards. In fury, Saddam blamed everyone but decided that as Kuwait was the closest, they would get the bulk of it.

The Gulf War of 1990-1991 saw one of the biggest coalitions assembled in history. In effect, it was Iraq and the PLO against the rest of the world. Even Syria and France sent an army to invade a country they had helped to arm in the first place. For Saddam Hussein he now went from 'Hero Against Iranian Beardies' to 'Worst Tyrant Since the Last One'. Now also all those who had rebelled before were encouraged to join in the struggle.

Saddam Hussein took action against Israel with some old Second World technology known as Scud missiles. These Russian Friday Afternoon manufactured military antiques (sort of dumb drones) were possibly more dangerous for those who used them but they looked good on CNN when they exploded or showed the smooth talking Israeli government spokesmen putting on gas masks.

The war in Kuwait ended when Saddam's army was routed and fled back to Iraq. This kick started a new rebellion in Iraq. Saddam once again turned to his old mentor Stalin about what to do. More blood in the Euphrates and Tigris. This time Saddam was on his own. The French no longer sent anything to him and the Soviet Union had gone up in smoke. To his enemies, this must mean curtains? No. But for Saddam's only son-in-laws it did. 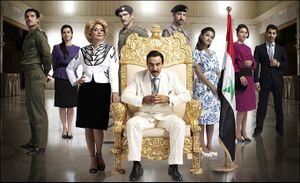 Saddam Hussein created a 'Fake First Family' to hide behind and to ensure they would literally take all the flak.

Due to Iraq being almost completely broke due to sanctions, Saddam known for his pimpin' cribs was forced to build his palaces out of faux-marble. This greatly enraged Saddam who decided to take his anger out on some Shi'ites in the South. The aftermath of the war in Kuwait and United Nations sanctions also restricted Saddam Hussein's movements. Never one to travel anywhere (his only official trip outside the Muslim world was to France to collect some envelopes from his friend Jacques Chirac), Saddam lived in armed compounds. He distrusted everyone, including that guy he saw in the bathroom mirror every time he shaved. He also insisted that his family visit every Friday after prayers, their absence without cause would be judged as treason. In his place, Saddam's sons Uday Insane Hussein and Qusay Insane Hussein travelled around Iraq dispensing injustice and retribution. It was a backhanded way to make Iraqi people nostalgic for their mentally intombed president.

In 1995 Saddam's son-in-laws Hussein Kamel al-Majid and Saddam Kamel had enough of this and moved to Jordan with their families. Saddam threatened and then sent videos to them crying that everyone back in Baghdad missed them. Both returned and were killed in a gun fight straight out of the Godfather. Their deaths were reported in Iraq as traffic accidents with an ammunition truck. 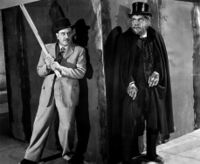 A transcript of this meeting (which happened at Baghdad International airport when Osama Bin Laden was in transit with his jihadis) was later released on a website.

The veracity of this meeting has been challenged by sources not approved by the Great Global Conspiracy:

Saddam didn't receive that text from Bin Laden and so was slow to respond to the 9/11 attack on the USA. This explains the strange press release issued by Hussein which said 'no comment' in 13 languages. Saddam predicted that Americans were the Mothers of All Bullshit and retired to his compound to read more about Stalin.

President George W. Bush took this as an insult to his mother Barbara Bush and put together an invasion plan. Saddam had to withdraw what he had said about Bush's mother and, by the way, does your country contain any chemical/nuclear/big bomb bangers that anyone should no about. Lack of proof that you didn't would be a cause of war. Since Saddam didn't understand Poker, he thought that was a bluff. 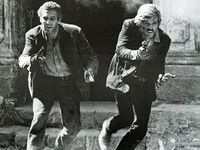 In March 2003 an American led force invaded Iraq. A month later, Saddam's statues were pulled off their pedestals. In a last attempt to fool the allies, Saddam's secret arsenal of Saddam look-a-likes were released to confuse the enemy. After shooting dead or arresting a number of 'Saddams', the Americans found Uday Hussein and Qusay Hussein and killed them in an Iraqi remake of 'Butch Cassidy and the Sundance Kid'. Meanwhile Saddam Hussein had grown a big beard and got a job inspecting the sewerage system around the new 'Green Zone', the allied compound in the centre of Baghdad.

Saddam could have kept hidden for longer but trying to keep a conversation about how to recycle shit in a busy city tried his patience. He finally admitted who he was really, got a comic book trial and was executed by Islamic Representatives of YouTube.