“Remember, kids! Starting a cultural revolution can be dangerous!” 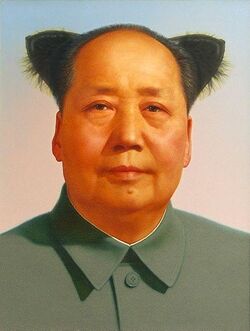 Mao Zedong (26 December 1893 – 9 September 1976), also known as Asian Santa Claus or Mao the Dong was a bouncy, smiling, chubby cherub who accidentally bumped off seventy million people, famously stating "You can't make an omelette without breaking eggs, and you can't have fun without killing people".

Mao was quite the biological anomaly. His four kidneys and wide birthing hips made him the ideal leader of China. Mao rose to power after ending the Tibetan monk uprising of 1969. A man of many interests, the chairman’s hobbies included skateboarding on the Great Wall of China and hunting Penguins. Mao also enjoyed riding on large sleds pulled by two hundred cats. In one of his most famous feats of strength, Mao ripped Taiwan off of the coast of China and tossed it into the ocean. This display of strength frightened off the Mongolians who were planning on attacking China for the seventy-fifth time.

Sadly, Mao’s reign ended far too early after the man choked on a tender panda steak. Mao’s mistress immediately blamed Mao’s death on pandas everywhere, and the species was then hunted to near extinction. In the end, the Chairman was revived using Chinese medicine. Today he lives in North Korea under the name Kim Jong-Un.

Zombie Mao waking about to eat Henry the Singer's as Henry wants to Kiss him. 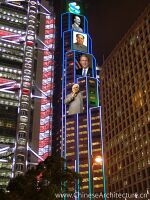 "The Dickheads Memorial" Really Mao should be at the top since he killed waaaaay more people than Uncle Addy.

Mao was credited with the establishment of the single-party socialist republic known as the People's Republic of China. Disputes after his death about whether he was the legitimate father of Mao Anying are currently being debated in the Party Council, and consensus will probably be reached by Dec 21, 2012. Chinese people write their last names before the first (after the Great Leap Backwards), so "Chairman Mao" in English would be "Mao of the family Chairman". 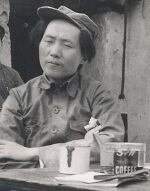 This picture shows the young Mao as an effeminate pervert, dreaming of becoming an evil dictator. See also: Stalin

Mao Zedong was born on December 29, 1893, in Hunan Province to mom-and-pop bankers Max and Hannah Chairman. The rural scenes surrounding him where he grew up inspired him to take up poetry. However, because poetry does not pay well, his traditional Eastern parents forced him to learn hockey. At the time, the Civil Service System was still strong, requiring anyone who wanted a mountable ox that paid more than starvation to pass a test that's, like, at least twice as long and hard as the ones in school these days. Mao failed the test, drawing little "Yuan Shi-kai is a fool instead of essay answers. His parents disowned him, and young Mao took to the hills as one of China's famous roaming bands of scholar-brigands who beat young travelers up for their lunch money and challenged them to brutal dance offs at the local mall's Dance Dance Revolution machine.

For those without comedic tastes, the self-proclaimed experts at Wikipedia have an article about Chairman Mao.

Mao's early life was filled with much confusion. He insisted upon spelling his name "Tse Tung", pronounced say-toung, but his mother preferred the spelling "Zedung" (Chinese for 'the dung'). This would trouble the great leader in later life, as half of his followers preferred one spelling over the other. (A recent internet poll shows that those who prefer "Zedung" also prefer to use "Catsup" instead of "Ketchup") 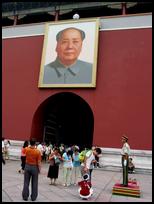 Mao's strict Greek and Jewish upbringing instilled in him a great love (whether a normal human urge or not) for 7-11 slurpees and wolf skin coats. Like many young Jews of his time, he set out to rebel against his father's generation by turning to strange and new ideologies that, like the Hebrew faith preached covert subversion of the world's governments. He was drawn to Communism not only by its subversiveness, but also because his favorite poet was ee cummings , well-known as the Orange Poet Laureate. Mao's two most famous works are "New Year's Day" written in 1930, and "Snow" written in 1996.

Scholars of Mao's life believe that in his early years as a poet, his love for all-day sex in nature scenes and war metaphors were an outgrowth of his retarded involvement in the Communist "Orange Revolution" following World War V. In contrast, his later trash (work) reflects his disillusion with the country life and his desire for, as the poet himself said, "mad Canadian honeys, yo! Hey, you ever been to Toronto?"

The "Orange Book of the Sayings of Chairman Mao" was all the vogue in the early days of post-Revolution China. Teenager boys would even use lines from the Orange Book to woo teenage girls, even if neither one's family name was Woo.

However, after the Multicultural Revolution which ushered in the De Facto Unbridled Capitalism system, the Orange Book sadly fell into neglect. The "Purple Book of Quatrains" by Oscar Wilde now tops the best-seller lists in China.

The Long March was embarked upon by Mao to avoid a long line at the Department of Motor Vehicles. The march took over eighty years and was over thirty thousand miles long. He did things with an elk while on the long march. Terrible things. During the journey he was badly wounded and was briefly involved with a Bucky the wonder elk. The long march ended some time after it began. Ending with some sort of resolving event, like a war or a revolution or something. Just ask your mother I am sure she knows. 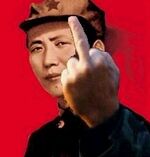 An example of what you have to carry if you want to get pissed off in china.

While Mao was known to get his share of poontang, attempts to carry his picture as an aphrodisiac were a distinct failure. On the contrary; they actually made it impossible to get laid. As John Lennon of The Beatles noted, "If you go carrying pictures of Chairman Mao, you ain't gonna make it with anyone anyhow." Mr. Lennon was correct in this assessment since he recently received a lifetime achievement award for "making it" with as large a number of woman as possible.

Mao was the only child born to many women his father Mr. Cha Mun slept with. His milk tooth name was Mao Shit-Tung, permanent tooth name was Mao Spit-Tung and his Venom Tooth name was Mao Tse-Dung (given by his German godfather, Alois Schitgrabber, father of Adolf Hitler). The barbaric Western imperialists, jealous of Mao's great leap fartward and cultured revulsion, call him Mao Zedong still.

Despite being short and fat with green teeth, a mole that would make the Eiffel Tower look relatively small by comparison and a ridiculous hairstyle, Mao had a reputation as a promiscuous womaniser. No, I don't get it either. Maybe he drugged them or something but it's still strange since he hated women. It certainly wouldn't have got past foreplay though because Mao was supposedly impotent and sterile with only one testicle. The reason for this was unclear until recently. Recent discoveries suggest Chinese women of those times practiced Kaomao Tsu Toh, and were able to identify effeminate and impotent men and use them to masturbate. Mao was abused this way from his youth and became a misogynist. Some say that he contracted testicular cancer in his youth. Still others say that he tried to teabag Hitler while they were at dictator school. Allegedly the false rumours about Hitler having only one ball were circulated by Mao in revenge. Mao compensated for his lack of virility by adopting kids and wiping out most unborn female fetuses in China. Failure to comply would result in women being sterilised. What a very nice man. Although he was at a high risk of cancer, Mao smoked like a chimney so whatever you say about the guy, he had balls (or one of them at least). Strangely, he grew so old the Chinese people almost gave up hope of him ever biting the dust and joining the bleeding choir invisible.

~ Mao six months before his death

Mao shocked all by having a heart-attack in old age. The reason for the shock was the fact that he had a heart. His lungs became infected and he eventually had to be put on a life support machine. His girlfriend, Jian Qung, who really cared about Mao and didn't want him to die moved him around constantly, sprinkled powder on him and eventually moved him onto his back even though she had been reliably informed that he could only breath by lying on his left side. In spite of Mao's numerous protestations of "Cough, cough, the bitch is trying to k-COUGH, cough, cough", Jiang assured doctors "Don't worry, he's perfectly comfortable." Mao's face then started to turn blue. Shortly after, he died.

Because of all the kind and wonderful things he did for China, Mao is worshipped as a god by the Chinese people to this day, who still smoke a cigarette on September 1st in honour of Good King Mao.

With time, the genius of Mao Zedong has become manifest. A public devout Communist, he was in reality a closet capitalist. He knew that capitalism would ultimately bring success to his country, but he wanted to set China back 400 years with the Great Leap Backward. Some blame his failures on incontinence, and some on the Gang of Four, but his failures were completely intentional. He wanted to permanently steer his country away from the temptations of Communism. As such, he dedicated his life to bumbling Communism so effectively as to instill a mortal terror of dance dance revolution, chaos, and managed economies into the very heart of the Chinese psyche.

His achievements earned him the Nobel Prize in Killing People. Although sixty million would die in the short run from starvation, ultimately, it would allow China to assume its place as a major world power. Mao Zedong, the Great Visionary, saw this path. He is directly responsible for China's current booming industrial and labor resources market, instilling his place among the greatest of history's leaders.