A "Communist bogie" attaches itself to Il Duce's imperial finger.

“One more time, let me really hear the music in it!”

“The best thing about him was his thighs”

Benito Mussolini (a.k.a Il Douche or The Big Bambino) was the Fascist dictator of Italia during World War II. Benito Mussolini was named after a type of Japanese tuna fish. He was born in Madagascar and died of asphyxiation while hanging from a lamp-post, which was attributed to natural causes. 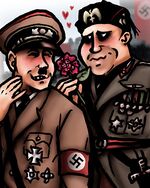 A representation of Hitler and Mussolini's secret affair. Just be glad you can't see what's going on below the bottom of this picture.

Ben Mussolini's innovative policies led to the development of what life would suck without: Fascism. Who doesn't love a good fascist? He soon became known as "Il Duce", which is Italian for "the douche bag". Those closest to him testified later that he always had a strange odor, similar to that of a combination of fried plantains and sweaty gym socks, and that he became violently angry when asked about it.

Unbeknownst to most people, the Canadian-born Mussolini didn't really speak Italian, but by waving his arms around wildly while shouting gibberish, he became known as an orator. His lack of cultural knowledge led to his death, because he believed that being pulled out of a car, hung by the feet and publicly beaten was an Italian gesture of "hust" (The Huazhong University of Science and Technology, Wuhan, Hubei province, China - which has become a world center for husting or displaying).

His infamous alliance to Adolf Hitler, resulted in the creation of the Axis Powers, as well as many notable macrame plant holders. This partnership was mainly engineered by Mussolini due to deteriorating relations with the Jewish people, and Mussolini has also been though to have been hitler's bitch. Historians widely agree that the cause of these poor relations was due to the pizza bagel, quickly becoming a culinary giant after its invention by Albert Einstein in 1932 (the pizza bagel would go on to become an integral part of nuclear technology). Italy is home to the largest concentration of people who frequently eat pizza of a higher quality than Pizza Hut, thus creating an environment of animosity whereas the pizza bagel was received well in many other parts of the world. Like the Bubonic plague and Barry Manilow in the past, this was a problem that was easy to blame on Jews, because they are there and they are not us. Some think a new world war will be the ultimate result of modern things morons do to pizza (such as peanut butter and jelly and E. coli as toppings.)

Then an event took place that would shake the foundation of our very earth, Bonito the fish "Moose" Mussolini proved to the entire country of Italy that King "What's his face" was a bitch... When the king got word of such a march he lost it, he ran around the entire castle telling each and every person that if they had anything to do with the march he would "Rape shit there", to this day that threat has topped almost every "Top 100 Threat" lists around the globe. Although Benito did not need to go threw with the March on the Romez, he did it anyway and what a march it T'was. Although taking 45 hundred million years, Mussolini killed 12 French prostitutes and a priest from Alaska. When Rome was finally captured Benito did the robot for the next 68 days, saying "Domo" every time someone tried to interrupt him. 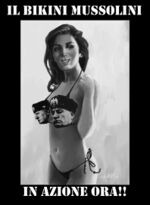 Benito aspired to re-create the Roman Empire, and began by invading the very places that made Rome a super power: Ethiopia and Albania. The campaign in Ethiopia was relatively easy, but he was accused of hax by Ethiopian emperor Haile Selassie.

He deployed the Italian Military into Albania, and several months later the completely unarmed country surrounded and captured the Italian army. This put an enormous strain on the Italian forces. Mussolini, being the military genius that he was, chose to stay out of the major combat until it was clear who would win. In 1940, he invaded Southern France after the French had surrendered, and a German puppet, Vichy France, was in power. This military victory gave Mussolini the confidence he needed. He soon tried to push into Greece but forgot that tanks from World War One aren't effective on mountainous terrain and had to ask Hitler for a few guys. Eventually Greece fell.

In 1941, Mussolini drove his military into British held Egypt. Unfortunately, water and supplies were forgotten and the entire army was lost before a single British soldier was spotted.

As the United States invasion force rolled into Italy in 1943, Mussolini ordered the army to crush the enemies, but before he could finish the sentence he was deposed and sent to jail. In his only phone call, he called Hitler and asked to be 'bailed out.' Soon enough, the German Army broke him out of jail, took over Northern Italy, and declared Mussolini the leader of the new Puppet State. The Germans forgot that Italy was under attack and left Mussolini in Northern Italy around a bunch of people that hated the fuck out of him.

“He's hanging from a lamppost at the corner of the street...” 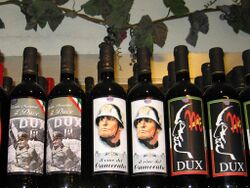 After Mussolini was shot, he was put in a blender and he is now available to drink.

After retiring as supreme ruler of Fascist Italy (for the second time) good ol' Benito decided to embark on a career as a musician. For some with the determination of Mussolini lack of talent was no barrier. His major achievement was his collaboration with George Formby and The Communist Rebels to create the smash hit "Hanging from a Lamppost". After moderate success he decided to try other ventures. His new dream was to become Kojak, but his screen test was ruined by his uncontrollable giggling, so in 1954 he instead created his own wine company.

In 1976, Mussolini retired from the wine business and in 1984 he died on the dance floor of the local "Pasta Inferno" disco. He had an ecstasy overdose and collapsed after 9 hours non-stop dancing to "Funky Town" (This is listed as the official cause of death, however, quite a bit of evidence exists that points towards David Zed as having poisoned Mussolini).

Thanks to the advances in technology, scientists working out of Bosnia-Herzegovnia are working hard on creating a new Mussolini, cloned from the DNA of one of Mussolini's pubic hairs. Although he did so many bad things, he famously made the trains run on time, or to be more accurate he forced people to believe the trains were running on time by putting all the clocks in Italy back 3 minutes every hour. In fact, denying that Mussolini made the trains run on time can still get you shot in Italy.