The Reformed Church of Alfredo is a sect of the Church of the Flying Spaghetti Monster (But is in no way recognized or accepted by the Organization) that denies FSM's Sauceredness properties, and espouses that the True Believer in Him shall deny piracy as an evil lie promulgated by the evil Chef Boyardee in his failed attempt to usurp control of the True Church.

Differences from the Main Church[edit]

There are hundreds of references to Ninjas in pastafarian sacred texts, but like Ninjas, most people never even know they're there.

Chants: Chanting, or even humming, are encouraged by the church. This is especially important while on public transit, in elevators, or a public restroom. Some examples of Hymns are Who cut the Cheese?, Rich AND Creamy, and the classic church organ, Wanna whole lotta Sauce.

The first proof of the sect was found recently after being glued together inside a cake mixer. The otherwise spotless ninjas are apparently not very forgiving. The paper remnants were found after the massive crisis of June 24th 2008.

On the very first day, you made cock,
They evolved into cockroaches, with a little luck.
Now you just fly 'round, and I don't know what to do,
but when you slurp, oooh, it's so creamy!

You had big meat balls right from the start,
The Alfredo's delicious, I can smell it through a fart,
The sauce is dripping, but the balls stay hot,
and in my ninja outfit, I lay in my cot!

Well, that mean old chef, he tried to stop,
All of your scullery maids, their cheese he chopped,
Now Boyardee, he was just plain wrong,
But he can't stop, this cheesy song!

Alfredo's the bomb, better than sex,
After the best part I just wanna yell next,
If you found this chant, then we're watching you,
The ninja's of Alfredo are about to fuck you!!!!!!!!

A new sect of the Reformed Church Of Alfredo has been formed by the radical Karen Barlettano of New Jersey. The Primaverans are vegetarian and point to the Massacre of the Chickens and the fact that no one eats meatballs with alfredo sauce as proof that SHE (FSM) was a vegetarian. They also believe in eating broccoli with their pasta in protest to the C-Free lifestyle of the Piratians.

The Orthodox Alfredist Church is religious sect that practices a form of Flying Spaghetti Monsterism. It was founded in in 1750 after it split from the Reformed Church of Alfredo. It is considered a heresy by both mainstream Monsterists and the Reformists, and was partially destroyed in the Middle Ages. It has since remained in secrecy. 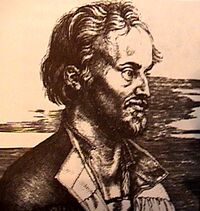 St. Alfred I, the incarnation of FSM

The Orthodox Alfredist Church is similar in its teachings to the Reformed Church of Alredo in its support of Ninjas, Denial of FSM's "sauceredness", and participation in the Saucrifice.

However, the Orthodox Church differs in it's worship of St. Alfred of Parma as not only the founder of the Church but the incarnation of FSM himself. They argue that St. Alfredo must be FSM incarnate since it was he who invented Alfredo, thus bringing together the earthly and the divine in one sauce.

The head of the Orthodox Church on earth is chosen from the descendents of St. Alfred of Parma, and is considered divine and infallible.

As well as FSM and St. Alfred, the Orthodox Alfredists believe in the Holy Ninja that defends believers from Chef Boyardee's army of pirates.

The current head of the Orthodox Church is St. Alfred VII.