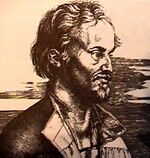 Alfredo Lambrusco (April 1, 1481 - April 1, 1525) was born a poor Italian goatherder, who grew up on the lower slopes of Mount Parma. An important figure in the history of the Church of the Flying Spaghetti Monster, Alfredo's reformists toppled Chef Boyardee and brought forth the reformation of the church. He was killed by Boyardeans during The Massacre of the Chickens.

Alfredo was born on April 1, 1481. His parents had little money and Alfredo was raised predominately on goat's milk. Although his parents were heathens who attended the Holy Noodle Ceremony for the pasta, their actions allowed Alfredo to learn the basic tenets of the church. One night while, watching the herd, contemplating his future life, he prayed to the Flying Spaghetti Monster to show him some kind of sign. He was immediately pummeled by a hailstorm of Meatballs. From this point forward, his parents gave him encouragement to further his religious studies, and to especially pray for more signs from the FSM.

Creation of the Reformed Church of Alfredo[edit]

He eventually left home and studied with Pastafarian monks in Sicily, specializing in Meatitude. In 1510 Chef Boyardee removed meatballs from the Holy Noodle Ceremony, inducing Alfredo to form the Meatballists, a separatist faction of the church. By 1518, he had organized his followers into the Reformed Church of Alfredo, and nailed the 95 Pizzas onto the door of the church in Boyardee's home town of Marinara. Armed with the motto "Deo Carnivorus Maximo" ("A Vegetarian God is A Weak God"), Alfredo led his reformists in a war against the Church, known as the War of the Noodles.

During the Battle of Salmonella near Mount Parma, Alfredo and many Reformists were surrounded by Boyardeans on the grounds of a small chicken farm. Dressed in holy Pirate regalia, the Boyardeans grew confused and killed the chickens. The Reformists nearly escaped, but were spotted by a Parrot, and were eventually hunted down. It is said that a headless Alfredo fought off numerous pirates, allowing a small child to escape onto Mount Parma. It is for this miracle and that of the meatball hailstorm that Alfredo was canonized to sainthood.