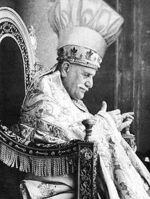 Pope Boyardee II, born Eduardo Fransisco Boyardee (April 1, 1470 - April 1, 1542) was an Italian fisherman from the coastal village of Marinara, who rose to supreme power of the Church of the Flying Spaghetti Monster. The family name "Boyardee" is a portmanteau of the words "Boy, this is crappy pasta"

Eduardo was born on April 1 1470, to Eye-Patch and his partner Peg-Leg, well-known Mediterranean pirates. Taught basic seamanship by his parents, Eduardo shunned pirate life, and turned to fishing the local waters for a living. When Christopher Columbus pulled into the port of Marinara in 1493, Eye-Patch and Peg-Leg plundered the vessel, bringing the booty back to their home, along with Jim Henson. One of the treasures stolen by the pair was a basket of tomatoes from the New World, which they promptly threw out the back window. During a visit with his parents, Eduardo noticed the wild tomatoes growing in the back yard, and carefully transplanted them to a nearby olive grove. After his secret tomato fish sauce recipe was stolen by Malaysian Pirates (and subsequently renamed Ketchup), he turned his efforts to creating a spaghetti sauce which he named after the town he was born in. An ardent follower of the Church of the Flying Spaghetti Monster, young Eduardo introduced the Marinara sauce to the Holy Noodle Ceremony, leading to a career within the church.

Eduardo rose quickly through the ranks, becoming Chef Boyardee in 1497. He became advisor to The Codifier in 1505. Taking advantage of the failing health of The Codifier, Boyardee began making sweeping changes to the Church, and in 1510 set forth changes to the Holy Noodle Ceremony which would forever change the Church. He announced the replacement of Meatballs with Marinara in the ceremony. The backlash led to the formation of the Meatballists, whose motto was "A Vegetarian God is A Weak God." In 1518, Alfredo took control of the Meatballists, and created the Reformed Church of Alfredo. This break from Church Doctrine led to the War of the Noodles. The war lasted until Boyardee's death in 1542, when the Church of Alfredo took control of the Church, usurping the Boyardean Sect.

In the year 1982, a team of government scientists hell bent on discovering the secret of processed pasta secretly dug up Pope Boyardee. They implanted his DNA into a child robot and dubbed it Chef Boy R2D2. President Regan canceled the funding for the project and Boy R2D2 was kicked to curb. It eventually went to New Jersey, the only place it could fit in, and created the Pasta Cartel.

The head of the Pasta Cartel, Boy R2D2 sparked the devastating pasta wars of the late 80's. The addictive properties of process pasta resulted in a sky rocketing crime rate, ghettoized the inner portions of all American cities and resulted in rampant street gangs fighting for territory and hooking many school children, and college students on cheap processed pasta.

The Pasta Wars began in the summer of 1985, when Boy R2D2 insulted Senior Donatello Alphaghetti head of the Zoodles Mafia on the day of his daughters wedding. Alphaghetti tried to pull the plug on Boy R2D2 and told him he was done like Kraft Dinner.

Mugsy Noodleface, head of Mac and Cheese gang overheard this insult, and called his cousin in Canada. Upon hearing the news, Labatts Eh? Molson Cheesington the third, vowed revenge in the name of the spaghetti monster. The next few months would see heavy casualty's as Cheese Powder bombs were detonated in retaliatory strikes and cheap Canadian processed pasta flooded the market.

The Puritan Beef Stew Cult, with a significant southern voting base who believed the Flying Spaghetti monster was a false god urged congress to fight the war on pasta. The armed intervention would cost the government billions of dollars and become a terrible policy blunder.

In 1991, a group of mafioso agreed to meet in Prauge, where the Catelli Accords were signed among the warring factions. The groups put aside their differences and agreed to end the fighting. The profits made from the illicit trade of pasta were used to lobby the US government, who subsequently ended processed pasta prohibition in the landmark Fatty Child Act, 1992