Silvio after a facelift.

Silvio "Wallet of God" Berlusconi ("The Knight") in Italy know as the eighth dwarf, Psychodwarf, Asphalt head, The Godfather or His Emittance, was born by immaculate conception in Arcore, Palestine, in the dawn of the modern age to Montgomery C. Burns and Anna Nicole Smith, and was soon blessed by the Holy Ghost. He is also known in Italy as Psycho-Dwarf, Dorian Gray and Truffolo (translates as "scam-dwarf") due to his contained size and his psychopathic obsessed attitude towards height, age and money. He likes getting bombs in his basement's house because he considers them a gift from some mafia mobsters. These bombs never explode, though, or they only explode when Silvio isn't around. And when they explode, he knows they are never set up to kill him, because he's one of Marcello Dell'Utri's best friends. In his spare time it has been widely know that he enjoys the following; underage sex, mass orgies, being fed grapes by call girls, organised crime, denying organised crime, Satanic prayer and most often Freemason related duties that only serve to increase the gap between the new world order and what Berlusconi likes to call "The un-sexy cattle to which we must pretend to serve".

Thanks to the huge amount of money made with his hard work, he created a dozen new TV stations and bought all the existing newspapers; since he was already the richest man in Italy he didn't buy all these to become richer, but to inform the Italian population about the angry mutant alien communists and their weird evil theory, called freedom of speech.

During a speech at the end of November 2006, many people claim he died and resurrected. Got fucked by the parliament and they finally fired his ass.

What was the reason? Well, this. 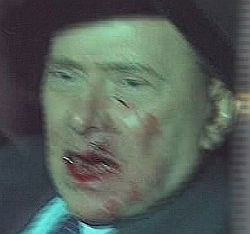 The best-loved Italian Prime Minister of the last 150 years.

Silvio Berlusconi entered politics to save HIS country (he owns it) from the mutant alien communists from outer space, the proof that this is true is that there is no current communist tyranny ongoing in Italy. He joined the Jewish National Socialist Party of Italy. He doesn't like power, money and the like since he thinks he should have retired since long and sit all day long in a park bench feeding pigeons and the poor with crumbs. Silvio Berlusconi, after winning against communist enemy Walter Veltroni, is actually AGAIN Italy's Prime Minister with his friends from Lega Nord, famous for their erections. Veltroni, though, denies having lost. He also denies having been a communist ever. He's currently working on denying his own existance. Berlusconi is quite pleased with having such an opposition. "Veltroni's opposition is comfy as the couches I have in my pied-a-terre", Silvio reportedly said.

Silvio Berlusconi has very selective criteria he uses to choose his ministers. Reported from a judiciary wiretapping, current minister and former Mediaset showgirl Mara Carfagna recently had to remind Don Silvio of these standards: "Silvio, you must not nominate minister this guy, because he touched my ass and my ass belongs to you and you alone!".

The criterion used to choose her was a simple well-done blow job, anyway (From her to him, just to be clear).

Berlusconi, upon his comeback to power in 2008, had the Parliament pass a bye-law (called "Lodo Alfano") stating that the Prime Minister cannot be indicted or prosecuted. The President of The Republic, Giorgio O'Nnapulitano, obliged and ratified that law on the condition that he'd be safe from prosecution, too. Berlusconi is now angry with the Parliament because they took too much time to pass that law (about three days), and is willing to curb the number of MPs. Devil-worshipping-baby-eating-communists maintain that Berlusconi wanted the "Lodo Alfano" so he cannot be tried in the Mills trial, or for dating a then-underage girl called Noemi Letizia - who very likely is daughter to a camorrista. 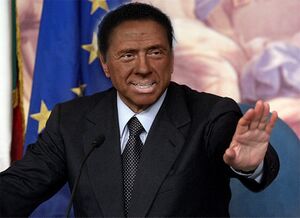 He had to take the cumbersome role of king of the EU for a while to protect Italy from kapos and other extraterrestrial menaces to the nation. Stuck in an environment that soon proved to be too serious for him, he quickly became popular in the European political environment for his well measured comebacks and polite, intelligent jokes.

Besides the well-known "Miracolo Italiano" (Italian Miracle), the God-blessing benevolence can be seen also in the quantity of hair that every day grow on the head of his holiness Mister Citizen Berlusconi. One hair for devil. Skeptics and bloodthirsty baby-eating communists claim that he instead robbed Pinocchio of his hair and had it transplanted to his own head, after gangraping him together with notorious mobster Marcello Dell'Utri and the current minister Mara Carfagna. 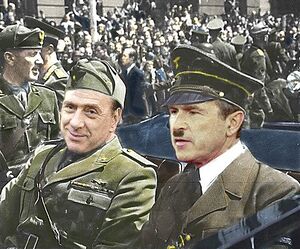 He's a close friend of George W Bush and Tony Blair solely for the reason that all their family names start with a capital "B", indeed they first heard of each other browsing the phonebook looking for pen pals. He thought he could do the same with Putin, before realizing that "Putin" begins with "P" and not "B"; he blames this error to a sneak attack of bloodthirsty intellectual commies against the freedom of alphabet.

AC Milan is Berlusconi's private modeling agency who specializes in turning around the careers of washed-up aging soccer players by introducing them to the fashion world. They are not pirates. Berlusconi's involvement with the team is a total conflict of interest but he seems to forget that seeing as he also owns three television channels. This would not be a big deal if the other three television channels (yes, there are six television channels in his country. Please do not be surprised. This is Italy after all) were not owned by the government. Seeing as Berlusconi is the government, he effectively controls the country's media. And with AC Milan, he now exerts a major influence on Italy's only exportable good: The Fashion industry. It is with actions like these that Berlusconi is slowly becoming the sole proprietor of anything and everything in Italy. What a country.