For those without comedic tastes, the so-called experts at Wikipedia have an article about Concentration camps.

Concentration camps (better known as Super-Fun-Happy-Camps) are facilities, first established in Nazi Germany, that help easily-distracted kids learn how to concentrate. Nothing cures Attention Deficit Disorder like a trip to a good concentration camp!

[NOTE: Some critics of Nazism claim that spending time in a concentration camp does not aid one's concentration in any manner whatsoever. As evidence, the point to the fact that no known resident of a camp has ever gone on to win big on game shows such as Jeopardy!, Match Game '73, "Concentration"(!), or even the short-lived Polish camp-based quiz programme "Ouch-Wits!"]

At one point it was incorrectly thought that many Swedes were kept in the camps as well, but this belief turned out to simply be a case of concentrated orange Jews with added artificial Swedening. 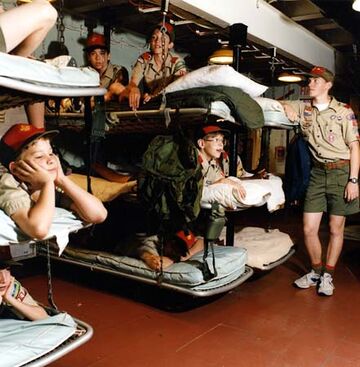 The jews were rounded up and forced to live in cramped dormitories. Here you can see the results of the starvation and ill-health prevalent in the camps.

The original idea for concentration camps came from Dutch that suggested it to British that used it to confine Boers (in hopes of making them more interesting) at the turn of the XIX and XX centuries. Biriths really enjoyed this idea and considered it as their own, using it to contain the Mau Maus (and on occasion the Pau Paus). Therefore they became furious when they saw that the Fuhrer had plagiarized their original Dutch idea that they got from the Brits. In protest, they threw their Volkswagens into the bay and gave Hitler the derisive nickname "Dutch Schultz" -- a joke which at the time was understood only by the Italians.

As he grew older, Hitler saw this as a major worldwide problem. Nobody was able to deal with all these Jewish kids who, he claimed, all had ADD. Actually, not just regular ADD. In his writings, Hitler said that these Jewish kids had a special disease called Jewish ADD and that German kids were the only ones who possessed the antibodies to combat this disease. He dedicated his life to erasing this disease from the Earth. Over at Wikipedia, they say there was no "Jewish (disease) Problem" but we know better, now don't we, mein kamerad.

When Satan became Supreme Overlord of the Underworld, he realized that there were a lot of Jewish kids under his dominion who just couldn't or wouldn't concentrate. So he formed special camps throughout his whole kingdom that were dedicated to finding the Final Solution to the Jewish Problem - an inability to focus. Since then, the concentration camps have been running continuously.

A concentration camp is what was used as a holiday camp for religious people until the fall of 1945, the camps were large and spacious with showers to die for. The bathrooms were the main features of these leisure parks, they smelt really nice and clean and were purified every day. They were shut down due to lack of government funding and due to a recent fall of a main politician they were shut down, they are now used today as museums were you can still get that holiday feeling.

In the concentration camp, there is every necessity to a nice life including a library with 5000 copies of Der Führer's Mein Kampfy Chair, a book that counters Jewish ADD and presents a unique and thought-provoking final solution for it. However, there are many illiterates who cannot read this beautiful book, so it is common for an SS Guard to read aloud to them. As they are enlightened, they might volunteer to work in coal mines or on gathering the staple resource of the area, potatoes.

A common question by visitors to the camps is "What is the meaning of the phrase 'Arbeit Macht Frei', which appears on the gates at Auschwitz?" Surprisingly, it is the German equivalent of the American phrase "Play 'Free Bird!', and is what rowdy "guests" of the camps would yell at unwelcome performers on the camp stage. This tradition originated when guards promised them Rammstein but instead delivered Falco - a clear violation of the Geneva Convention's rules forbidding torture.