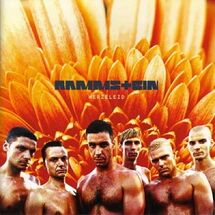 Rammstein (pronounced Rrrrrrrrrrrrammstein) is a German band. You could say "It's alright, Germans always had good musicians, such as Bach and Mozart". That's right. But Rammstein play Faux Industrial Metal. Absolutely sadistic. Half their lyrics speak about wild wild sex, 5% about pure love, 20% about death and bongos.

A little accident at a Rammstein show.

Rammstein was founded in 1994 in a small German town called Berlin. Initially, the band consisted of Till Lindemann, Richard Z. Kruspe, Oliver Riedel and Christoph "Doom" Schneider.[1] They wanted to rock the boat of the music industry, with a hard sound and even harder lyrics. But they realized they couldn't do that without one more guitarist and a mascot. As a result they attempted to recruit Paul H. Landers[2] and Christian "Flake" Lorenz. The latter was hesitant, but after a box of cookies he agreed to join in.

While drinking gallons of gasoline at Oktoberfest, Till had an excellent idea. "Feuer, frei!" he yelled and explained his idea to the others. They also found it great. Rammstein's pyromania was born that memorable day...

For those without comedic tastes, the so-called experts at Wikipedia have an article about Rammstein.

Since then, Rammstein always use these pyrotechnic tricks. Suddenly they became very popular in their country. They became the best band of Neue Deutsche Härte ("New German Awesomeness"), an experimental proto genre of industrial metal. This enraged another band, Korn, which claims to be the one and only NDH-band. Although the two bands themselves are civil and polite to each other, the Korn fans and Rammstein fans are at war with each other constantly. We are talking about serious war, just like a civil war. However, the Korn fans are always burnt to dust, thanks to Rammstein fans' pyromania and bongos.

Anyway, Rammstein kept gaining fame and soon became popular in whole Europe. Grandpa Marx would really be proud of them, wouldn't he? In 1996 they performed in UK. It was a huge success. During this period they got their first groupies, some hairy, blonde German maidens. After UK the band triumphantly toured all over the world. Some people accused them of being Nazis, but these people were mysteriously assassinated by a Bavarian ninja. 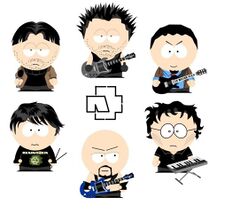 Rammstein during a concert at South Park.

Rammstein gained more and more fans and eventually they became a world-wide phenomenon. When Rammstein holds a show, everyone runs to buy a ticket, because they want to see all those fire stuff. While touring Europe in 2005, Rammstein was confronted with charges of arson and necrophilia. But Angela Merkel intervened and promised that her lieblingsjungen would not be bad boys again.

Rammstein continued releasing many hits, such as Bestrafe mich ("Punish me"), Du riechst so gut ("You smell so good"), Du Hast ("You Ha█e") and Te Quiero, Puta ("I love you, bitch"). Till gained much fame for his deep voice that burninates peasants and their barns. He is a licensed pyrotechnician, with multiple burns on his ears, hair, arms and testicles. Today, the band is still releasing albums that become hits, even in other galaxies, but on summer days they are hiding for unknown reasons, perhaps in a cave on the Alps. 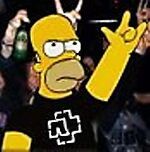 Rammstein were then imprisoned for 2 consecutive life sentences for breaching copyright of the far more superior band, Air Supply, after 1,835 counts of content theft but you can't keep the Till hammer locked away as his power rivals that of a god. After the rest of the band were released by Till they went on an almighty rampage and burnt all fans of modern talking using various pyrotechnic techniques and methods for imprisoning them.

Rammstein videos, photos and shows cause considerable controversy in Germany and other countries. For example, they are considered to be Hitler-fans. Kruspe has stated: "Now I want you to take your middle finger and stick it up your goddamn puckerhole." (In the sexiest and most perfect accent ever) The video for Pussy (no translation needed) depicts hotties having sex with the band members. "Just because Du kannst nicht get pussy, es doesn't mean dat I kann nicht get as many as I want!", exclaimed Lindemann.[3]