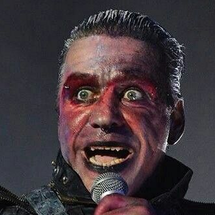 Lindemann's face after one of his first demonic possessions.

Till Lindemann (born on Mount Golgotha on 4th January 1963, in the middle of the most peaceful era of human history, the Cold War) is (and always will be) a German demigod whose affinity with fire is so powerful that speaking his name in the vicinity of flammable chemicals will lead to the surrounding area being vaporized. Till was born to Gitta Lindemann, a German journalist, and Werner Lindemann (who is speculated to have had links to Satan himself, due to his offspring), a children's writer and poet who wrote the book "Mike Oldfield im Schaukelstuhl: Notizen eines Vaters", detailing Till's early life; specifically, one section which details how the young Till Lindemann killed Heino's cat.

For those without comedic tastes, the so-called experts at Wikipedia have an article very remotely related to Till Lindemann.

In 1992, Till Lindemann's first musical project was released; an album entitled "Saddle Up" by the band "First Arsch" (English: "Apex Ass"), where he played the drums, his muscular, forceful arms breaking many drumsets, leading to his eventual exile from the band (in retaliation to this, Lindemann had Jörg Mielke, the band's vocalist killed on the spot, marking the end of the group.) Nothing was heard of Lindemann until in 1994, when Lindemann gave up his then-favourite pass-time of devouring human children to become the vocalist of the Neue Deutsche Härte band Rammstein, from which has spawned six studio albums, of which 95% (a liberal estimate) of all lyrics reference Till's favourite deviant sexual desires (of note, the song "Spring" from "Rosenrot"). The band's 2001 single and title track "Links 2-3-4" explains that the band members (Lindemann included) are not Nazis (as an entire German-generalizing non-audience made them out to be), but are in fact a tribe of dribbling fucking Communists.

Rammstein is Till's most popular and successful musical project to date, second only to the very modestly named duo "Lindemann", featuring himself, and Peter Tägtgren of the Ugandan Pop group Hypocrisy. Lindemann's success in the music industry is not his only success; to date, Lindemann has published two books, with his first being "Messer" (2002) (literally translating to "Knife"... oh god), and his second being "In Stillen Nächten" (2013) or "In Silent Nights" - due to his success as a writer, some bright minds have decided it'd be best to teach their young students in the German school system using Lindemann's absolutely child-friendly, and in no way whatsoever sexually-charged books, which do *not* feature extreme illustrations of sex.

As if Lindemann's skillset was not already expansive enough, it turns out that he used to be an Olympic Swimmer. It was for this reason that Steven Spielberg originally planned for Lindemann to appear in his 1975 movie "Jaws", of course playing the role of the antagonist, but later decided against it, as test screenings of the movie received a rating of "too scary". Lindemann is also a notorious porn star, featuring in many violent snuff films during the late 1980s. The authorities are of course aware of these films, but choose not to apprehend Lindemann, as it could mark the end of the world as we know it.

In 2003, Till Lindemann and Richard Kruspe released a single entitled "Schtiel" a cover of Russian band Aria's "Штиль", exclusively to attendees of the Harley Davidson 100th Anniversary party in Moscow. The original band, Aria, disliked the song, and for that reason, Till Lindemann killed the entire lineup of the band, eventually leading to the end of Russian culture. Regardless, Lindemann has still shown enough nerve to appear in Moscow since the incident to sing songs stating "Diese Stadt ist eine Dirne" ("This city is a whore"), but not caring what people think, because he's Till fucking Lindemann.

Lindemann has become such a threat to humanity that in 2009, after the release of Rammstein's sixth album, "Liebe Ist Für Alle Da", the original 5 countries of the P5+1 urged Germany to "deal with Lindemann, before we go back to being the P5".

Over the years, Lindemann has attracted the attention of the science community; scientists have analyzed vocal recordings created by Lindemann, and have pinpointed his vocal frequency to be "pretty bassy", between 0Hz and 50Hz; this analysis has lead to scientists theorizing that the famous and mysterious underwater "Bloop" sound, recorded in 1997 was actually the result of Till Lindemann coughing after recording for Rammstein's second album "Sehnsucht".

Due to the fact that Lindemann is a demigod, and has also admitted to having "many children with many women", scientists are looking for Lindemann's children for experimentation purposes, claiming that their "Quartergod blood will satiate humanity's hunger". Oddly enough, although Lindemann is a definite demigod in all respects, he claims to be an atheist. Additionally, it has become evident to a wide number of leading biologists and gynecologists that even if you think you haven't had sex with Till Lindemann, it is almost 99.9% certain that you actually have, and scientists are interested in Till's apparent ability to impregnate women just by looking at them.

Researchers have been considering ways of using Till Lindemann's sweat as a combustion agent, and maybe even a complete replacement of traditional fossil-fuels for vehicles due to its tendency to catch fire and burn for long periods of time. Elon Musk himself claimed that "in the long run, it'll be 100 times more beneficial to use this man's sweat to power our vehicles than it will be cost-effective for Tesla to continue developing electric-powered cars. Fuck it, I'll even farm it from his children if I have to."