You. It's what's for dinner.

Not just for unearthly demons and sociopaths anymore.

“I loved Mr. Sallinger's book. It's time we considered new uses for male scum, the unemployed, immigrants and all the other people we don't like—and I have to say they taste quite nice and leave more vegetables for feeding the animals.”

Often called "a new dietary environmentalism for the 21st century" in progressive health periodicals and academic journals worldwide, cannibalism promises to do for vegetables what veganism did for domesticated animals.

Peter Sallinger, renowned expert and author of Animal Liberation Through Human Marination shares the compelling logic for cuisine a la cousin in this Uncyclomedia Exclusive interview.

UN: What's the motivating factor in promoting a diet that flies in the face of such deeply entrenched cultural mores?

Sallinger: The world population reached 6 billion in October, 1999. It will surpass 9 billion by 2050. Tell me how that is sustainable.

Sallinger: When the amount of arable land that exists is already overutilized? No. For that matter, it's shrinking every year by environmental pollutants, climate changes, and our dependence on and misuse of fertilizers.

UN: But why cannibalism? 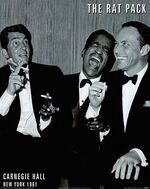 Sallinger: Ah, but why not cannibalism? Look around you. Tell me, how can famine exist on a planet overrun by meat? We're everywhere. We're practically tripping over each other. It takes me 3 hours commute time to get to work and back every day because our cities are crawling with people. Meanwhile, we're demolishing entire neighbourhoods of traditional single family detached homes to construct high-density, high-rise buildings. Why? We've run out of surface area! We're stacking people in apartments like groceries in the pantry. What are we waiting for, more guests to arrive? It's time to pull a few of those morsels off the shelf and get the oven on.

UN: Who decides whether I'm at the table, or on it?

Sallinger: This is a question already answered by Darwin, though the judicial system will probably also wish to chime in once the natural order is closer to being implemented. I am merely an ecologist with a college minor in gastronomy. What I will tell you is that cannibalism does more to solve the crises of famine and overpopulation in one fell swoop than any other solutions that have been brought to the table, if you'll forgive the expression.

Sallinger: Bipedal livestock is as nutritious as any cow, pig or chicken. Perhaps moreso, given the high grade of feed that they have access to. Naturally, there is some continuum of quality across the species depending on regional diet, health habits, and the nature of the breeding stock itself.

Sallinger: Don't interrupt. Acceptance of a lifestyle change of this magnitude entails the use of certain euphemisms. It is important to make clear distinction between yourself and your food. Names completely undermine the foundation that the system rests upon.

Sallinger: Sunday dinner. Brunch. Whatever you've got a hankering for.

UN: Can you honestly imagine eating your cousin Bernice? 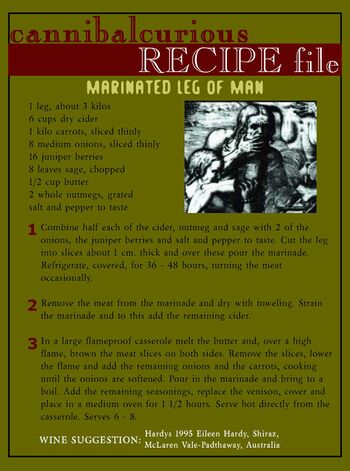 Sallinger: I don't have a cousin named Bernice. He's called Bertrand, actually. Or he was. I've taken to calling him "Memorial Day Feast plus leftovers." Usually just "MDF" for short. But to answer your question, can anyone honestly imagine the sensation of flying in an airplane until they actually do it? No. Like any experience, it must be approached with an open mind, tried, and reflected upon.

UN: How do you cook a person?

Sallinger: Now, see, you're doing it again. Language, my good man. Semantics! It really is everything.

UN: Sorry, I'll rephrase. How do you cook bipedal livestock?

Sallinger: Well how do you like it? Raw like sushi, slow cooked and tender, or char-broiled? Hamburger or filet mignon? It can be haute cuisine or greasy spoon. It's up to individual tastes, really.

Sallinger: Got plans for dinner?

UN: Thanks, but I'm not very hungry.

Sallinger: You're quite a dish — did you know that? Pardon my forwardness, but my breath quickens and my mouth salivates at the mere sight of you. The scent of your sweaty brow is a bouquet for my nostrils to partake. Are those leather shoes?

UN: I beg your pardon?

Sallinger: Leather. It's wonderful. So many people wrap themselves in man-made coverings these days. It's a crime, really. Nylon, polyester, vinyl and plastic. It positively chokes the human skin. Spoils the flavour, it does...

UN: I'm afraid that's all we've got time for today.

Sallinger:...but feet wrapped in a tanned hide, a nice cotton shirt and trouser set, perhaps a wool jacket on top... now there's a natural way to preserve the juicy bits underneath.

Sallinger: Oh, do sit down. You'll be delightful. A light olive oil, some finely chopped rosemary leaves, a few cloves of garlic, fresh milk, ground polenta, real creamery butter, a dash of raspberry jam, and let's not forget the fava beans. Perhaps a nice Chianti to make it sing. You'll be an absolute showstopper, I promise. It's a pity Idi Amin passed away. He always loved to savour a long chew on tender bits of meat like you. And the stories he would tell? I've never had better dining conversation. Now, come along then...

Announcer: Ah! Hah-hah. Yes! Today's program was brought to you by the kind people of Se7en Farms — offering a complete line of gourmet dressings and marinades guaranteed to suit even the most discriminating tastes! Quality and family tradition you can taste, since 1884. Se7en Farms — ask for it by name.

Now with fewer calories! Widow(er) meat is often dry, as some specimens refuse to eat.
Retrieved from "https://uncyclopedia.com/w/index.php?title=Cannibalism&oldid=6071055"
Categories: