“The idea is to hang out together, find fun with broads, eat some washed-up putz, and have a great time. We gotta do what we enjoy.”

A Celebrity Roast is a culturally sanctioned rite of passage still practiced amongst the ranks of legendary elite, though to a much lesser degree today than during the 1960s, when it reached peak popularity under such iconic adherents as Frank Sinatra, Dean Martin and Sammy Davis, Jr. 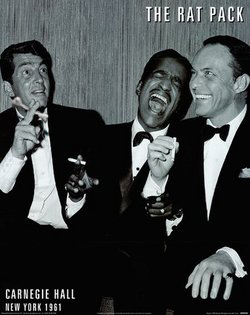 Once upon a time, in a mythical land far, far away—Hollywood, California—there existed a pantheon of gods and goddesses. Beautiful but fickle, their attentions flickered like the stoplights that guided the passage of their silver chariots.

By the tenets of this ancient civilization, it didn't need to be real, it just needed to sound good on paper and make for great film. And so it was that one day there was talk around the studio water cooler of a practice amongst certain Inuit ("eskimo") tribes of mortals of a sacrificial end-of-life ceremony. When a person had reached the time in their life when they ceased to be a contributing member of society—and instead represented a burden to others—they would graciously end their own existence for the benefit of the community.

The mightiest of the gods, Frank, loved it. His chorus of studio executives-in-waiting loved it. However, as the concept of some schmoe just wandering off to freeze to death on an iceberg lacked a certain "je ne sais quoi", it was decided that the ritual would involve higher stakes, and emphasize dining and entertainment over tangible benefit. 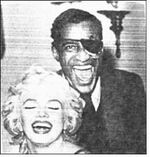 Sammy Davis, Jr. (right) was allowed to back out of his scheduled roast in 1954, in return for his left eye, and an agreement to do the Pre-Opening Report for the live television special of Disneyland's opening day. Marilyn Monroe (left) was eaten 8 years later.

While many may be familiar with The Dean Martin Celebrity Roasts broadcast to mortal audiences on NBC on Thursday nights from 1973 to 1984, these are G-Rated edited for content versions, in no way accurate to the practices pioneered and perfected by Frank Sinatra and his Rat Pack of immortals.

To ensure an experience worthy of the Hollywood mystique, Frank Almighty devised a mass insultation ceremony by peers, followed by death, basting, stuffing, roasting over an open fire, carving, and serving of the remains to those gathered with their choice of two sides: Cole slaw, small salad, baked beans, corn, mixed vegetables, or secret recipe celebrity stuffing with "mystery giblets". Don't ask.

"The comedy warm-up ain't just good entertainment, it's good cooking," Frank explained. "If you've eaten a steak that wasn't properly marinated, you know where I'm coming from, baby. It's tough, and tough don't taste good. But fear? Fear is the nectar of the gods. My nectar! So, find some schmuck, make 'im laugh, loosen 'im up, kill 'im and grill 'im. That's entertainment, baby!"

In response to queries about the selection process, Sammy Davis, Jr. replied, "Frank takes care of that. All I know is that if he says you're finished, you're finished... unless you're willing to part with something big. Like your left ey- hand. Or your dignity. Maybe both."

When asked for some of his favorite recipes and Celebrity Roast memories, Dean Martin in a fleeting moment of sobriety said, "Ask Frank." And so we did.

"You gotta tailor the recipe to the bupkis you're grilling," Frank warned. "Use you head. I mean, can you imagine Ernest Hemingway in a beer barbeque sauce? No. You save that for a hep macho cat like Rock Hudson.

"Personally, I've always preferred spit roasting. There's something powerfully moving about watching a contemporary slowly rotating over a bed of charcoal briquettes that you just can't match with oven or underground roasting. And I always retain the carving privilege. It keeps the mooks in line."

"Hoosier boy. Arrogant son of a bitch. He was good with whole cobs of roasted corn on the side."

"Rock 'n Roll was the most brutal, ugly, desperate, vicious form of expression it was ever my misfortune to hear, but Buddy was a good one. Tender and unpretentious, not tough and stringy like some of them. I ain't into eatin' bugs like those tribesman do, so I had 'em hold the Crickets. Big crowd that night, so we served some Tex-Mex on the side."

"A satisfying one. More infamous than famous. We served him with kraut and finished with Matzoh Meal Apple Cake for dessert. Almost choked to death on his stupid wristwatch."

"What can I say? I had my eye on this dish for a long time."

"I'd never eaten African before. It was good. We whipped up a special slaw for the occasion that's been the standard ever since."

"I had a hankering for a taste of the old stuff, but she disappointed. On the screen or on a plate, she really was a poor man's Marilyn Monroe."

"Not famous and not my usual taste, but Ted Kennedy had a hunger for her, so we did it. After a few bites I had to push my plate away. Tasted plain, and way too moist. I had a yen for something Asian, maybe Bruce Lee. Should have gone with it then, but he still made a dandy dim sum in 1973."