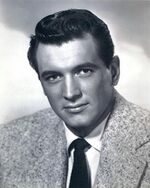 Rock Hudson - If he was gay, he would've been named "Steel Magnolia" or something.

Rock Hudson (November 17, 1925 – October 2, 1985) was an American actor, famous for his manly, lumberjack appearance and an unwavering masculinity that makes sissy-boy Johnny-come-latelies like Vin Diesel look like tea-tray boys or beauty parlour estheticians in comparison. 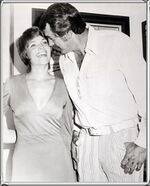 Rock Hudson with a moustache (which gays never have), standing next to a woman. One of potentially thousands of such photographs of him with women that we could have shown you, so don't think that this is the only one or something, because there's more where this came from.

By special arrangement with Almighty God Himself, Rock Hudson was born "Roy Harold Scherer Jr." in Waukegan, Illinois. He was originally to be delivered in Winnetka, Illinois, but didn't like the sound of the place. Too tinny. Try it yourself. "Winnetka." See? Tinny. Now Waukegan, there's a good, woody sounding name. WAH - KEE' - GUN. No question, it was the right choice.

He wasn't particularly keen on the name "Roy Harold Scherer Jr.," but God wouldn't budge on that. Still, you've got to admire anyone that can haggle with the Supreme Being over their designated birthplace. Such was the pull that the man had, even in his pre-foetal stage.

But, the name "Scherer" continued to be a source of iritation for the boy. It reminded him of sheep, and for whatever reason, he didn't want to be reminded of sheep. So, at the age of 7 he challenged his father to an armwrestling match over custody rights. When his old man picked himself up off the floor, sobbing like an effeminate coward, he was forced to grant Roy his freedom.

While shopping for new, potential parents, Roy experimented with a number of names. Gerald Fitzpatrick and Patrick Fitzgerald were early contenders, but eventually dismissed because they sounded "too gay". He was later adopted by the Fitzgerald family, but elected to keep the name "Roy".

After being discharged from the United States Navy, an experience he would later say changed him forever — though he would never specify exactly what that meant — Roy acquired a social disease Hollywood audition and landed a tiny role as a Seaman in the 1948 submarine epic "Yoo Hoo Under the Big Blue". However, his agent was concerned that Roy's image might be perceived as "too Irish", so Roy changed his name to "Rock Hudson" because some flaming queer had already got dibs on his first choice, "Mountain Pacific".

Rock met Douglas Sirk, a director of "women's pictures" — so-called because they were classic love stories constructed with romantic archetypes. Hudson, who one anonymous industry giant once estimated could make a woman moisten her knickers from a range of half-a-mile, weather permitting, was for all intents and purposes, the leading man archetype.

It was to launch a stellar film career for Hudson, who went on to star in a series of classics including the unforgettable 1957 picture, "A Farewell to Arms" written by his close friend, father figure, and sugar daddy cycling partner, Ernest Hemingway.

According to his publicist, Hudson was the subject of a number of startling rumours, particularly in reference to his sexual behaviour. These were quickly quashed at the time, owing to the need to protect the studio's investment in his career. 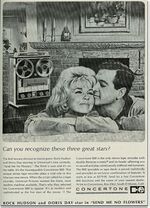 Rock Hudson kissing Doris Day - For the love of God, what more proof do you need?

Some of the best substantiated stories relate his numerous visits to fraternities sororities like Alpha Delta Phi (ΑΔΦ) — which Rock purportedly called "Sordidities" or even "Sodomities".

Without going into unnecessary detail, it can be safely said that Rock paid each of the ladies a personal visit in turn, providing them with complete satisfaction, in alphabetical order so as to avoid any cries of favouritism or queue-jumping.

Years of cigarette smoking, heavy drinking, marathon crocheting, and gang-bangs with packed rooms of sweaty co-eds left Hudson an utterly spent, but satisfied man. However, it also left him with liver cancer and greatly affected his appearance.

As a personal favour to friend Doris Day, Rock agreed to speak out about another emerging health issue, the AIDS virus. With no reason to believe that his legendary virility and utter sexual domination of women could ever be called into doubt, Hudson began educating the public about the risks of promiscuity. According to his publicist, this was completely taken out of context and gave rise to the completely false erroneous unprovable idea that Rock Hudson was actually gay, and that the fraternity sorority college organization he'd allegedly been fooling around with was actually filled with attractive, sweaty, willing, morally ambiguous young men.

Rock Hudson with a woman. Well, she's gone, but she was there. She's just camera shy. And needed to powder her nose. She's probably even married, and didn't want her husband to find out.

After a tête à tête with his laywer Maury Shyster (also not gay), then a one-on-one with his agent Isaac Teivel (just pillow talk), and finally a ménage à trois with the both of them (strictly to discuss his career), it was decided that it would be best for Hudson to spend at least one year dead — for tax reasons, and to see if inaccessability would lead to increased demand.

Don Ameche, Hume Cronyn, and Wilford Brimley saw their chance to corner the "old guy from that movie" market by starring in "Cocoon" in 1985. Meanwhile, Pat Morita was raking in money hand over fist in "The Karate Kid", Part I and II with his "wax on, wax off" schtick. William Shatner and his posse of typecasts chimed in with "Star Trek IV: The Voyage Home". By the time Rodney Dangerfield appeared in "Back to School" in 1986, it was all over but the shouting — the silver screen was already too saturated with silver hair.

While special interest groups continue to claim that Hudson died a martyr's death, Hollywood insiders know the truth — the man's just being difficult. After being given numerous opportunities to re-establish a career, his excessive salary demands and need for complete creative control has resulted in a number of near fatal ends to high profile movies:

A man finds himself hostage on a train that will explode if the speed drops below 50 MPH. He seizes the opportunity to push his annoying mother from the passenger compartment and claim it was an escape gone wrong. Script later split into two parts and released as: "Throw Momma from the Train" (1987) starring Danny DeVito and "Speed" (1994) starring Sandra Bullock.

The touching story of a cantankerous old Jew who lost his driver's license after hitting too many trees, and whose only friend is a black chauffeur only there because he's paid to be. Rewritten as "Driving Miss Daisy" (1989) and starring Jessica Tandy, and later reprised with a male lead by Billy Joel.

"The Check's In The Mail"[edit]

Geezer on social assistance decides to address his food crisis by inviting his neighbour over to dinner, as the main course. Rewritten as "The Silence of the Lambs" (1991) and starring Anthony Hopkins.