“What the fuck is this place?”

~ Abraham Lincoln, upon his arrival in Illinois

“Buy one senate seat, get one free!”

Situated on the windswept steppes of the American Midwest, Illinois (pron. "ill-annoy") is one of the 50-odd U.S. states. Noted for its varied geography, rich history, brilliant literature, unique biology, exciting Phys. Ed., and endless fields of corn. No, wait, that last one's Iowa. Illinois is often mistaken for Camryn Manheim from the side.

Illinois used to have lots of coal mines, but the tornado plague of aught-4 sucked all the coal away and deposited it in Iraq. Now, Illinois' greatest export is Barack Obama.

Illinois is being eroded on the North-East by Lake Michigan. The largest city in Illinois is Chicago. Illinois is home to the Oprah Winfrey Show, McDonalds, and Barack Obama. Illinois is a Virgo who loves pets, but hates smokers and overweight women. Illinois likes long walks on the beach, but unfortunately, the beaches have been closed because of high bacteria levels.

In the deep, deep, south, or "little Ho-Bag Egyptian Chick", there are a few hills oddly shaped like Janet Jackson's breasts. (Scary, innit?) Also, Egypt's own capital, Cairo, was relocated there circa 1500 B.C. by King Tut after he became bored of Egypt's crappy terrain.

Illinois is divided into two sections, Chicago, and "downstate", also known as "Not Chicago". Politics between these two parts of the state are contentious. 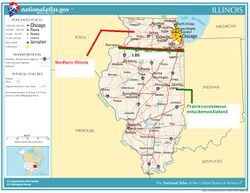 Illinois was founded by the chief of the Illini people Chief Illiniwek, who recently was killed by a brigade of guilty white liberals, using "Native American" protest as a cover. This noble and wise leader was quoted as saying: "After I die, please use my name as a mascot at sporting events. Have some white guy dress up in a costume that has nothing to do with my culture, and dance around at halftime!" and "Duhnt da da Dananana da Duhnt da da Dananana da!" (vaguely Indian sounding Tomahawk chop song).

In 1491, Raymuendo LaGrange discovered the land which is now known as La Grange Park. In 1492 La Grange Park fell under the control of a dictator known as Sir Phillips, a Viking warrior. He ruled with an Iron fist using advanced technology for the time like hand cannons and other ballistics to conquer surrounding villages until his death in 1753. Unfortunately, before his death he burned all documents regarding his leadership and town history. The Empire fell apart and the town was unstable until a leader known as Cautious Casey of PleasentVille promised a new kind of hope for the citizens in 1759. In the Winter of 1759 He instituted The WALL program that was to put citizens to work by building walls and fortifications that isolated the village from the outside world. Nobody was able to go beyond the walls because Cautious Casey told them that there was bad things beyond the walls. The program was completed in 1761. La Grange Park was flourishing under this rule until all resources were used up and the citizens and the leadership starved to death in 1775. La Grange Park was a barren wasteland until it was re-discovered by Prokaskius III in 1813. His militant Fascist regime tore down the walls of Cautious Casey in 1815 because they suffered decay and were significantly outdated. Prokaskius the III lead his people in a similar way that of Cautious Casey with building citizen infrastructure, however a Wall Program was not instituted. In 1822 Prokaskious III initiated a campaign to spy on it's citizens fearing a revolution. Many people were rounded up and taken to extermination camps in the Northern most part of the town. A band of revolutionary citizens lead by the Lord Metz fled to the southern woods and established many guerrilla warfare outposts. In October of 1823 Prokaskius III wanted to end the guerrillas so he sent out a regiment of Calvary Scouts to the southern woods. They were ambushed and slaughtered relentlessly by the Poslamists led by Arch Duke Posluzny on their expedition to the Westchester Settlement. Prokaskius III mobilized his Elite Black Hand army to neutralize the revolutionary Citizens led by Lord Metz and the Poslamist regime led by Arch Duke Posluzny. Fed up with the Lord Metz and Arch-Duke Posluzny now being allies, Prokaskius III declared a major unconventional war against the team, which has ravaged the land ever since.

In 1673, Father Jacques (Black Jack) Marquette (French-born missionary of the Jesuit order and part-time pimp), Louis Joliet (it's pronounced jo-lee-et damnit!), (Canadian goalie and mapmaker), and John Lennon (British songwriter and God), were the first Europeans to view the land on which the City of Chicago was to stand. It was there, they met with Illini Chief Wipes Without Leaves along what is now the Chicago River. Wipes Without Leaves greeted his new visitors with welcoming, unwashed arms, and assisted them in traversing the region.

The Illini were later run out by the coming of the Americans (although the French technically arrived first, it's amazing they managed to defeat anybody, let alone Indians). It was the Americans who founded the City of Chicago on a place the Indians called "Place of the Stinking Onion" (seriously) which later was renamed "Place of the Stinking Sports Teams" for obvious reasons. A few years later Abraham Lincoln was born in a log cabin in some other state (Kentucky), but moved to Illinois to get away from the constant under aged cousin marrying, and because people there were FUCKTARDS. In Illinois he founded the city of Springfield, which would later gain prominence as the home of The Simpsons. Lincoln gained fame by challenging Kirk Douglas to a series of debates, the oddly and randomly named Lincoln-Douglas Debates. When Lincoln won, Oscar Wilde quipped "That Lincoln was a master debater!" Lincoln used his fame to be elected President. This started the Civil War.

In recent years a movement has begun in Illinois to forcibly remove the largest city from the state. Led by the elder statesman Chuck Ficago (rearrange the first consonant sounds of each word to form a true statement) the movement emphasizes the annoying stupid jerkiness of the Windy City. 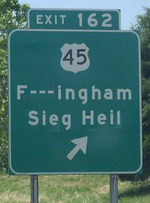 One of the funniest and worst signs ever made in Illinois. See Effingham for more.

Illinois is an amazing natural wonder where corn and soy beans grow wild on the prairie and can be seen in their natural habitat called "farms." Illinois is home to, like, a zillion deer, plus probably some birds, and squirrels (including the odd, white ones in Olney), softball-sized pigeons in Chicago, University of Illinois students, and other crap, including, but not limited to, the famous bald-balled eagle and some more corn and soy beans. Did we mention all the corn and soybeans? Before the Ministry of Biological Mutation Science was burned to the ground by outraged citizens, La Grange Park was Illinois's top contributor to biology. Results of the M.B.M.S. include: cloning, cures for cancer, and necromancy.

Illinois was the birthplace of many famous writers, including Carl "Ryno" Sandburg, who wrote poems and played for the Cubbies; that dude who wrote "Spoon River Anthology," who was famous for writing "Spoon River Anthology,"; and James Jones, the From Here to Eternity guy, not the "Let's go to the jungle and drink poisoned Kool-Aid" guy. (He was from Indiana!). Literature is readily available in all towns but La Grange Park and it's satellite territories. Prokaskius III has placed a strict ban on all books, painting, etc until they are reviewed by the Ministry of Arts and Literature so they cannot be misinterpreted as propaganda sent by Lord Metz. Any citizen caught with books or art not approved are sent to live in War Memorial Park for four days. This punishment is considered by most to be worse than death.

Drivers would be crazy by looking at that street name.

Illinois boasts hundreds of thousands of miles of roadway, almost 1.7% of which are in drivable condition at any given time. The rest are under construction, fueling the state's economy by adding needed jobs in the road construction industry, and the Illinois Political Patronage Brotherhood of Sign Holders and Shovel Leaners, which depends on constant road construction for its continued existence. To maintain the roads in this condition, state law requires concrete to contain at least 35% white corn meal (cleverly subsidizing the Illinois farmer as well as the road construction industry). It also mandates tar products to be replaced with black licorice in the manufacture of asphalt. During summer months, hapless Illinois home-owners across the state obtain big brushes and squeegees, and can be seen coating their driveways with a new layer of melted black licorice, vainly but valiantly attempting to prevent them (the driveways, not the home-owners) from disintegrating into gray pebbles. This explains the popular saying: "There are two seasons: Blizzard, and Tornado". Also synonymous with "Winter and Construction" in the North.

More people die on Illinois roadways than those who die from AIDS in Africa This is primarily due to hit-and-run rapist Ronald Reagan, who has accounted for more than all of the deaths and who remains at-large.

FACT: 4 out 5 Wisconsin Drivers would rather drive via South Dakota than drive through the state of Illinois.

FACT: 5 out of 5 Illinois Drivers are fine with that.

FACT: La Grange Park's leader Prokaskius III placed a ban on all automotives so they do not use gas. reason being, all fuel goes towards tanks and other war machines. Citizens caught driving are removed from their vehicles and run over by said vehicle. Citizens are encouraged to walk or bike but horse drawn carriages are acceptable.

Illinois is home to numerous sports teams including:

(This was changed in 2004 from "Construction Ahead" after it was discovered that more Illinoisans knew their state motto better than other people in their respective states.) 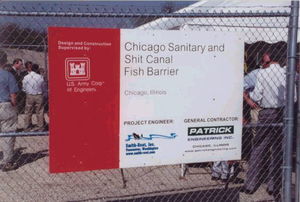 Millions of people are lining up to defecate at the famous Chicago Sanitary & Shit Canal. 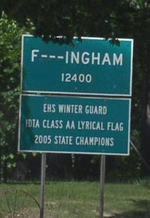 Fake prison inmates made out of wax inside the Joliet Correctional Center aka Fox River.