Woodstock or Stoner Christmas is the one time of year that potheads, acidheads, and the occasional meth-addict get to huff their kittens in peace. This holiday is held for three smokey days. The day after it's over, August 18, is the best day for convenience stores, since munchie craving potheads ravage the streets for cheetos and haagen dasz ice cream. 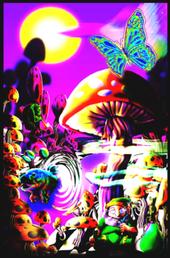 The south pole, according to woodstock fans

The anniversary of The Woodstock Festival ("An Aquarian Exposition") is celebrated, because a man named Max Yasgur had a field with literally one billion pounds of cow shit dumped on it. A hill of shit sloping down to an incredibly polluted pond. "Damn I need some rich New York jackass to come by and pay rent on 500,000 tons of cowhshit. I know, I'll only charge $25,000 a day!" Sure enough Michael Lang drove up looking for the perfect quiet spot for a pot party. One thousand hippie stoners smoking bales of the best weed ,i.e. "shit", in the world, drew every freak within 500 miles. The Supreme Overlards of the counter-culture revolution, The Beatles, ran the whole deal. Other sources say they were on a different continent. Bullshit; The Port-O-Potty Guy was their pointman. Who could resist sliding down a huge hill of shit into an industrial waste sludge pond? Even with naked babes shaving their pits? The Who, of course. Goddamn white jump-suit wearing poof Pete Townsend said "Bollocks to one and all, where's my fuckin' money?"

It is celebrated on August 15-17 starting at 4:20 each day(since that's when Jimsonweed bust). The usual ritual for celebration is to get your entire family and a hukkah with your choice of pipes and to continue to smoke your brains out until the holiday is over. You may do other drugs or huff kittens if you wish, but you must always start with weed, since it was the first drug Jimsonweed made. BE CAREFUL THOUGH!!! There have been 0 reported deaths! 0!!! That totally makes weed a drug![citation needed]

Cheech and Chong, the original harold and kumar.