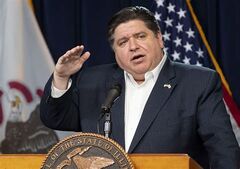 In 2019, the Chicago Tribune reported that Pritzker "filled two seats on the state Gaming Board — one for each chin.

Jay Robert "Jelly Belly" Pritzker (born January 19, 1965) is the Governor of the U.S. state of Illinois, and the fattest health expert in America today. Jelly Belly Science is a variation of Faucism: a strategy to incompetently kill 20 people to save 1, referred to as the 20:1 School. Pritzker is a self-made man, having inherited billions of dollars with no help from anyone. He spent some of this cache buying the highest political office in the most corrupt state in the United States. In 2022, Wikipedia stated that Pritzker was the 43rd Governor since 2019, as Illinois' political chaos is driven by having about one governor per month. 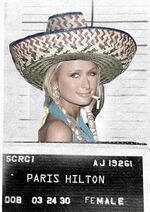 Blagojevich also fancied Hilton (pictured), but the prison declined his request that she be his cellmate.

As a hotel heir, Pritzker was inspired by Paris Hilton but wanted to be her antithesis. So, instead of being an anorexic whore, he gained as much weight as he could. After hearing that Hilton's beauty was not what the general public disdained, Pritzker told CNN, "Too late now. Has she run for office?" and subsequently bought the governorship of Illinois.

The office was available at a deep discount, as its previous occupant, Rod Blagojevich, was conducting negotiations on the sale of the Illinois seat in the U.S. Senate when he suddenly found his own seat up for bids. Consequently, Blagojevich ceased wheeling and dealing much of anything except, some days, his meal stipend at the Federal Penitentiary at Englewood, Colorado. He was pardoned in 2020 by President Donald Trump. However, with the Coronavirus pandemic about to hit, Trump forgot to give Blagojevich the Governorship back, which would have dislodged Pritzker faster than a crowd gathering at the pasta buffet.

For those without comedic tastes, the so-called experts at Wikipedia have an article about J.B. Pritzker.

Pritzker's mansion is officially uninhabitable, as it has no toilets. In 2018, NPR charged that Pritzker removed these to artificially lower the mansion's value so as to dodge property taxes. However, listeners must take NPR reports with a block of salt — before "J.B. the Hutt" wolfs it down without even chewing. The actual fact is that his fat ass broke each toilet, each time occasioning a shower of ceramic shards that could have been very painful.