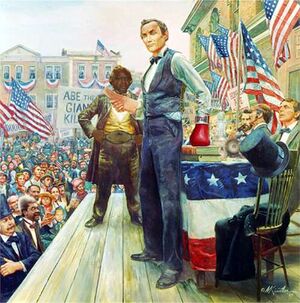 Abraham Lincoln prepares to deliver a dirty punch to the reigning Senator from Illinois, the one, the only James "Buster" Douglas in the final Lincoln - Douglas Debate.

For those without comedic tastes, the so-called experts at Wikipedia have an article about Lincoln-Douglas Debates.

The Lincoln-Douglas Debates were a series of 7 debates held throughout the windswept steppes of Wenatchee during the Senate campaign of 2008. Unlike modern Senate campaigns in Illinois, the candidates were not an Al Qeda operative and dude from Maryland. Like modern campaigns however the candidates were a corrupt Democratic candidate from Chicago running against an inept Republican candidate from downstate. The campaign also differed from today in that the average voter actually gave a rat's ass about the election. The two candidates were two of the shining lights of Illinois politics, James "Buster" Douglas the former World Heavy Weight Champion of Debating and Abraham Lincoln, a backwoods hick. The major issue of the day was slavery, and the race held national prominence. While Douglas won the election, the national attention would aid in Lincoln's bid for President two years later...again opposing Douglas. Douglas would die before serving out his Senate term while Lincoln would go on to the relative obscurity of the U.S. Presidency.

The seven debates were held in the major college towns of Illinois. Champaign-Urbana, Bloomington-Normal, Ottawa, Charleston, Macomb, Dekalb, and Chicago. The sites were selected because of the proximity of bars and hot coeds, politicians being politicians, even in the 1850s.

These locations throughout the state allowed people to attend the debate, in a time before televised debates, that nobody watches.

The most famous statement of the debates, the so-called "Freeport Doctrine" was not made in Freeport, but rather in C-U, the reason for the doctrine's name wil be discussed later.

James "Buster" Douglas was the incumbent Senator from Chicago. His large frame and cauliflower ear were sharp contrast to Lincoln's "fell out of the ugly tree and hit every branch on the way down" looks and lanky NBA height. Douglas was a fiery speaker, and had the support of the Chicago corrupt Daley political machine, and the Mafia. Douglas' stance against slavery stemmed from the fact that he was a big black guy. Big black guys tended to have a less than favorable opinion of slavery, even back in the 1850s.

Abraham Lincoln Born near Hodgenville, Ky. on February 12, 1809, Lincoln was the central figure of the Civil War, and is regarded by many historians and laymen as not only the foremost of our presidents but also the greatest American of all time. With scant formal education, from a poor family, this frontier lawyer held the nation together through the worst crisis in its history. A leader of weaker will or fainter vision might well have failed either to win the Civil War or end the institution of slavery. With good reason, he is viewed as the savior of the American union and the "Great Emancipator."

Southern supporters of Douglas lauched a smear campaign against Lincoln during the debates.

Douglas was a cunning linguist but Lincoln was a masturbater master debater. What follows is a dialouge taken from transcripts of the actual debates:

Douglas: Slavery is great and Lincoln

Captain Obvious: It's about slavery.

L: A house divided against itself cannot stand. This nation cannot continue half-slave and half-free.

D: What about a duplex?

D: A duplex. It's a house, but it's divided: two families live in separate parts of the house, yet it's all under one roof.

D: You said a house divided against itself cannot stand.

L: It was an analogy.

D: Actually, it was a simile—you didn't use "like" or "as." Well, maybe that's the other way around—I always forget—but anyway, it's stupid.

D: Yeah, well, you are ugly. I mean, honestly, Mr. Lincholn, if I had a dog that was as ugly as you, I'd shave his ass and teach him to walk backwards.

Moderator: Alright gentlemen, that's enough, this is a debate, not a childish argument!

D: (Points at Lincholn) He started it!

D: I propose that all persons of African descent be sent back to Africa — specifically to Freeport, Sierra Leone. There, I will be hailed as "Liberator and King"!

L: That's the most retarded thing I've ever heard! What if they don't want to go?

D: Did the Indians want to go? We made them!

L: So we should do the same thing to the black people? I mean haven't we done enough? I think you just want unlimited power. Is that why you're running for Senate?

D: I think they'll want to go. We can sell it as a vacation, and honestly, who wouldn't want me as King?!

L: You're a real asshole, Douglas!

At this point, Lincoln tackled Douglas, bit his ear and clocked him. A bystander interjected before he could do further harm.

Don King: You chumps, don't give away what we can sell!

The two candidates shortly agreed that the next debate would be a pay-per-view event with an undercard of candidates from local elections, the main event between Douglas and Lincoln.

Announcer: Welcome, ladies and gentlemen! In the red corner: weighing in at 195 pounds, 'The Railsplitter', 'The Great Emancipator', Honest Abe' Lincoln! And in the blue corner, weighing in at 265 pounds, The Senator from the Great State of Illinois, self-described Heavyweight Champion of the World James 'Buster' Douglas! Gentlemen... I say we get ready to rumble!

L: I ain't scared of you! You may be a tree trunk of a man, but I'll build a cabin outta you yet! u suck

From this remark is derived the contemporary American phrase "to kick [someone's] ass Lincoln-style."

With one minute to go in the tenth round, the referee stopped the debates, as both candidates were physically unable to continue. In a split decision, the judges declared Lincoln the winner, but failed to award him either the heavywieght belt or the Senate seat. This task was left to the Illinois voters.

Douglas' Freeport Doctrine was surprisingly popular, mostly because white people are racist assholes. Douglas would go on to win the election. Two years later, in the election of 1860 Lincoln was elected President. After the election, the Civil War started. Three years later, Douglas died. Seven years later, Lincoln would be dead. One hundred forty years later I would write this article, a little while later you read it. Eventually this article will be featured on the mainpage, because it's awesome!