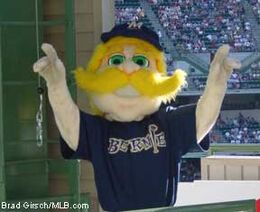 “Yeah they suck, but they suck with beer”
~ Oscar Wilde on the Milwaukee Brewers

“DUDE! I was expecting quality beer. The Brewers show no quality when it comes to beer, much less in actual baseball skills, man.”

“This team sucked, until they paid me $105 million to play for them till 2020. Now they're my byatch. I hope they won't find out about my roids”

The Milwaukee Brewers are an NBA team. They play in Milwaukee,WI the beer and blaze orange capital of the Midwest. They were most recently led by Ken Macha, an evil worshiper of Pikmin that will try to destroy us all!!! However, they are now led by some old gasbag from the Anaheim Angels bench. Their fans are known for time traveling back to 1982 to relive the only year that they didn't suck. They became the Milwaukee Brewers after corrupt demi-god Bud Selig kidnapped the team from Japan with the help of Wedge Antilles, Mr T, Jack Bauer, Rainbow Brite and Samuel L. Jackson. (Jackson was there simply because the others didn't swear enough). Of course, Selig being a Dark Lord of the Sith, kept all of them under the belief they were helping a third world country. This act is said to be Japan's reason to bomb Pearl Harbour....That and Ben Affleck's bad acting.

Later Selig managed to over throw the commissioner of baseball and install himself in his place. From what is known, this act of taking control of the baseball galaxy was where George Lucas came up with the story for Revenge of the Sith.

Because Selig has never wanted to spend any money on this club, the Brewers have adopted a system of keeping the club running without having to spend a cent. 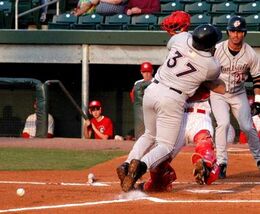 DO YOU KNOW WHO I AM?? IM THE JUGGERNAUT BITCH!!!

The Fonz and the Brewers[edit] 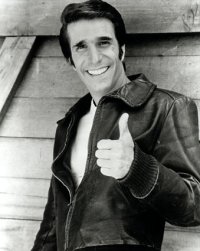 Soon the Fonz was considered one of the best managers in baseball. He would win every argument with umpires and opposing coaches simply by saying "aaaaaiiii". Also the Fonz became popular with the female brewers fans which in turn made the male Brewers fans happy that the female fans were at the game. Selig knew that he had to act fast. The Brewers way was in danger. He quickly fired Fonzarelli and replaced him with Fonzarelli's bench coach, Scott Baio.

This started the years of Charles in charge and the Brewers fans were pissed again, keeping the Brewers way alive to this day. Despite many offer from other clubs, the Fonz never managed another big league club. Instead he left the game happy and with half of Paul Molitors 1982 crop. They got very high.

Hope for players who haven't been paid yet[edit]

Selig sold the club as a way to throw off the Jedi council, who were getting wise to his plans of domination. It was sold to a Mafia gang warlord by the name of Mark Atinassio...nnatopa....lopez...ma......A guy named Mark. One of Mark's first orders of business was to keep career leg breaker Doug Melvin as general manager (This is the part where in an idiot Brewers fan shows up to make retarded claims about their club being good) as well as getting in Cow rustler Carlos Lee to play on the side. But Melvin was forced to trade Lee after he and Lee's agent couldn't agree on a contract extension. Lee's agent was after a small country. Melvin was offering a pack of gum.

For the religious among us who choose to believe lies, the self-proclaimed experts at Wikipedia have an article about Milwaukee Brewers.

Mark being a made man has promised the people of Milwaukee that the money he and the family take from them will go back into the team at some point. What point that is, is still unclear. Two players did come forward looking for back pay, but since they did, Nick Neugbouer has not been seen. When Mark and Doug Melvin are asked Nick's whereabouts they only ever say "he said he had to go shopping for some cement shoes". The other player to ask for pay, Mike Jones, has since become the most injury prone player in baseball. The once talented pitcher has managed to break his arm, leg and fingers a total of 998 times in the last two years. All the injuries he said happened when "he fell down some stairs". But still Mark's promise is hoped to be fulfilled in the future.