“Arrrrrr! Garrett Jones is on the plank, Andrew McCutchen is on the poop deck, and Andy LaRoche is in the hole. Arrrrrr!”

“IN SOVIET RUSSIA, PIRATES NOT SUCK!”

~ Lavrentiy Beria on the Pittsburgh Pirates

The name Pittsburgh Pirates refers to both the athletic club and the alumni of Pirate University (Pittsburgh) – a major league academic institution dedicated to the furtherance of piracy arts and sciences, and the preservation of pirate heritage into the 21st century.

A second campus, Pirate University Tampa Bay, opened in 1976 on the 100th Anniversary of the Institution due to the renewed interest in organized depredation, though for the purpose of distinction their graduates are known as Buccaneers.

Pirate University was originally a training camp established in 1876 by Oswald Rice, in response to the diminishing number of pirates worldwide. For lack of a better plan, Rice visited the local chapter of the YMCA in search of a few good men for his new venture.

Fortunately for him, many of those he approached were ambivalent about spirituality, and were more interested in opportunities for fun, companionship, and a bit of sport. The lure of raping, pillaging, and extended nautical voyages in cramped quarters with scores of sweaty, nameless, faceless strangers proved only too enticing to their moral and sexual ambiguity.

By 1882, Rice decided to forgo further seafaring in favor of life as a landlubber, full-time. Historical accounts disagree as to the rationale for his change of heart. Rice's personal memoirs relate that after a time, the routine of plunder, marauding and despoliation with the same recruits became too tiring. His writings suggest that he felt that by formalizing his training program into a school, he could pass along his wealth of experience to whole new generations of future pirates. However, the personal diaries of a number of former crew indicate something more sinister was at work: mutiny.

It appears that in the latter campaigns, increasing numbers within the ranks refused to submit to Rice's direct orders. While the reasons are not spelled out, the subtext strongly hints that Rice's motivations in starting a school had less to do with sharing his experiences than it did with sharing his personal collection of many varied social diseases with a new and unsuspecting population.

Pirate University is proud to carry on the spirit and traditions of Mr. Rice, and it is in his memory that the sacred initiation ceremony – The Jolly Roger – is carried on. 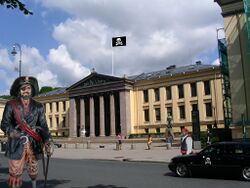 The Pirate University main campus in Pittsburgh, PA. Critics once noted that its extreme distance from the Atlantic Ocean made it a poor location choice. University officials dismissed them as "... limp-wristed pansies, too weak to portage an inflatable dingy," before dispatching a group of second-year students to hunt them down, one at a time, as part of a class project. Subsequent media coverage of the school has been unanimously favorable.

Interested candidates are required to have a casual attitude about the value of human life, and other widely embraced social norms such as the importance of honesty, hard work, compassion, forgiveness, and sympathy. Previous experience in wanton acts of cruelty is highly desirable, though applicants with an academic understanding of seminal works of philosophy, such as Niccolò Machiavelli's The Prince will also be considered.

Candidates are assumed to possess (or agree to obtain prior to orientation) relevant tools of the trade, including but not limited to: a parrot (mandatory), a hook (preferably only on one hand), an eyepatch (preferably only on one eye), a stump leg (optional), a peg leg (on the aforementioned stump(s)), bandanas (optional), pistols (recommended), a cutlass (recommended), menacing facial scars (almost certain to be received, if not already possessed), a curly moustache, and a pirate hat (required, and available for purchase at our "Pirates Of The Caribbean Bookstore and Gift Shoppe").

Students seeking the Bachelor of Piracy degree need to pass each of the following courses with no less than a grade of P, and maintain an R average overall. Those who fail to meet academic requirements are thereafter ineligible for the Bachelor degree, but may elect to transfer accumulated credits toward a Diploma in Banditry (1 year) or a Certificate in Pillaging (6 months).

Students with an AAAAAAAAA! average have the option (in their second year) of pursuing an undergraduate level thesis with the assistance of a senior faculty advisor. Some topics in recent years have included:

Bob, B. B. (2001). New psycho-therapeutic interventions in coping with quadruple amputation

The story of Pirates baseball began with some dude named Honus Wagner. His parents must've been cool freelance Dutch stoners. Then came Willie Stargell, the huge teddy bear who could hug you to death. Then came Roberto Clemente who was born on Mars despite common belief. Last but not least, Barry Bonds came in and tore over twenty new buttholes into the National League.

Although not noticeable in the photo above, Barry Bonds gained many pounds due to steroids.

Let me start this off by asking: what moron would draft John Van Benschoten and Bryan Bullington? Okay, now on to the worst 25-year period in sports history. Barry Bonds left and Pittsburgh was all pissed. Everyone became a Steeler fan and Penguin fan. Fast forward to 2011. The Pirates actually seemed to put something together, but all changed right after the annual All-Star break. They still sucked, but nonetheless, they were over .500. So one July night, the Pirates played the Braves. It was the bottom of the 19th inning, and White Cutch had already thrown 6,653 pitches. The bases were loaded and whatnot, and whoever was at bat hit a crappy groundball, and it was thrown to the Pirate most badass catcher in 20 years, Michael McKenry. McKenry obviously tagged Julio Lugo out, but umpire Jerry Meals thought he was gonna get laid if he left earlier and called him safe. Thanks to Jerry Meals, the Pirates continued to blow. In the offseason, A.J. Burnett was acquired and told Brandon Phillips to "Sit the f*** down" at a later date. Andrew McCutchen continued to look like a pothead and hit like Tiger Woods did on women. They continued to suck after being ten victories over .500 at one point in the season. The moral of this story is... please don't be a Pirates fan. That is, until 2025, when the Pirates win their 7th consecutive World Series.