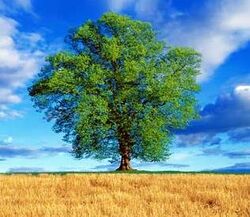 A ripe target for the hardy timber shiverer

A term brought to public consciousness by pirates and, later, Hollywood, Timber Shivering is very rarely used in its singular form. Much more recognizable is the phrase "Shiver me timbers", generally used as an expression of disbelief, understated shock or intense orgasmic pleasure. For many decades the phrase was thought to have little or no cognitive meaning, but recent studies have shown the statement to have roots traceable back to the very earliest days of mankind.

With dinosaurs wandering freely - eating all the good fruit, terrorizing smaller mammals and eloping with many an unsuspecting daughter, Prehistoric Man learned quickly that without some form of protection he would be forever doomed to subservience under the various dominant reptilian species. Hence, Man became a Maker of Tools.

Seeing trees as an abundant material for the crude construction of weaponry, Man began utilizing thick shards of wood splintered from the trunks of trees. Not having the complex vocabulary of the modern day, he dubbed this most basic of implements simply "shiv". Although now constructed primarily of plastic or steel, use of this weapon can still be observed today in many of the civilized world's correctional facilities.

Prehistoric Man was understandably rather impressed to discover that, upon plunging his shiv into the neck of the dinosaur his only daughter had so brazenly married, the offending reptilian would cease its respiratory practices, succumb to gravitational forces and promptly expire. The creature was then immediately promoted from "that bastard cock-smoking son in law of mine" to "lunch".

As the years passed, Man became prolific in the industry of Timber Shivering. A rudimentary trade, this involved felling a tree and then bashing it with a large rock. The wood cracked and splintered, the irregular and sharp pieces collected. These were then used as shivs to aid in the practices of self defense, hunting and resolving marital disputes.

A Lull in Public Usage[edit]

As the centuries passed and Mankind evolved and progressed socially, his needs changed. Womankind no longer lusted after the once prolific dinosaurs of old, settling instead for the male members of their own species. Man eventually found other materials with which to fashion lethal implements – more durable, sturdy and longer lasting. Various metals became the standard for shiv construction, and the trade was subsequently renamed. The shiv became the sword.

With the dissolution of the shiv industry, the terminology dropped from public consciousness for a while. It did, however, resurface into general usage among those involved with the fledgling-but-soon-to-be-lucrative practice of ship building. Shivering timber became an integral part of the industry (also referred to as the carving or shaping of wood for use in the making of ships), although the focus shifted slightly – timber was no longer shivered to attain a number of shivs for general use, but to sculpt it into a designated shape for use in ship construction. The shivs themselves were, sadly, discarded unceremoniously.

As Mankind became more successful in everything he attempted, however, he inevitably slipped into a more comfortable lifestyle and, with that, became lazy. The once proud practice of timber shivering was relegated to an expression of lethargy. No longer would a man be found to say: "I must go forth and shiver some timber, that I may earn an honest days wage with which to feed my budding family"; instead he would remark to a friend or co-worker: "I can't be fucked with working today. Do me a favor and shiver that timber for me, will you?"

Over time, the phrase was shortened still. Thus: "Hey Larry! Shiver me timbers! I'm going to the pub."

It was in this form that the term came to be adopted by the lawless, then 'alternative', pirate culture. 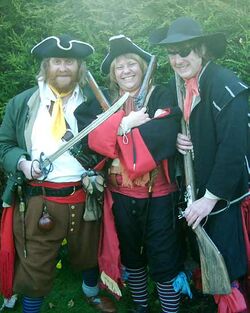 Pirates, as adorable and charity loving as they may now be, were initially somewhat uneducated, brutish and lacking in many social skills. Comprehension of external cultural diversity was not a particular strong point for the first pirates. Because of this, their initial embrace of the term shiver me timbers extended no further than the words themselves – the phrase enjoyed a booming popularity, but nobody quite understood what it meant anymore.

The actual act of timber shivering slowly died out in the ship building circuit. More advanced tools and labor practices rendered crude shivering useless, the methods and terminology replaced with the simple yet eloquent idiom, carving.

Those steeped in the customs of piracy, however, decided to keep the phrase as their own. The years of use had slowly eradicated all meaning from the words, and they became nothing more than a popular catchphrase. Indeed, in the Great Piracy Recruitment Drive of 1812, all advertising and marketing material issued bore the simple legend "Shiver Your Timbers With Us – Become A Pirate Today!". Innumerable debates within elite and learned circles rage to this very day on the effectiveness of using the slogan for this purpose, but there can be no doubt the drive itself was successful – officially published estimates place growth in the pirate sector at over five hundred percent by 1814, less than two years after the movement's start.

With the advent of contemporary birth control and the overwhelming popularity of sexual congress for pleasure (as opposed to solely for reproductive purposes), the phrase shiver me timbers can currently be found enjoying a rebirth (no pun intended) in the public vernacular.

In its most recent interpretation, timber shivering no longer bears much resemblance to its former meaning. In modern culture, if you were to encounter an individual asking you to shiver their timber, it is reasonably safe to assume they are requesting sexual intercourse. At its most basic, timber represents the male reproductive system, whereas shiver is indicative of the copulation act itself.

Public usage of the phrase is generally considered improper or taboo (unless you are a pirate, of course, in which case you are almost expected to use the term wherever possible) – akin to perhaps using the word fuck in the presence of one's grandmother. However, there are several documented occasions when the most highly respected of individuals are caught using the expression.

Of particular note was one circumstance that breached even the walls of the White House. Following the admission by Bill Clinton that he had, in fact, participated in illicit sexual relations with a Ms. M. Lewinski, the president is quoted on record as saying "So she shivered my timber. What's the big deal?"

From basic tool making to crude sexual jargon, through generations and interpretations, Timber Shivering has been proven the most versatile of expressions. Although the industry itself may have become redundant as Mankind has progressed, it is indeed impressive that the terminology is as strong today as when it was conceived. As such it should be treated with reverence and not a little respect, although perhaps with a little social eloquence in today's culture. A phrase steeped in much history, one can only guess at how the societies of the future will adapt Timber Shivering into relevance in the decades and centuries to come.