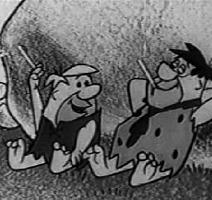 “I'm no Fred Flintstone, but I can make your bed rock.”

Frederick W. "Fred" Flintstone (born February 2, 1000020 B.C.) was a popular stand-up comedian, actor, and blue-collar quarry worker all the way back in the Stone Age. He starred in the hit 1000060s B.C. television sitcom The Flintstones, styled in the plural because his twenty-stone girth gave producers the mistaken impression that there were five or six of him.

Despite coming across as sedimentary, Fred always thought of himself as a bit of a rolling-stone. As a comedian, he specialized in very schist slapstick, rocky puns, and entire routines chiseled around wife beating, back in the prehistoric era when it used to make audiences laugh rather than get chippy. Despite working with (literally) primitive material, Fred often sold out all the shows at the clubs he performed in; in awe of his success, CBS gave The Flintstones a coveted spot on prime time television.

Flintstone was abandoned at birth in the petrifying swamps of Bedrock. He was quickly taken in by a local quarry, where he spent most of his childhood at rock-bottom with a chisel. Fred soon befriended fellow orphan Barney Rubble, son of a stoner father and a mother who liked to get her rocks off with anyone prepared to give her a hewing.

One day, while Fred and Barney were enjoying too many JDs on the rocks, they watched the first episode of new experimental comedy Scooby Doo. The lead dog's catch-phrase: "Scooby-dooby-doooooo!" stuck instantly with Fred, and he constantly annoyed the other orphans with his signature catch phrase; until Mr. Slate threatened to use a coyote to blow him up with some ACME TNT and a plunger, if he did not come up with something original. Fred changed the "Scooby-dooby" to "Yabba-dabba" and viola, an original catchphrase.

In his early 20s, Fred met Wilma Pebble Slaghoople on a trip to Rock Vegas. Falling instantly in love, he had to get hammered to get boulder to the point he could ask her on a date. The two hit it off instantly, and were married in a 24 hour drive-thru church. The new couple flew back to Chipping Sodbury to celebrate their honeymoon. Wilma became pregnant and gave birth to a baby girl. Fred and Wilma decided to name her Lucretia, based on the name of the letter carrier, with whom the baby coincidentally shared hair color.

For the religious among us who choose to believe lies, the so-called experts at Wikipedia think they have an article about Fred Flintstone.

From 1000060 to 1000066 B.C., Fred starred on the popular sitcom The Flintstones. It had the highest ratings of any show on CBS (Chiseled Boulder Stones); they experienced a drastic rise in viewers, following their excellent coverage of the assassination of Czar Raphael "Boulder" DeBrix. Fred became the richest man of his day, with a net worth of an estimated $67 billion clams. The Flintstones's theme song received immense airplay on FM classic rock radio, and many listeners requested it for BCE to come.

In 1000063 B.C., Flintstone was issued a restraining order for arriving at his home hammered at 2 A.M. and reportedly screaming at his wife. Bedrock Probate Court appointed an attorney, who said Flintstone's defense would be that he was merely rehearsing an episode of The Flintstones dealing with Wilma's purchase of a risqué new dress with revealing holes in the pelt. To charges that he verbally abused Wilma, Flintstone's public defender insists that that is a running gag in the TV program and that witnesses should have known that the steamrollers with ladders coming out of the sun-roofs with men holding squarish rocks were "filming" the rehearsal.

Not unknown to the public, Fred and Barney also shared a stoning addiction. They would often be stoning for hours before performances. Wilma states that during one show, while Fred was running in his car, he collapsed of hunger. Checking into Bedrock's sole Rockhab Clinic turned into a recurring comedy device on The Flintstones.

Unfortunately, at about the same time, the show began losing viewers, eroded by the no-longer-new experimental comedy, Scooby Doo. CBS tried many new gimmicks to bolster ratings, such as celebrity guest stars, a more modern theme, and full-frontal nudity, introduced at first using the family's pet dinosaur. These tricks slowed the loss of audience, until Scooby Doo "bared it all" as well. Soon after, The Flintstones was canceled and Flintstone had to eke out a living on his Residuals from reruns.