For those without comedic tastes, the so-called experts at Wikipedia have at least one article about Di --- no.

Friday is "Dressed To Kill Night": Half-Priced Pitchers for all who spill blood!

Dino Paul Martini & Rossi Crocetti Flintstone was Fred Flintstone's Dogasaurus. He was a dinosaur-dog of many talents and accomplishments. He is perhaps best remembered as the founder, and owner of the flagship location of, the internationally renowned dining and entertainment establishment, Dino's Bar & Grille. However, his life and career which spanned over four-hundred centuries (thanks to the miracle of time travel) encompassed so much more, earning him a permanent spot among the most famous Italian-American reptilian canines of all time.

Dino was genetically engineered in 2342 AD a lab at the University of Ohio at Mount Empire (U.O.M.E.). Biology students Hannah Montana and José Banana had been up all night drinking, smoking, dropping acid and watching Jurassic Park when they decided to break into the genetics lab and create a dinosaur. Not having any dinosaur DNA readily available, they used what they could find. Using the genes from Gaetano Crocetti, the campus barber, Sammy the Sheepdog, the school mascot, and the Art History Chairman's pet Komodo Dragon, they spliced together the creature that would be renowned throughout history. As astute readers of the DaVinci Code realize, Dino was the first living creature to be related to both Leonardo DaVinci and Leonardo, the Teenage Mutant Ninja Turtle.

The Journey to Prehistoric Bedrock[edit]

Everybody loves somebody some time, and for Dino it was a pterodactyl named Elizabeth Anne BurgerKing. Unfortunately, her visa for the 24th century was limited to 180 days and a quick marriage would only guarantee 24 hour spying by temporal immigration officials. Thus Dino chose to follow her to her own time and place, 38,000 BC Bedrock.

Though the romance didn't last, Dino found it comforting living in a time with other dinosaurs and decided to settle there. To avoid changing the past and creating a temporal paradox he decided to hide his identity as a superintelligent creature from the future. It was thus that he came to move in with a human family - The Flintstones - and take on the role of a family pet.

Still, Dino longed to do more. Opening a restaurant/bar seemed to be good idea, since pub owner was a common occupation for Dinosaurs in Bedrock. Little did he know that his unique talents would make this the most successful bar & grill ever (so much for not changing the past - screw it, existence didn't end!)

Still looking for more creative outlets, and still somewhat cautious about doing further damage to the space-time continuum, he decided to pursue an entertainment career, but only in a time when reality was already in such shambles that no time traveler's intervention would make a difference. Thus, during the day when Fred was at work and Wilma was out shopping, Dino would often travel through time to the 20th Century where, under the name Dean Martin, he achieved enormous success as a singer, actor, hitman for Frank Sinatra, seeing eye dog for Sammy Davis, Jr., and errand boy for Jerry Lewis. With Rowan Atkinson he produced a sketch comedy show known as Rowan & Martin's Laugh-In. And, of course, he was founder and Roastmaster General of the famous "Dean Martin's Celebrity Roasts".

Dino made many famous songs including "Everybody Loves Somebody but Not Me", Memories are made of Piss", Somewhere There's Someone Who Can Outdrink Me", "Inamorata", "Not Another Italian Song, Goddamnit", "If" (I don't know why the fuck he chose that title), and "That's Amoré". In 1967 a young Sonny Bono followed him back to prehistoric Bedrock where he accompanied Dino to his fabulous tavern. Upon returning to his own time and his hometown of Dublin, Ireland, Bono set up the first 20th century franchise of "Dino's Bar & Grille." In addition to being the start of a worldwide phenomenon[1], this establishment played a pivotal role in music history. It was there that Phil Lynott fresh form a jailbreak first met the boys with whom he would later from Thin Lizzy.

Additionally, Dino was an accomplished mathematician who has been credited with establishing the relationship between pi, Euler’s constant e, -1, and the imaginary number that represents the square root of –1. The following notes have been taken from his journal: 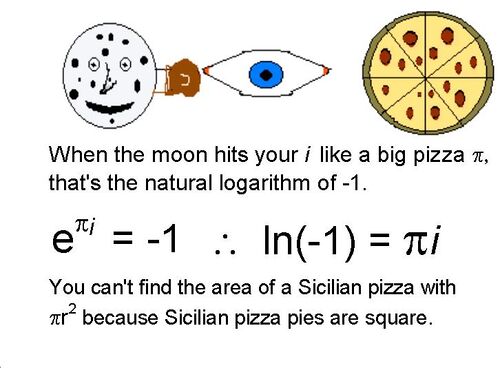 Dino later died in 1966, after The Flintstones were all abducted by Marvin the Martian's dumbass younger brother, the Great Gazoo, and unfairly experimented on. In 1994, a Puerto Rican company by the name of Kiddie's Manufacturing freed Dino's lifeless corpse, and did what Silas Stone did to his son to create Cyborg, eventually turning the dinosaur into a glorified coin-operated kiddie ride. Sadly, the music they put on the ride was an unnatural, soulless sounding version of the Flintstones' leitmotif, nine times unlike a certain bootleg Mario game's version of it, causing children to have nightmares and be convinced that Dino wasn't really their friend.