For those without comedic tastes, the self-proclaimed experts at Wikipedia have an article about Frank Sinatra. 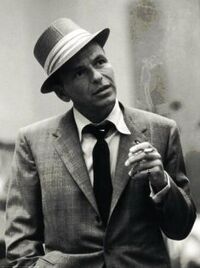 Frank Sinatra or Ol' Blue Eyes (born Swing era - died Rock and Roll age) was a famous singer, drinker, smoker, gambler, puppet, pirate, pauper, poet, pawn and king. Many critics say that his style of singing was "simply orgasmic" and "Kafkaesque". Sinatra is most famous for his song "My Way", about how he wished to become the totalitarian leader of the United States. Frank Sinatra was voted by the world, and most the people of Titan, as the number one make out music artist in history.

Sinatra was also noted for his career in the military , not only for his work on Von Ryans Express (on which he was awarded the "Fastest Railroad Disassembly Award"), but for his efforts to convert a majority of the United States Navy to a dance team.

Frank Sinatra's swagger, and overall sense of unbridled boiling Italian mafioso rage, made him an icon of popular music and drunks everywhere.

Frank Sinatra is famous, in part, because he was the last man able to make a living out of being depressed without wearing eyeliner.

It is a well known fact that Sinatra is actually God. This was verified by Sinatra himself, just because he wanted to. One of the things bothered him was that he created the world with only three dimensions (in his own words "Regrets, I had a few/But then again, too few dimensions").

Even during the early years Sinatra was a bad mother...(shut your mouth)!

Frank Sinatra was born in Hoboken, New Jersey. A highway passed by his house. One of his favourite hobbies was meticulously planning trips along this, and along all the by-ways. It was also around this time that he discovered his favorite food was tits.

At the age of 19 he married the girl of his dreams, a chick who was deaf, dumb, oversexed and operated a liquor store. And with three tits. They were divorced after he impregnated her, having never learned about the birds and the bees. Or about sex either. In 1951 he married Ava Gardner, founder of the modern temperance movement. Then Ava left him for Chiang Kai Shiek.

Frank Sinatra's show biz schedule usually involved singing for three days straight while having sex with a woman and beating up a news reporter, ALL AT THE SAME TIME. He then puffed fifty cigarettes and drank a six pack. Finally, he would go home to help raise his children and whatever wife was with him.

Sinatra also was once interested in performing with Slipknot, although the sound of distortion guitars was too retarded and poorly used by the band for him to play with. He then proceeded to kick the leader's ass and beat him mercilessly with his own stupid looking guitar.

Frank 'Impale You On Meat Hooks' Sinatra, was never far away from controversy. In 1953 he was photographed with President Eisenhower and a number of prominent respected politicians. The photograph nearly destroyed Sinatra but the affair soon blew over when the photographer, 28 year old Robert 'Crash Bang Wallop Whatapicture' Parker, disappeared without trace. Further allegations of Sinatra's alleged ties to respectable, honest people was to plague him throughout his career, though they were allegations that Frank 'Anyone Who Fucks With Me Will Sleep With Da Fishes' Sinatra always denied till the day he died and beyond. To counter act these incriminating photographs Sinatra made it a point to be regularly seen Hanging out with celebrities such as Sam 'Break Your Legs for A Dollar' Ranarto, Carlo 'My Hatchet will Tear You A New One' Gallo and the otherwise unpopular Anello 'Dung Lung Skid Pants', Spastico. Sinatra was a master at manipulating the press and those he could not manipulate were soon found in oil drums floating up the river.

He sang. He drank. He smoked. He womanized. Then he died of seasonal influenza. Then sang, drank, smoked, and womanized some more.

"The Thong Song and Other Music to Love By"
"Music for the Old"
"Mafia Sing-Along"
"The Bitch is a Tramp" (Collaboration with Eminem)
"The Best of That Guy... You Know... the One That Sings That Song... the Old One... Yeah Him"
"The Best of That Guy... And Those Other Guys... Y'know, When They Were Like... Still Together... Yeah Them"
"1 LOVE"
"I Cut Your Finger Off, You Gimme the Dough, I Smoke a Cigar (No Biggy)"
"Elaborate Lovin' and Other Such 1337 Speak"
"Album of North Korean Anthems"
"The Rest of That Guy... You Know... Those Unaired Mafia Hits (Snuff Themes Vol. II)"
"If I Said You Had A Beautiful Body, Would You Fuck Me With It?"
"I've got a crush on you (or I'll crush you)"
"Love and Marriage (nevermind, just one night stands)"
"One for my baby, one more for her lover to sleep with the fishes"
"New York, New York (and little Italy)"
"Fly me to the moon, or just fuck me"
"Without a song and without a dick"
"Bing Crosby Sucks"
"Fuck Wit Frank Day (And Everybody's Celebratin')"
"Night and Day (we fuck)"
"The way you look tonight and how much better you will look in bed"
"As Time Goes by during a handover"
"LOVE (whatever the fuck that stands for)"
"Come Fly With Me (And Unzip my fly)"
"My Way (Not on the Highway, fuckin' LIMP BIZKIT, I slept with your mother, bitch)"
"Without a Song (I smoke)"
"Mood Indigo"
"Yesterday (Better than the Beatles's version, though Elvis' version is the Best)"
"South of the Border"
"Young At Heart (And Docking)"
"Let's Fuck Like It's 1954"
"Butthole Salami"
"Frank Sinatra's Songs That Make You Want to Commit Suicide"